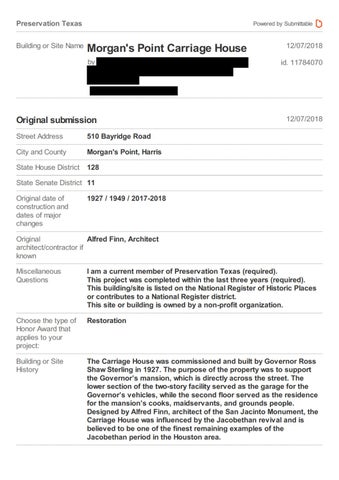 Condition of the Building Before the Project Began

After Governorâ&amp;#x20AC;&amp;#x2122;s Sterlingâ&amp;#x20AC;&amp;#x2122;s death in 1949, the property was bequeathed to the Boys and Girls Harbor, known today as Todayâ&amp;#x20AC;&amp;#x2122;s Harbor for Children. The property was largely left vacant and neglected for 65+ years. As a result, the property was in steep decline and was destine for demolition. Topographical, structural assessments, asbestos surveys and a review of the original plans from 1925 of the property revealed the structure had good structural bones and deserving of restoration. The building was known to be a solid structure being only a few hundred yards from the Galveston Bay and enduring numerous hurricanes during the last two centuries. However, the surveys uncovered serious obstacles to overcome if the restoration was to be successful. The facility was plagued with serious problems including asbestos, lead paint, terminates, honey bees which were successfully relocated, and a failing exterior. Original electrical and plumbing conveniences were seriously outdated and did not meet current building codes. The principle building design of an open-air garage and two-story facility was unmodified by others; therefore, the facility was recognized by the City as a possible open-air City Council Chambers where city business could be conducted in open view and the community could attend.

Due to the age of the building a comprehensive asbestos, lead paint abatement was necessary. Once abatement was assured the goal of disassembly and storage of items to be repurposed began including the windows, doors, and legacy hardware. Two wall sections were demolished to allow for the installation of an elevator and the creation of the reception area. The elevator was placed in the rear of the building so that the three elevations viewed by the public were of the original design in 1925. Upon removing the composite shingle roof, the original wood shake shingles were discovered. New wood shake shingles and copper flashings reflecting the period were installed. At some point after the original structure was completed the chimney and dormers were removed. In order to match the original elevations according to the 1925 plans, they were reconstructed to reflect the period. Sourced sinker cypress material was located to replace damaged cornice and stucco cladding. The interior was constructed with exposed timber that reflected the period. In order to reinforce the sagging original beams and keep the original design and appearance the timbers were jacked up and hidden steel plates were installed to serve as reinforcement. Interior walls made of v-board and beadboard ceilings were gray washed. Custom shaper and router knives were made to mill and match the original trim design. The sliding garage doors that once served to enclose the governorâ&amp;#x20AC;&amp;#x2122;s vehicles were removed and restored. The glass was carefully removed and retained. Missing or broken pieces were sourced from a salvage company in Pittsburg, Pennsylvania. The re-installation of the glass was accomplished using period glazing techniques in lieu of silicone or caulk. The original foundation plumbing was cast iron and failing. The concrete foundation that contained the failing cast iron within the building was removed and replaced with code compliant material. The floors and stairs in the Carriage House are all original. Carpet and vinyl floors covering the original floors were removed, and the original oak surface was restored to like new condition. The copper gutters around the perimeter of the house frame the property from the street. Their existing and remaining components were used as much as possible and the design was duplicated from the drawings and is an exact match. The gutters are copper 5-inch half-round and suspended from the roof with custom hangers. The gutter collection boxes and down spouts and brackets are handmade and hand crimped; taking 2-5 days each to make. The gutters were given their original ornate design and reflect the period and the plans from once they were conceived. The facility was completely rewired electrically to meet current code and contemporary data drops and plumbing fixtures that reflect the period were installed. The carriage doors are an important element to the house. When they were reinstalled custom t-astragals were fabricated so that the doors could be weather tight and open exposing the council chambers and patio as one theater for the public. Today, the carriage doors are fully functional.

One of the primary goals of the restoration project was to keep and repurpose all of the original windows. The original window frame components were kept in place and repaired where necessary. The interior casing, weights, exterior sills, stool and aprons were maintained as original. The few components that had to be replaced were hand crafted by a known craftsman. The panes were removed and reinstalled using period glazing techniques over modern day silicon and caulk. 85-90% of the original glass was repurposed. The few panes that had to be replaced were sourced from the original area of Pittsburg, Pennsylvania.

The Carriage House was built adjacent to a naturally formed creek that drains 30% of the water from the peninsula of Morgan’s Point. The creek is a natural topographic feature. Designing a civil engineering solution while keeping its natural feather in place proved to be challenging. The footprint that the Carriage House sits on is limited in size. If the new renovated project was to be used as a viable location for the new City Hall, the City would need to provide adequate parking, maintain effective drainage and develop a landscape design that complimented the surrounding historic district. As a result, an engineering solution to build a massive bulkhead to maintain the function of the drainage creek was envisioned and constructed. In addition, a major electrical supply route ran on the west side of the building had to be relocated. Electrical poles and underground utilities had to be relocated.

Major Physical The original Carriage House was designed as a non-climateChanges/Alterations controlled space. For the facility to fulfill its new purpose as a public to the Building building it would need to meet specific building code requirements. Most of the original interior and exterior design remains unchanged. The goal was to bring the building back to its original layout and design. Three primary changes were made to the building. A partition was needed for a reception area on the second flood in order to define specific office space and fire codes required that an elevator and exterior stairs for egress be installed. The stairs and elevator were placed in the back of the building from public view so that the three main elevations would appear as originally designed by the architect Alfred Finn. A dais was built on the first floor that once held the governor’s vehicles for the city council to meet. Landscaping

The Carriage House served as a support facility to Governor Sterling’s mansion. Records show that it was primarily unimproved. Attention for landscape was directed to the governor’s home. The area today is designated as a National Historic District and the surrounding properties are beautifully landscaped. Therefore, the City of Morgan’s Point purposely designed the landscaping around the Carriage House to match the existing nuance of the area homes. Additionally, special attention was given to a large pecan tree that is on the property and serves as visual center for the facility. Pavers and irrigation were installed to protect the tree.

The vision and subsequent renovation recue was solely a volunteer effort. The Mayor, Michel Bechtel and city council developed a vision to restore and convert the Carriage House into the new City Hall for Morgan’s Point. The mayor and council members dedicated a great deal of time researching and developing a plan that would effectively house the City Manager, City Secretary, the City’s Police Department and council chambers for regular meetings. Their vision gave the Carriage House a viable reason for the renovation and possibly saved the facility doomed for demolition.

The community of Morgan’s Point recognized early on that if nothing was done to repurpose the Carriage House it would likely continue to deteriorate and be subject to demolition. The result would be the loss of an important architectural feature build by a former Governor of Texas, founder of Humble Oil and Publisher of the Houston Post. Not to mention that its unique design was the creation by the architect that designed the San Jacinto Monument. The grand vision adopted by the community and conceived by Mayor Bechtel and the City Council was to repurpose the property so that the community could enjoy its historical uniqueness. By repurposing the building as a City Hall, it ensured that its place in history would be preserved. Its openair patio design under the historic pecan tree and operational carriage doors will allow an unlimited amount of space for public meetings and gatherings. The City of Morgan’s Point uncharacteristically recognized the importance of providing a landscaping theme that compliments the beautiful lawns and 1920’s landscaping; unique landscaping that features and adorn the beautiful bay front area. Citizens are often seen biking and walking along the bay front and enjoying the pathed walk ways provided by the city. The community venue that the Carriage House provides is the perfect complement for a community that is immensely respectful and protective of the past. Community members enjoy living in an area designated as a National Historic District. Morgan’s Point should be applauded for their foresight and commitment.

05-Stairs After Demo 04-Stairs Before

13-Before With Copper Gutters

16-Windows Before Restoration 17-Windows Being Painted After Conditioned 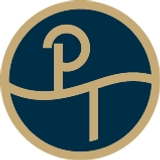