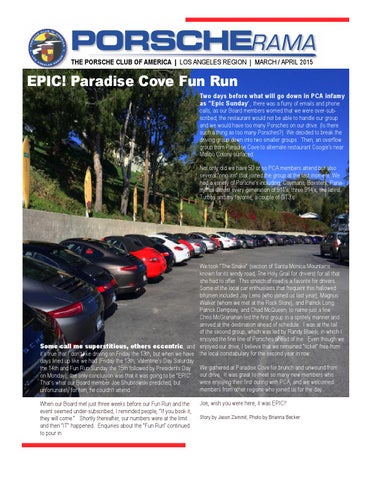 EPIC! Paradise Cove Fun Run Two days before what will go down in PCA infamy as “Epic Sunday ”, there was a flurry of emails and phone calls, as our Board members worried that we were over-subscribed, the restaurant would not be able to handle our group and we would have too many Porsches on our drive. (Is there such a thing as too many Porsches?) We decided to break the driving group down into two smaller groups. Then, an overflow group from Paradise Cove to alternate restaurant Coogie’s near Malibu Colony surfaced.

Not only did we have 50 or so PCA members attend but also several “ring-ins” that joined the group at the last moment. We had a variety of Porsche’s including, Caymans, Boxsters, Panameras almost every generation of 911’s, three 914’s, the latest Turbos and my favorite, a couple of GT3’s.

We took “The Snake” (section of Santa Monica Mountains known for its windy road, The Holy Grail for drivers) for all that she had to offer. This stretch of road is a favorite for drivers. Some of the local car enthusiasts that frequent this hallowed bitumen included Jay Leno (who joined us last year), Magnus Walker (whom we met at the Rock Store), and Patrick Long, Patrick Dempsey, and Chad McQueen, to name just a few. Chris McGranahan led the first group in a spritely manner and arrived at the destination ahead of schedule. I was at the tail of the second group, which was led by Randy Blaesi, in which I enjoyed the fine line of Porsches ahead of me. Even though we Some call me superstitious, others eccentric, and enjoyed our drive, I believe that we remained “ticket” free from it’s true that I don’t like driving on Friday the 13th, but when we have the local constabulary for the second year in row. days lined up like we had (Friday the 13th, Valentine’s Day Saturday the 14th and Fun Run Sunday the 15th followed by Presidents Day We gathered at Paradise Cove for brunch and unwound from on Monday), the only conclusion was that it was going to be “EPIC”. our drive. It was great to meet so many new members who were enjoying their first outing with PCA, and we welcomed That’s what our Board member Joe Shubitowski predicted, but members from other regions who joined us for the day. unfortunately for him, he couldn’t attend. When our Board met just three weeks before our Fun Run and the event seemed under-subscribed, I reminded people, “If you book it, they will come.” Shortly thereafter, our numbers were at the limit... and then “IT” happened. Enquiries about the “Fun Run” continued to pour in.

Joe, wish you were here, it was EPIC!! Story by Jason Zammit; Photo by Brianna Becker

BRING YOUR CAR AND JOIN FELLOW CLUB MEMBERS! 4th Saturday of Every Month! 2

Board of Directors President

Our own PCA-LA Zone 8 Concours will be held at the Santa Monica Museum of Flying on July 12, 2015. This event is one not to be missed.

by David Altemus, President, PCA-LA It’s hard to believe, but this year 2015 Porsche Club of America National will celebrate its 60th Anniversary since its formation in September of 1955. Believe it or not, PCA is the largest non-factorysupported independent single marque sports car club in the world. Our own Region, PCA-LA, will celebrate its 55th Anniversary since its formation in April 1955. As of this writing, PCA-LA has grown to 1,101 primary members and a total of 1,633 members, including affiliate members. Our club’s longevity and growth doesn’t just happen by accident. This comes as a direct result of a dedicated Board of Directors who are all non-paid volunteers who meet each month to plan and organize our events for the membership. This could never occur without the continued participation and enthusiasm of our membership. Thanks to the entire membership and the Board of Directors for creating this great environment of commraderie and fun to enhance the Porsche experience. With the guidance and leadership of Maggie Garnett, we have completely re-designed our website and entered the digital age of social media with postings on Facebook, Twitter and Instagram. Maggie also established a Goodie Store for our region where you can buy PCA-LA shirts, hats, jackets, etc. online. For those members that have not heard, last year Maggie won the coveted “Enthusiast of the Year” Award for Zone 8, which comprises 13 regions located in California, Arizona and Nevada. Congratulations to Maggie! For those members that were not able to attend our Holiday Party last year at the Capital Grill, you missed a great event. Thanks to Marc Bixen of Red Line, our featured guest speaker was Porsche factory race driver Patrick Long. What a wonderful speaker and a real gentleman. Patrick, we all want to thank you for making our event so enjoyable. The California Festival of Speed, a Porsche enthusiasts dream weekend at Fontana Raceway on April 10 – 12 will include Club Racing, Time Trials, Swap Meet, Porsche Corral, Porsche Timeline Display and Concours. The Porsche Parade will take place this year in French Lick Indiana on June 21st – June 27th.

Take a moment to check out our website for upcoming activities and events at www.pcalosangeles.org. Our monthly breakfast meetings are held on the 4th Saturday of each month at the Spitfire Grill at Santa Monica Airport. So come on out and enjoy the fun. Remember, it’s not just the cars, it’s the people.

Welcome to our newly formatted newsletter for 2015! We are looking forward to incorporating all of this year’s exciting events into a new bimonthly newsletter. It will also be available to you electronically via email and on our website. We welcome your feedback, and we encourage you to submit content! Please take lots of photos and/or write about PCA and other Porscherelated events you attend or other items that may be of interest to our membership, and send them to me by email (BriannaBecker@gmail.com) if you would like to see them in print. We also encourage you to connect with us via social media. Our Facebook, Twitter and Instagram accounts are updated with new content daily, and you can find details about our upcoming events on our website. We have a great community of members, and we hope to hear from you! Stay in touch, and hope to see you at an upcoming event! Brianna Becker

In the back was a huge parking lot filled with air-cooled Porsches ranging from early 914’s through later 993’s.

By: Brianna Becker, Vice President, PCA-LA The second Luftgekühlt (air-cooled) classic Porsche event hosted by Patrick Long and Howie Idelson at Bandito Brothers in Culver City on March 1, 2015 was a huge success! There was a breathless excitement in the air as Porsches poured into the driveway and surrounding parking areas, as the main lots filled early. A wispy fog left by overnight rain still hung in the air early that morning, but gently gave way to sunlight and bright blue skies, just in time for the event to begin. Gorgeously kept racecars and other vintage Porsches lined the streets in amazingly well laid out rows according to style and year.

Inside was an awe-inspiring collection of racers, a 904, a 906. Midway through the event, the crowd parted for a white LeMans-winning Kremer 935, which was miraculously driven in and added to the collection of fabulous racing Porsches, as its owner jumped out of the cockpit to great fanfare and applause from the crowd.

The main warehouse style office building was surrounded by “356 Alley”. There were so many Porsches lined up inside and outside of the building, that the display of what seemed like hundreds of cars even rivaled the Porsche Parade in Monterey. The event was extremely well attended, too, by Porsche-admiring hipsters, young and old, and even families with small children in tow. The first Luftgekühlt event was held in November of last year at Deus ex Machina in Venice, spurring a cult following for the air-cooled event. The second one proved to be even bigger. We look forward to the next one! Photos: Brianna Becker

By: Marc Bixen, Technical Director, PCA-LA; Owner, Red Line Service Are you driving a new 991? The 2013 or newer 911? Are you planing on getting one? Well let me fill you in on a small problem that we’ve seen. After an oil change, a small number of cars are showing a low oil level warning. The second gauge from the right is a image screen and can be scrolled to numerous formats, it also gives you pertinent information from your vehicle - GPS, nav, etc. On these few cars the oil level sending unit, which has very small intake orifices, will not provide the central information computer with the proper info for as much as two days after the oil change service. This can be very unnerving to the owner of one of these amazing automobiles, but having confidence in your service facility, and the knowledge that you’re not alone, should make you feel better. As for a solution, my contacts at Porsche don’t have a cure yet, and the dealer mechanics are very frustrated. Some dealers are even taking the unusual process of keeping a client’s car for two days, post-service, to be sure that the client has no issues. So if your shop returns the car with a low oil warning and tells you, “Your car’s fine; it’ll show correct tomorrow or the day after,” and your oil pressure gauge is reading correctly, believe them. If your shop is confident, then you should be. If you’re uncomfortable, plan on leaving your car with the service facility for a couple of days. Happy motoring!

Porsche 911 GT3 RS: for High Performance Drivers ATLANTA, March 3, 2015 /PRNewswire/ The new Porsche 911 GT3 RS breaks down the barrier between road-going sports cars and race cars. It is equipped with the maximum amount of motorsport technology that is currently possible in a street-legal 911 suitable for everyday driving. Extensive modifications to its drivetrain, aerodynamics, and lightweight design take performance to an even higher level than the 911 GT3. With a Nuerburgring Nordschleife lap time of seven minutes and 20 seconds, the new 911 GT3 RS surpasses the 911 GT3 by five seconds, making it the fastest current generation 911 on the famous German racetrack. The 911 GT3 RS is powered by a four-liter six-cylinder engine developing 500 hp and 338 lb.-ft. of torque, combined with a specially developed PDK transmission. The engine has the largest displacement and most power of any naturally aspirated engine with direct fuel injection in the 911 family, accelerating the high-performance sports car from zero to 60 miles per hour in 3.1 seconds and propelling it through the quarter mile on the track in 11.2 seconds. It can be ordered now for a US launch in July 2015.

Revised Bylaws to be Submitted to Members for Approval By: Chris McGranahan, Treasurer, PCA-LA

Mid-20th Century Porsches, fashion and architecture may be cool, but when it comes to our PCA-LA Bylaws, they need to get with the times. Our Bylaws need to be updated. So, several of your board members are working to revise our Bylaws. The goal is to reflect a number of changes, not only in the world, but the way we now operate as a club. An example is that we have elections in the old Bylaws under a complex system of mailing and a mandated system of counting ballots. Today that can all be done much more efficiently by electronic methods. Also, there are board positions that are outdated, and other functions that need to be recognized as board positions. Also, a new process for creating a board of directors that is composed of both elected and appointed members should be a part of the new Bylaws. Later on this year, look for a draft of new Bylaws for our region, along with an explanation of the reasoning behind the changes. Once the draft has been circulated and comments received, the membership will be asked to approve new Bylaws for the Region. 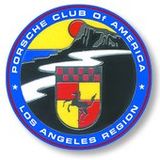