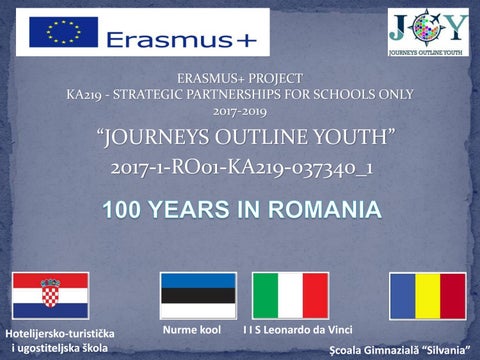  The coat of arms of Romania has as

its central symbol a crowned golden eagle, framed in a large blue shield, holding an Orthodox cross in its beak, in the right claw having a sword, and on the left a scepter. The eagle&#39;s chest features another shield, divided into five neighborhoods, symbolizing the five Romanian provinces:Țara Românească, Moldova, Transilvania, Banatul, Oltenia și Dobrogea.

Among the first traces of cave dwelling appear in the Middle Paleolithic, what is called Musterian culture, found in all regions of the country, but especially in the caves of the Southern Carpathians: Muierilor, Cioclovina, Ohaba Ponor. A series of stone tools the carvings discovered in these places were dated as having a 50 millennia (year-old age).

The appearance of the ceramics left traces in the Carpatho-Danubian space. The oldest clay pots burned out of the Romanian space date back to 6000 BC.

The thinker from Hamangia and her wife, a 8000-year-old

Between the 1st Century BC and II AD, there was the Dacian state in the area bounded by the Danube, the Black Sea and the Carpathian Mountains. The maximum point of development was reached in the time of King Burebista (82-44 BC) Burebista, established the capital of the Geto-Dacian Kingdom in the Orastie Mountains, in Sarmisegetuza.

A new period of flowering of Dacia takes place under the leadership of Decebal (87-106 AD). There are several confrontations between the armies of the Roman Empire and those of Decebal, the best known being Tapae. The Roman Empire managed to defeat the Geto-Dacians, and after conquest, the Dacian state became a Roman province. Two commemorative monuments bear witness to the DacianRoman battles: Trajan&#39;s Column in Rome and Tropaeum Traiani in Adamclisi.

is the moment when a new people, the Romanian people, the result of the merging of the Dacian natives, the first basic ethnic element and the Roman population formed of the colonists of the empire, began to crystallize, and the language spoken by this new people , Romanian language.

The union of Bukovina with Romania was the political act of the Bukovinian Romanians by which they decided to join Bukovina to the motherland, Romania.

Alba Iulia had been chosen by the Central Romanian National Council to house the representatives of the Romanian people in Transylvania on the largest day in the history of this people for two reasons. ď&amp;#x201A;&amp;#x2014;

The union of Transylvania with Romania ends the process of building the Romanian unitary national state, a process started in 1859, through the union of Moldavia with Wallachia, continued by the union of Dobrogea in 1878, of Bessarabia in March 1918 and of Bukovina in November 1918.

important public holidays in Romania. The Orthodox Easter celebrates the Resurrection of Jesus, and that makes it one of the most important and beautiful Christian customs. In 2018, the Easter Day in Romania is celebrated on April 8th. This national holiday it is filled with customs and traditions.

 One of the most important traditions is egg dying.The

painted eggs are always present on the table during the holiday, and kids can hardly wait to participate in the egg tapping competitions. The traditions say that people who knock eggs on the first day of Easter will see each other after death. The first person who taps the egg has to say “Christ has resurrected” (in Romanian, ‘Cristos a înviat’), while the second one goes “Indeed, he has resurrected” (in Romanian, ‘Adevarat a înviat’)

 Another important “item” that revolves the easter

traditions are the easter foods. The main star of the dishes is lamb meat, which is served together with side dishes such as potatoes or prepared in traditional dishes such as drob. Something that shouldn’t be missing from the Easter table is the large variety of Easter bread and cakes,known in Romania as “pască”.

traditions is the Holy Light. On the Easter night, Romanian people go to their local church to light a candle and bring it into their home. That flame symbolizes the Resurrection of Christ and the triumph of good over evil.

represents the Birth of Jesus. Christmas is not just a Religious Holiday, it is also an occasion to meet loved persons and share with them gifts and to wait for Santa Clause. In Christmasâ&amp;#x20AC;&amp;#x2122;s Eve, many children are going to carol, to be rewarded with many kinds of traditional cakes.

 A really known custom in Romania is “Cutting the pig”.

In some parts of the country, the pig is cut on 20 December because it is said that the pig that is not cut on this day is not fatter because he has already saw his knife. Every kind of family needs to cut the pig for Christmas.

to decorate the Christmas Tree in the evening of 24 December, Christmasâ&amp;#x20AC;&amp;#x2122;s Eve, to be able to be with the family. The tree is decorated with fairy lights, candles, angels, bubbles, even with candies.

&quot;The European Commission support for the production of this publication does not constitute an endorsement of the contents which reflects the views only of the authors, and the commission cannot be held responsi-ble for any use which may be made of the information contained therein.&quot;