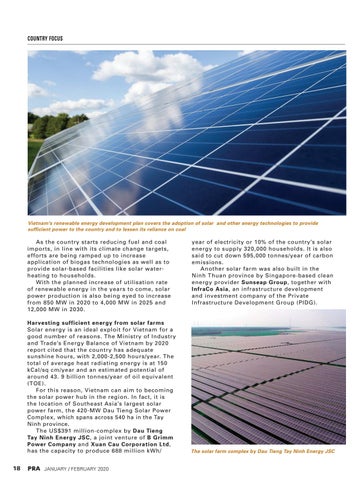 Vietnam&#39;s renewable energy development plan covers the adoption of solar and other energy technologies to provide sufficient power to the country and to lessen its reliance on coal

As the country starts reducing fuel and coal imports, in line with its climate change targets, efforts are being ramped up to increase application of biogas technologies as well as to provide solar-based facilities like solar waterheating to households. With the planned increase of utilisation rate of renewable energy in the years to come, solar power production is also being eyed to increase from 850 MW in 2020 to 4,000 MW in 2025 and 12,000 MW in 2030. Harvesting sufficient energy from solar farms Solar energy is an ideal exploit for Vietnam for a good number of reasons. The Ministry of Industry and Trade’s Energy Balance of Vietnam by 2020 report cited that the country has adequate sunshine hours, with 2,000-2,500 hours/year. The total of average heat radiating energy is at 150 kCal/sq cm/year and an estimated potential of around 43. 9 billion tonnes/year of oil equivalent (TOE). For this reason, Vietnam can aim to becoming the solar power hub in the region. In fact, it is the location of Southeast Asia’s largest solar power farm, the 420-MW Dau Tieng Solar Power Complex, which spans across 540 ha in the Tay Ninh province. The US$391 million-complex by Dau Tieng Tay Ninh Energy JSC, a joint venture of B Grimm Power Company and Xuan Cau Corporation Ltd, has the capacity to produce 688 million kWh/

year of electricity or 10% of the country’s solar energy to supply 320,000 households. It is also said to cut down 595,000 tonnes/year of carbon emissions. Another solar farm was also built in the Ninh Thuan province by Singapore-based clean energy provider Sunseap Group, together with InfraCo Asia, an infrastructure development and investment company of the Private Infrastructure Development Group (PIDG). 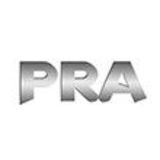