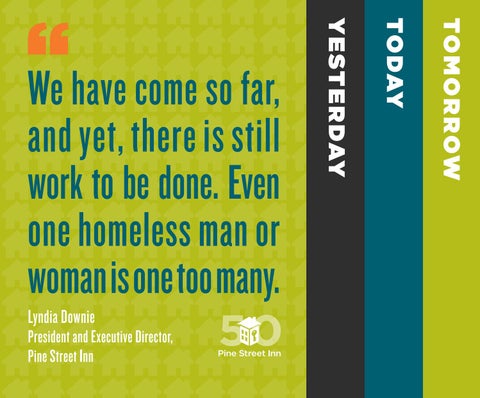 William grew up in the Boston area and served in both the U.S. Navy and the Merchant Marines. He worked in construction and the food industry while living in his family home. When his father died several years ago, the family became embroiled in a major dispute over his father’s estate. Coping with his father’s death was overwhelming.

As a result of the turmoil, William wound up homeless. “I would say to people, ‘do unto others as you would want them to do unto you.’ Most homeless people are not looking for a handout. Each person is different and needs understanding and opportunity.”

Much has changed over the years as we become increasingly focused on providing housing and support services. However, one thing has remained constant—our commitment to treating every individual we encounter with dignity and respect.

As Pine Street Inn marks its 50th year in Boston, we look back on our humble beginnings, our progress through the years and our vision for the future: a city without homelessness.

1970s Pine Street Inn opened as a nightly refuge for 200 men struggling with alcoholism. Many more people ended up on the streets when mental health patients were deinstitutionalized.

1980s In 1980, with a need for a larger space, Pine Street moved to the “tower” building in the South End, where it also opened a women’s shelter.

Yesterday: 50 Years Ago The late 1960s were a time of economic and political upheaval in many cities across the United States. Boston was no exception. Boston was no exception, with a growing homeless population. A group of activist priests known as the Association of Boston Urban Priests stepped up, formalizing a previously loosely-organized resource center located on Pine Street in Chinatown. James Buckley, followed by Paul Sullivan, was the first to lead the new organization. They were able to supply ‘a hot and a cot’—a meal and a bed for the night—but not much else. Despite the stark surroundings, Paul Sullivan treated the men who showed up at the door each night with dignity and respect, which became the hallmark of the new organization.

BEYOND SHELTER: HOUSING IS THE SOLUTION As we enter the 21st century, Pine Street commits itself to the strategic vision of a â&#x20AC;&#x153;home and community for everyone,â&#x20AC;? continuing to open permanent housing in Boston and Brookline. All residences offer on-site support staff who connect tenants with medical and mental health care, job training and employment.

Pine Street launched workforce development programs in the food services and hospitality industries, and continued to focus on creating housing.

Pine Street began to focus on permanent supportive housing, which continued into the new century.

Today: Continued Commitment to Housing Over the past 50 years, Pine Street Inn has evolved from a single building on Pine Street in Chinatown for 200 men to an organization with four shelters and 35 permanent housing locations, supporting close to 2,000 men and women every day. Our goal is to support individuals moving off the streets and out of shelter into permanent homes. On-site staff help tenants reconnect with the community, ensuring their long-term stability and success. The journey is different for every individual, but through innovative and time-tested programs, coordinated with citywide efforts, Pine Street guides individuals on a pathway toward greater independence.

HAMILTON HOUSE Pine Street Inn recently opened Hamilton House in Dorchester. A long-vacant warehouse was transformed into a brand new 52-unit building for Pine Street tenants. Hamilton House was constructed with aging residents in mind. Key elements of the design were the inclusion of an elevator and other amenities so residents are able to â&#x20AC;&#x153;age in place.â&#x20AC;?

retention rate after one year in Pine Street housing

Pine Street owns and operates nearly 850 units of permanent supportive housing. Our housing includes an array of services to ensure that tenants succeed in their path from homelessness to a home. Drawing on decades of experience, we adapt our housing support for each individual, leading to a high housing retention rate.

Supportive housing ends the cycle of homelessness and provides the services necessary to address unmet health needs. Research published by the Blue Cross Blue Shield of Massachusetts Foundation, with Pine Street Inn as a partner, estimates savings of more than $11,000 per person/per year in public healthcare costs after individuals move off the streets and into supportive housing.

Bostonâ&#x20AC;&#x2122;s rate of unsheltered homelessness is now under three percent. Pine Street Innâ&#x20AC;&#x2122;s focus on housing placements and innovative programming contribute to reduced dependence on shelters. Our outreach and triage teams work with people on the street to provide shelter, housing and support.

Tomorrow: Create. Maintain. Sustain. We know the solution to homelessness: a home. As rents continue to rise and vacancies are at an all-time low, Pine Street is redoubling efforts to identify and create options for those struggling to move off the streets, out of shelter and into a home. To mark our 50th anniversary, a $50 million “Key Moments” campaign is underway to fuel Pine Street’s plans for the future. With a goal to create, maintain and sustain our housing, we are partnering with Boston Mayor Marty Walsh and the City of Boston on the Boston’s Way Home Fund to create 200 new units of housing, bringing our total to 1,000+ units. We will also create a permanent fund to provide support for the housing program long into the future.

PLANNING FOR THE FUTURE Pine Street recently received approval from the Boston Planning & Development Agency (BPDA) to build new housing at 3368 Washington Street in Jamaica Plain, the most significant project of its kind in Boston. This building will replace the existing Pine Street warehouse/office building and create 140 housing units with support services for individuals moving out of homelessness, along with offices and an additional 62 units of income-restricted housing for families, to be managed by The Community Builders.

The future of Pine Street Inn PROGRAMS: More than a Bed A bed for the night is only the beginning. Our role extends beyond shelter to an array of proven, innovative solutions, designed to make housing possible for everyone.

HOUSING CREATION: A Permanent Address Supportive housing is the best and most cost-effective path to independence and stability for those with the longest and most challenging histories with homelessness.

SUSTAINABILITY: Lasting Impact Housing for our guests is an irreplaceable and renewable resource in the fight against homelessness. Pine Street Inn is focused on ensuring the sustainability of our housing by creating new solutions to housing challenges.

Years ago, I came to New York from Jamaica. When my niece had her second child in 2013, I moved to Boston to help while her husband worked. Then I had medical issues and surgery, and became homeless about two years ago. Now I’m about to get housing and I feel elated. I have the placement letter and I called my niece. I said a prayer and thanked God. I cannot say enough good things about Pine Street. Homelessness can happen to anyone. Don’t give up. Think positive and you will get out.”

I’m originally from the Boston area. I’ve always worked, for places like JetBlue and Massachusetts General Hospital, and also have a B.A. in Culinary Arts from Johnson and Wales University. I had an apartment in East Boston, but there were rent hikes and I couldn’t afford the place any longer. I moved in with family and did everything I could so I wouldn’t have to come to a homeless shelter. But then I became homeless, and I can’t afford market rent. I also have stage 3 abdominal cancer, and the chemo treatments have been tough and complicated. I’ve applied for all kinds of housing, but it’s a waiting game. I’m trying to stay positive and hope to get something soon.”

OUR IMPACT ON THE COMMUNITY

We need to stay the course if we are to put homelessness behind us. Lyndia Downie, President and Executive Director Pine Street Inn

Nearly 2,000 men and women supported each day 78% male / 21% female / 1% gender non-conforming 75% over 35 years old / 50% over 55 years old 74% with one or more disabling conditions 850 in permanent supportive housing 35 housing locations and 4 shelters, including one for women 96% retention rate after one year in housing 1,416 moved from homelessness into a variety of housing options within the past year 56% housing beds / 44% emergency shelter beds 670 emergency shelter beds 65+ visited daily by outreach team Under 3% street homelessness 500 veterans annually in dedicated veteransâ&#x20AC;&#x2122; housing and in shelter 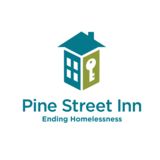 As Pine Street Inn marks 50 years in Boston, we look back on our humble beginnings, our progress through the years and our vision for the fu...

As Pine Street Inn marks 50 years in Boston, we look back on our humble beginnings, our progress through the years and our vision for the fu...