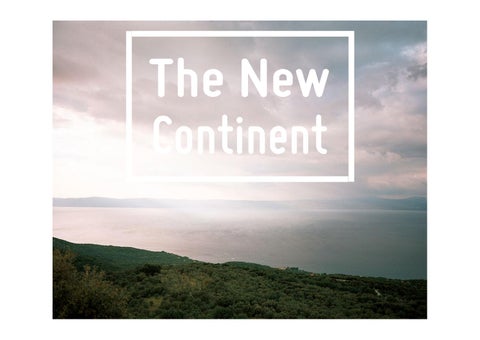 â&amp;#x20AC;&amp;#x153;It takes so little, so infinitely little, for someone to find himself on the other side of the border, where everything - love, convictions, faith, history - no longer has meaning. The whole mystery of human life resides on the fact that it is spent in the immediate proximity of, and even in direct contact with, that border, that it is separated from it not by kilometres but by barely a millimetre.â&amp;#x20AC;?

The New Continent is a slow journalism, long term project and collaborative platform with the aim to document the stories of people living within or outside Europeâ&amp;#x20AC;&amp;#x2122;s Schengen borders.

Cadets on graduation day near the Baltic Sea in Kaliningrad Oblast. Russia.

The Schengen Agreement was signed on June 14th 1985, brought about to govern the free movement of people within Europe’s borders. On the day of Schengen’s thirtieth birthday, the documentary project New Continent begins a twomonth circumnavigation of Europe and the Schengen Zone. The project sets out to tell the stories at Schengen’s frontiers; of people who move inside its borders and of people still outside of them. Quite apart from the date itself, the timing holds significance. A century since World War I defined the nations through which the project will travel, the European Union has in ways become victim of its own success, shepherding - in a period of tranquilty long and stable enough for peace to be taken for granted and for integration to become perceived as a problem rather than a goal. These sentiments have made their way steadily to the ballot box, as young Greeks voted for Golden Dawn and British pensioners the UK Independence Party. What changed so profoundly as to normalise ideas and language that would very recently have been considered extreme ? What is to be done with those people who are isolated by hasty definitions of national values and identity and does isolation create a cycle of extremism where each vicious thought, word or action precipitates the next? Certainly the mixing of Europe’s cultures has been no more pronounced than the ideas that have sprung up to describe and prophesise its consequences. Some claim immigration is threatening European culture while others feel it is strengthening and enhancing that culture. Still others feel its presence and effects are overstated to begin with. Statistics can be relied upon to support any contention and the sides people take are often as distinct from one another as the borders either side of Schengen. Supporters of immigration claim incoming migrant workers were good for the economy while denying their arrival have any effects on wages. Opponents of migrations claim supporters of migration were only supporters at all because they had not witnessed the effects of the trend they supported. Despite this hot contention, evidence suggests those in areas of high-immigration tend (perhaps unsurprisingly) to be most often in favour of immigration. A final irony is that the name of a small town in Luxembourg, and the treaty that takes its name from it, is unknown to most who argue about its effects. New Continent is a response in words and pictures to boundaries that represent Schengen, some of the differences it hosts and the questions that arise. The project is an attempt to recognise the genuine difficulties of complex human geographies, while also acknowledging that borders can obstruct much that is good in the spirit of a modern Europe.

Iron Curtain crossing between the former DDR and GDR border at Hรถtenslebenat.Today the circus is in town.Middle Saxony, Germany.

Phil Le Gal is a French documentary photographer, based in London, UK. He specialises in photo documentary, reportage and portraiture. Much of his practice stems from his interests in contemporary social, environmental and globalization issues. Each story is a window on a facet of this fascinating yet contradictory planet.

His work has been displayed in several exhibitions in the UK and published on the BBC, British Journal of Photography, Metro. Phil founded The New Continent project in 2014.

He is passionate about stories, travels, revealing how others live and oddities of this world. After training in photography at London Central Saint Martinâ&amp;#x20AC;&amp;#x2122;s College of Arts he has completed a Master in Photojournalism and Documentary Photography with Merits at the London College of Communication, University of the Arts London. He works on long-term, self-initiated and http://phillegal.org researched projects and has completed W: hi@phillegal.org work in China, Democratic Peopleâ&amp;#x20AC;&amp;#x2122;s E: +44 (0) 7 956 627 956 Republic of Korea (North Korea), former Tel: Soviet countries, Nigeria, UK, France.

Véronique Saunier established her reputation as a writer soon after moving to Hong Kong in 1992. As a freelance writer she has been covering various industries from new technologies to textile and fashion and is recognized as an accomplished and knowledgeable writer.

Veronique has joined The New Continent project in 2016 and traveled from Turkey, through Greece and FYROM Macedonia. In a short timeframe she published 6 articles in various online magazines to illustrate the post EU-Turkey deal signed in March 2016.

Celeste Cantor-Stephens is a sound artist, musicologist, linguist and activist. Her interests typically focus on sociopolitical aspects of musical practice, and on music’s role in individual and community wellbeing.

For her main project, the MSt thesis, she discussed the use of music as a personal tool for wellbeing and emotional survival during challenging experiences of migration. This was based on research conducted in refugee camps and squats in Calais.

Born in Gloucestershire, and growing up in South-West Wales, Celeste has more recently lived in both the UK and France. Despite nomadic tenancies, she is currently based in Bristol. In 2011 she graduated with a BA in French and Music from the University of Sheffield, and in 2014/15 went back to school to complete an MSt in Musicology at Oxford University. During this time she wrote on the ethical issues of ethnomusicological fieldrecording, the neuropsychology of music W: and ‘self’, and the sociopolitical attributes E: of ska and reggae.

Refugees, mostly from the Syrian Arab Republic, are waiting for a night train at the border with Serbia to take them north towards Hungary, Slanishte, FYROM Macedonia.

The New Continent - Part I

The provisional itinerary will begin from the city of Calais and stories of migrants trying to reach the UK, through France and the landscape of World Wars up to the village of Schengen in Luxembourg. The old route of the Iron Curtain will lead to Berlin and then on to Kaliningrad, a Russian enclave within the Schengen space, up to the Baltic States and the city of Vilnius. Kiev and Maidan square in Ukraine will be visited before heading to Romania and Bulgaria; new EU member states along the Black Sea. The Turkish-Greece border offers another frontier as well as a well-known route for trafficking people. The return West will pass through the Balkans, via Macedonia, Kosovo, Serbia and the newest EU member, Croatia. One of the southernmost parts of the Schengen space will be visited on the Italian island of Lampedusa – the destination of many North African migrants aiming to reach Schengen. The final leg of the journey will be up through Italy to Perpignan, France, where the documentary project will be presented at the Visa pour l’Image Photojournalism Festival. An estimate of the total distance travelled is approximately 8,000 miles (10,000kms). To ensure exposure to local places and populations, all travel will be done overland. This will include journeys by car, train, local public transport and in some cases, by bicycle. • • • • • • • • • • •

Refugee camp in Idomeni near the Greek border with the FYROM Macedonia. Northern Greece.

The final output of New Continent will be a website, video and book. The website will host a web documentary and provide a social media point of reference for submitting stories from the project. The website is already on line at http://thenewcontinent.eu. Blog updates, Instagram photographs and other documentation will be posted during the itinerary, maintaining contact with partners, funders and a community as the project develops. A book of monographs will be printed at the end of the project and sold from the website. A video will also be published and will made available on a pay per view basis. An exhibition in London will provide a focal point for The New Continent and the release of the final works; this will also be an opportunity for partners to meet, celebrate their involvement with the project and share ideas resulting from its completion.

Publications, Awards &amp; Partners The series of portraits of refugees “Faces of The Jungle“ I shot in Calais has been selected as a “Coup de coeur/favorite” for the ANI (Associaton Nationale des Iconographes) at Perpignan 2015.

The New Continent project has been shortlisted for the Session #5 of the Prix Mentor 2016 by Association FreeLens during Perpignan’s Visa pour l’Image 2016.

A proportion of funding is already in place and ensures the project will go ahead as planned. We are also seeking funds and private investors to support it. Meanwhile,discussions with galleries, publishers, educational institutions and magazines are ongoing to develop the network of partners that will help deliver and then promote New Continent to the widest possible audience. For details of the budget, to enquire about support and sponsorship opportunities, or to fund a specific cost within the project, please contact: hi@theNewContinent.eu or visit http://www.thenewcontinent.eu/donate/ +44 (0) 7 956 627 956