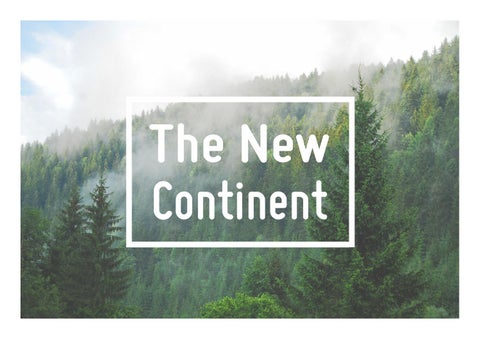 â&amp;#x20AC;&amp;#x153;It takes so little, so infinitely little, for someone to find himself on the other side of the border, where everything love, convictions, faith, history - no longer has meaning. The whole mystery of human life resides on the fact that it is spent in the immediate proximity of, and even in direct contact with, that border, that it is separated from it not by kilometres but by barely a millimetre.â&amp;#x20AC;?

The Schengen Agreement was signed on June 14th 1985, brought about to govern the free movement of people within Europe’s borders. On the day of Schengen’s thirtieth birthday, the documentary project New Continent begins a two-month circumnavigation of Europe and the Schengen Zone. The project sets out to tell the stories at Schengen’s frontiers; of people who move inside its borders and of people still outside of them. The New Continent is a response in words and pictures to boundaries that represent Schengen, some of the differences it hosts and the questions that arise. The project is an attempt to recognise the genuine difficulties of complex human geographies, while also acknowledging that borders can obstruct much that is good in the spirit of a modern Europe.

The New continent project started in Calais because of the importance of its role within the Schengen space. It is one of the entry or exit points out/into the single space. It is also the closest point and shortest distance between the Schengen area (France) and the UK (non-Schengen). Many of the identified migratory routes for migrants wishing to reach the UK (from Turkey / From the Mediterranean sea, from the Balkans) lead to the city of Calais. As such the location of the French city constitutes a bottleneck for the incoming flow of refugees. It is certain that when the Schengen agreement was signed thirty years ago in the small town of Schengen, Luxembourg, the municipality of Calais wasnâ&amp;#x20AC;&amp;#x2122;t even suspecting it will become at the forefront of the European migrations issues of the 21st century.

Kaliningrad is a geographical curiosity of the European Continent. It is the capital of the Russian province (Oblast) of the same name, sandwiched between Poland and Lithuania along the Baltic Coast. It is a federal subject of Russia , on the Baltic coast, an exclave, with no land connection to the rest of Russia. When the soviet Union broke apart in the in the late 1980â&amp;#x20AC;&amp;#x2122;s the exclave found itself cut from the mainland Russia. The neighbouring countries Poland and Lithuania joined the European Union in the spring of 2004. They also both became member countries of the Schengen Agreement on 21 December 2007. Kaliningrad found itself left outside of the continental European Schengen space.

On 5th March 1946 Churchill gave a speech in Missouri to a crowd of 40,000 and made history by using the words “Iron Curtain”. In this speech, Churchill gave the very descriptive phrase that surprised the United States and Britain by saying “From Stettin in the Baltic to Trieste in the Adriatic, an iron curtain has descended across the Continent.” As part of documenting European borders the project also looked into previous europeans boundaries and went along the previous so-called “German German border”, known in German as Grenze from Hof in Bavaria to Berlin.

The Republic of Cyprus has always been a strategic place for Europe, being the gateway to the Middle East. Occupied in the northen part since 1974 by Turkey the country is a candidate to join the European Schengen space. Many questions needs to be answered before Cyprus could join the single space including the future of its border with the occupied northern territory.

Romania and its southern neighbour, Bulgaria, had hoped to join the borderless zone back in 2010. With the accession of Romania and Bulgaria to the Schengen space the Black Sea could become the new Schengen eastern most frontier and open a new maritime border.

Chapter VI - Fortress Europe On the footsteps of migrants and refugees, overland from Athens to Budapest

In August 2015 the New Continent project set off from Athens in Greece to document the plights of the refugees making their way up through the Balkans to reach Budapest in Hungary. I documented the struggle of refugees trying to cross borders by any means.I followed the same migratory routes used by the refugees to reach Hungary the first country in the European Union and the Schengen space. Weeks later Europe discovered the extent of the refugee crisis happening on its doorstep...

The New Continent is an answer in words and pictures to Europe's border-less Shengen space, the people living within and the people still outside. http://TheNewContinent.eu