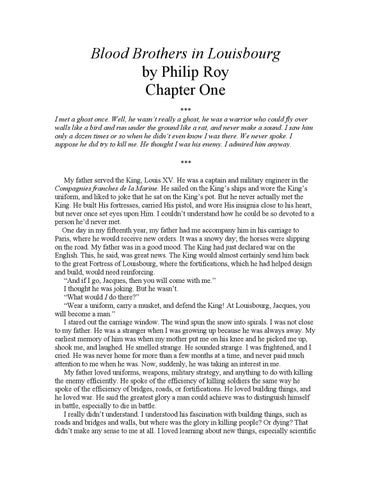 Blood Brothers in Louisbourg by Philip Roy Chapter One *** I met a ghost once. Well, he wasn’t really a ghost, he was a warrior who could fly over walls like a bird and run under the ground like a rat, and never make a sound. I saw him only a dozen times or so when he didn’t even know I was there. We never spoke. I suppose he did try to kill me. He thought I was his enemy. I admired him anyway. *** My father served the King, Louis XV. He was a captain and military engineer in the Compagnies franches de la Marine. He sailed on the King’s ships and wore the King’s uniform, and liked to joke that he sat on the King’s pot. But he never actually met the King. He built His fortresses, carried His pistol, and wore His insignia close to his heart, but never once set eyes upon Him. I couldn’t understand how he could be so devoted to a person he’d never met. One day in my fifteenth year, my father had me accompany him in his carriage to Paris, where he would receive new orders. It was a snowy day; the horses were slipping on the road. My father was in a good mood. The King had just declared war on the English. This, he said, was great news. The King would almost certainly send him back to the great Fortress of Louisbourg, where the fortifications, which he had helped design and build, would need reinforcing. “And if I go, Jacques, then you will come with me.” I thought he was joking. But he wasn’t. “What would I do there?” “Wear a uniform, carry a musket, and defend the King! At Louisbourg, Jacques, you will become a man.” I stared out the carriage window. The wind spun the snow into spirals. I was not close to my father. He was a stranger when I was growing up because he was always away. My earliest memory of him was when my mother put me on his knee and he picked me up, shook me, and laughed. He smelled strange. He sounded strange. I was frightened, and I cried. He was never home for more than a few months at a time, and never paid much attention to me when he was. Now, suddenly, he was taking an interest in me. My father loved uniforms, weapons, military strategy, and anything to do with killing the enemy efficiently. He spoke of the efficiency of killing soldiers the same way he spoke of the efficiency of bridges, roads, or fortifications. He loved building things, and he loved war. He said the greatest glory a man could achieve was to distinguish himself in battle, especially to die in battle. I really didn’t understand. I understood his fascination with building things, such as roads and bridges and walls, but where was the glory in killing people? Or dying? That didn’t make any sense to me at all. I loved learning about new things, especially scientific

inventions such as the diving bell, the steam engine and the pianoforte, and music and books. Weapons were interesting too—how they were constructed and how they worked—but it bothered me that they were used to kill people. When I was little, I saw a man crushed beneath a carriage. He fell down in the street, and the wheels rolled over him and killed him. I learned then that the body was not made to stand up to wood and metal. Even the strongest man’s body could be broken with a block of wood. When I thought of people creating mechanical inventions to rip apart the flesh and bones of other people, I felt horrified inside. But that was a secret I kept to myself. I didn’t want anyone to think I was afraid. At fifteen, I had already exceeded my father’s expectations for education. No one needed that much book learning, he said. Now was the time to concentrate on the manly arts: swordsmanship, wrestling, and musketry. I shut my eyes when he said that. I hated wrestling, was hopeless with a sword, and couldn’t fire a musket to save my life. Other boys my age had fathers or older brothers around to show them those things. I didn’t. Not to worry, said my father. There was still time to learn. At Louisbourg, I would learn everything I needed to know to become a man. As the carriage entered the city gates, I made an attempt to discuss Voltaire, my favourite writer, in the hope of showing my father that my talents lay elsewhere. Voltaire was a visionary. He wanted to make things better for France, not just for the King. The future was in the brandishing of new ideas, not swords and muskets. “Voltaire has a new way of…” “Voltaire?! Voltaire is a criminal!” my father shouted. “That is why he was thrown in the Bastille. He wrote against the King. He should have been shot for that! No, you need to study the manly arts now, Jacques. You have read enough books.” I felt desperate. “Will I be able to bring my violincello?” He smiled, but it wasn’t genuine. “Sure. Why not? Bring anything you like, though I doubt you will feel much like playing it there. The Fortress of Louisbourg is the greatest defence system in the New World, Jacques. Just wait until you see it. You will be so impressed. And with all our military preparations, I think you will find little time for music.” As the snow thickened on the branches outside, I tried to imagine raising a heavy musket to my shoulder, aiming and firing at an enemy soldier. He would have a look of horror on his face. He would fall to his knees, drop forward onto the ground, and his blood would drip into the soil. Then, someone else would shoot me, and I would fall. I would bleed to death, too. I hadn’t even reached my sixteenth birthday. Would my father see glory in that? That was insane. War was insane. All the great philosophers had said so. But my father hadn’t read them. As for the New World, why should I care about a place so far away? Wasn’t it just filled with savages? I wouldn’t go. And if my father forced me to, I would hate him forever. *** My mother was upset at the thought of losing me, but would not go against my father’s wishes. I could see it in her eyes, behind her tears. I didn’t blame her for that. That was the way of our society. We sat down for tea the next morning. “I will bring my violincello, Mama,” I said. She looked troubled.

“What? What is it?” “Jacques, your father has decided your violincello will stay behind” “No, no. He clearly said I could bring it.” She shook her head. “I don’t think he meant it.” My mind raced. I thought of running away. I had cousins in Provence. But they would not take me in if I went against my father’s will. “Are you sure, Mama? He clearly said I could take whatever I liked.” “I believe he will tell you there is space for one chest only. Can you fit your violincello in one chest?” “Perhaps, if I remove the neck and bridge. And I pack my things around it.” “Jacques…” She took my hands. “Your father has it firmly in his mind you will come back from the New World a grown man. That you will join him in the Compagnies franches de la Marine.” “And build fortresses?” “Yes.” I shook my head. “Mama, I will write to you every day and make certain the letters are sent with each sailing ship.” “My mother’s tears fell hard. How I hated to see her cry. “I know, my son. I will write you, as well.” She forced herself to smile. “And perhaps you will find the pendant I gave to your father on his last voyage there. It is a turquoise oval cut with a woman’s face. Look, it matches this ring. See how lovely it is? My grandmother gave it to me when I was a little girl. It was my favourite possession.” “If it is there, Mama, I will find it.” *** I packed my violincello. I took it secretly to the instrument maker’s, where they separated the neck from the body, and gave me glue for reattaching it. I wrapped my clothes around it, and just managed to squeeze the body inside the chest. I wrapped the neck, bridge and bow, rolled up the strings, and packed them all separately. This left little space for anything else, so I chose my books carefully, and took only what clothing I couldn’t live without. I was hardly expecting to frequent high society in the rustic Fortress of Louisbourg.