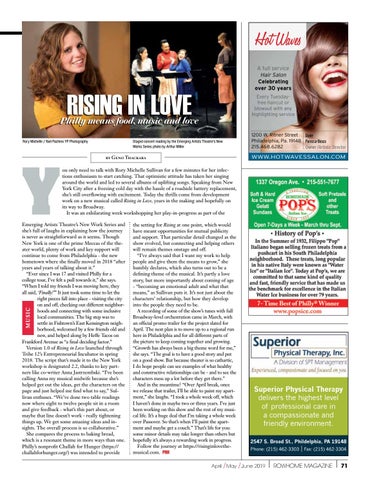 by Geno Thackara ou only need to talk with Rory Michelle Sullivan for a few minutes for her infectious enthusiasm to start catching. That optimistic attitude has taken her singing around the world and led to several albums of uplifting songs. Speaking from New York City after a freezing cold day with the hassle of a roadside battery replacement, she’s still overflowing with excitement. Today the thrills come from development work on a new musical called Rising in Love, years in the making and hopefully on its way to Broadway. It was an exhilarating week workshopping her play-in-progress as part of the

Emerging Artists Theatre’s New Work Series and she’s full of laughs in explaining how the journey is never as straightforward as it seems. Though New York is one of the prime Meccas of the theater world, plenty of work and key support will continue to come from Philadelphia - the new hometown where she finally moved in 2018 “after years and years of talking about it.” “Ever since I was 17 and visited Philly for a college tour, I’ve felt a pull towards it,” she says. “When I told my friends I was moving here, they all said, ‘Finally!’” It just took some time to let the right pieces fall into place - visiting the city on and off, checking out different neighborhoods and connecting with some inclusive local communities. The big step was to settle in Fishtown’s East Kensington neighborhood, welcomed by a few friends old and new, and helped along by Heffe Tacos on Frankford Avenue as “a final deciding factor.” Version 1.0 of Rising in Love launched through Tribe 12’s Entrepreneurial Incubator in spring 2018. The script that’s made it to the New York workshop is designated 2.2, thanks to key partners like co-writer Anna Jastrzembski. “I’ve been calling Anna my musical midwife because she’s helped get out the ideas, get the characters on the page and just helped me find what to say,” Sullivan enthuses. “We’ve done two table readings now where eight to twelve people sit in a room and give feedback - what’s this part about, or maybe that line doesn’t work - really tightening things up. We get some amazing ideas and insights. The overall process is so collaborative.” She compares the process to baking bread, which is a resonant theme in more ways than one. Philly’s nonprofit Challah for Hunger (https:// challahforhunger.org/) was intended to provide

the setting for Rising at one point, which would have meant opportunities for mutual publicity and support. That particular detail changed as the show evolved, but connecting and helping others will remain themes onstage and off. “I’ve always said that I want my work to help people and give them the means to grow,” she humbly declares, which also turns out to be a defining theme of the musical. It’s partly a love story, but more importantly about coming of age - “becoming an emotional adult and what that means,” as Sullivan puts it. It’s not just about the characters’ relationship, but how they develop into the people they need to be. A recording of some of the show’s tunes with full Broadway-level orchestration came in March, with an official promo trailer for the project slated for April. The next plan is to move up to a regional run here in Philadelphia and for all different parts of the picture to keep coming together and growing. “Growth has always been a big theme word for me,” she says. “The goal is to have a good story and put on a good show. But because theater is so cathartic, I do hope people can see examples of what healthy and constructive relationships can be - and to see the characters mess up a lot before they get there.” And in the meantime? “Over April break, once we release that trailer, I’ll be able to paint my apartment,” she laughs. “I took a whole week off, which I haven’t done in maybe two or three years. I’ve just been working on this show and the rest of my musical life. It’s a huge deal that I’m taking a whole week over Passover. So that’s when I’ll paint the apartment and maybe get a couch.” That’s life for you: some minor details may take longer than others but hopefully it’s always a rewarding work in progress. Follow the journey at https://risinginlovethemusical.com. PRH