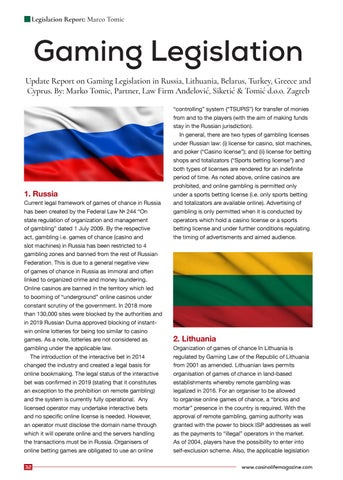 to booming of “underground” online casinos under constant scrutiny of the government. In 2018 more than 130,000 sites were blocked by the authorities and in 2019 Russian Duma approved blocking of instantwin online lotteries for being too similar to casino games. As a note, lotteries are not considered as gambling under the applicable law. The introduction of the interactive bet in 2014 changed the industry and created a legal basis for online bookmaking. The legal status of the interactive bet was confirmed in 2019 (stating that it constitutes an exception to the prohibition on remote gambling) and the system is currently fully operational. Any licensed operator may undertake interactive bets and no specific online license is needed. However, an operator must disclose the domain name through which it will operate online and the servers handling the transactions must be in Russia. Organisers of online betting games are obligated to use an online 32

“controlling” system (“TSUPIS”) for transfer of monies from and to the players (with the aim of making funds stay in the Russian jurisdiction). In general, there are two types of gambling licenses under Russian law: (i) license for casino, slot machines, and poker (“Casino license”); and (ii) license for betting shops and totalizators (“Sports betting license”) and both types of licenses are rendered for an indefinite period of time. As noted above, online casinos are prohibited, and online gambling is permitted only under a sports betting license (i.e. only sports betting and totalizators are available online). Advertising of gambling is only permitted when it is conducted by operators which hold a casino license or a sports betting license and under further conditions regulating the timing of advertisments and aimed audience.

Organization of games of chance In Lithuania is regulated by Gaming Law of the Republic of Lithuania from 2001 as amended. Lithuanian laws permits organisation of games of chance in land-based establishments whereby remote gambling was legalized in 2016. For an organiser to be allowed to organise online games of chance, a “bricks and mortar” presence in the country is required. With the approval of remote gambling, gaming authority was granted with the power to block ISP addresses as well as the payments to “illegal” operators in the market. As of 2004, players have the possibility to enter into self-exclusion scheme. Also, the applicable legislation www.casinolifemagazine.com 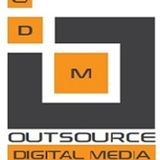