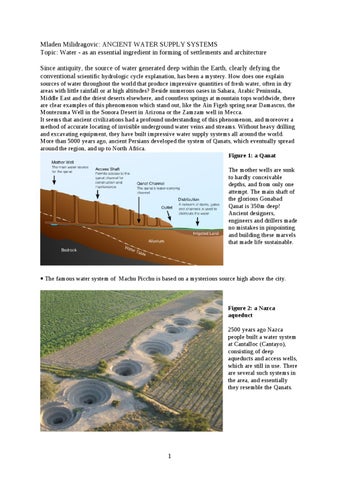 Mladen Milidragovic: ANCIENT WATER SUPPLY SYSTEMS Topic: Water - as an essential ingredient in forming of settlements and architecture Since antiquity, the source of water generated deep within the Earth, clearly defying the conventional scientific hydrologic cycle explanation, has been a mystery. How does one explain sources of water throughout the world that produce impressive quantities of fresh water, often in dry areas with little rainfall or at high altitudes? Beside numerous oases in Sahara, Arabic Peninsula, Middle East and the driest deserts elsewhere, and countless springs at mountain tops worldwide, there are clear examples of this phenomenon which stand out, like the Ain Figeh spring near Damascus, the Montezuma Well in the Sonora Desert in Arizona or the Zamzam well in Mecca. It seems that ancient civilizations had a profound understanding of this phenomenon, and moreover a method of accurate locating of invisible underground water veins and streams. Without heavy drilling and excavating equipment, they have built impressive water supply systems all around the world. More than 5000 years ago, ancient Persians developed the system of Qanats, which eventually spread around the region, and up to North Africa. Figure 1: a Qanat The mother wells are sunk to hardly conceivable depths, and from only one attempt. The main shaft of the glorious Gonabad Qanat is 350m deep! Ancient designers, engineers and drillers made no mistakes in pinpointing and building these marvels that made life sustainable.

â&amp;#x20AC;˘ The famous water system of Machu Picchu is based on a mysterious source high above the city.

Figure 2: a Nazca aqueduct 2500 years ago Nazca people built a water system at Cantalloc (Cantayo), consisting of deep aqueducts and access wells, which are still in use. There are several such systems in the area, and essentially they resemble the Qanats.

• Giza plateau water wells and tunnels have never been understood completely. Figure 3: the Gibeon well The water wells of Gibeon and Beersheba, and huge cisterns of Masada in what is now Israel, are a total puzzle to modern hydrogeologists. The cylindrical shafts in Gibeon are cut in solid rock – this one around 10m wide and 18m deep. 3000 tons of limestone were removed by the excavators to reveal the system!

In modern times, it was Leonardo da Vinci who first tackled this matter scientifically. In “The Notebooks“, he summed it up: “The waters start from the bottom of the seas, and ramifying through the earth they rise to the summits of the mountains, flowing back by the rivers and returning to the sea“. To this, a brief comment should be added: these rivers and streams are not necessarily visible. Sometimes they break through impermeable layers forming springs, sometimes not, flowing at some depth under the surface. A perfectly plausible scientific explanation for such a cycle exists, but it would go beyond the scope of this paper. Today, we can often hear that the planet is in fresh water crisis. In 1982, a fascinating water development program in Sri Lanka was conducted by the German GTZ. Based upon an &#39;unconventional water detection method&#39;, nearly 700 wells were sunk with 96% success rate. A full report on this program can be found in the Stanford University&#39;s Journal of Scientific Explorations at http://www.scientificexploration.org/journal/jse_09_1_betz.pdf , as well as shorter versions. Could this approach be the solution for water shortages around the world?

Surprisingly numerous and rich examples of the ancient &#39;water art&#39; exist in this region too. Figure 4 This stone-lined well has tapped a very shallow water vein, on the Adriatic Coast, around 200m above sea level, in the area with very dry summers. The well produces constant temperature water year round

Figure 6: One of seven clustered wells at a location in Herzegovina area. Nobody knows their age and purpose...

Figure 7: Another cluster of wells in the same area, and the same mysterious purpose There are more than 250 castles in what was known as Bosnian kingdom. Most of the castles are in poor condition now, but within their confines, cylindrical or rectangular stone-lined shafts can be found. Conventionally, they are recognized as cisterns for collecting rainfall, but in fact they are wells. Unfortunately but expectedly, almost all of the wells have long been filled in, and without proper excavations we cannot know which of them could be put back to work, or whether some of water veins that used to feed them escaped or stopped flowing. Luckily, some of the wells still keep telling the story.

Figure 8 The well at Bobovac is always filled with water to the same level, regardless of season. As it can be seen from the photo, it is standing alone on a ridge, just below the fort, and no rainfall could fill it up to this level. Bobovac used to be a stronghold of Bosnian kings in the 14th and 15th centuries, but was inhabited in Bronze and Iron ages. Are these wells inherited?

Figure 9: Similarly, the well at Ljubuski fort is always full, like a pool. According to locals, its depth has never been measured successfully â&amp;#x20AC;&amp;#x201C; because of strange swirls at its bottom! When I mentioned this to a professor emeritus who is still the foremost authority on geology and geomorphology of this country, he immediately agreed that it could not possibly be a cistern.

Figure 10: During Austro-Hungarian rule, this water station has been built within the Jajce castle, on the top of a hill. The water still supplies the Upper town. A local said that the water has originally been brought from another hill by means of underground tubes, but not a single trace of them has ever been seen. The source of water, most probably a well, had apparently existed before, and we can rightly assume that it was just captured later.

Figure 11: The Kozograd well above Fojnica has been cut in solid rock, with masonry toward the slope. Locals say that it is more than 20m deep, with stairs spiraling down. If the well was not filled in, it could easily be seen that it is very similar to the Gibeon well - with a huge distinction: The Gibeon well is world famous, but nobody knows about this one! Figure 12: Pictured below is the Travnik castle well, perhaps the deepest of all. Allegedly, its upper portion was modified to a jail in Otoman times â&amp;#x20AC;&amp;#x201C; which clearly speaks about its dimensions. It can be seen that it has never been plastered, which means that it was not meant to be waterproof â&amp;#x20AC;&amp;#x201C; the same stands for all other wells in the region.

A few notes on the &#39;cistern theory&#39;: these structures have not been built waterproof, and therefore could not keep precious water long; the quantity of water captured during a rain would soon appear to be critically low, particularly during winters and summers; also, these structures are, as a rule, placed &#39;vertically&#39; â&amp;#x20AC;&amp;#x201C; meaning that their depths are considerably bigger than their lengths, widths or diameters; if hundreds of cubic meters of rock were to be excavated for a cistern, would it not be more reasonable and uncomparably easier to excavate &#39;horizontally&#39; rather than &#39;vertically&#39;? Being the only source of water for a settlement, such a &#39;cistern&#39; would be an extremely unreliable solution, especially during sieges â&amp;#x20AC;&amp;#x201C; so interpretations that these objects were originally built as cisterns, reservoirs or containers should finally be dismissed.

Figure 13: Recently unearthed well of the Visoki royal fortress, on the top of the controversial, pyramid shaped hill (Bosnian Pyramid of the Sun) above the town of Visoko. The site was also inhabited during Illyrian and Roman times, and probably hides more secrets. The photo was taken before a serious damage was inflicted by a storm. Having its inner diameter in mind, it is hard to believe it served as a cistern.

Figure 14 (below): This is how a freshly renovated &#39;cistern&#39; at the Blagaj fortress looks after the experts&#39; intervention. Hopefully this will be the last and only intervention of this kind â&amp;#x20AC;&amp;#x201C; sadly, it is most probably too late to return this well to its original state.

It is clear that with proper understanding of origin and circulation of so called primary or crystal waters, a better stance toward a significant portion of our past could be attained. On the other hand, possibilities are huge in planning of settlements, industrial and recreational grounds, mountain and seaside resorts etc. A perfect example is the development of California City fifty years ago. It is easy to find out that it has been built around &#39;an 11 hectares artificial lake&#39;, but there is no mention of how that lake was

formed. Amazingly, in the middle of the Mojave Desert, Stephan Riess located and developed a primary water supply, satisfying needs of all the future inhabitants, along with a lake, park and a waterfall!!! 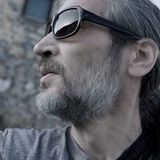