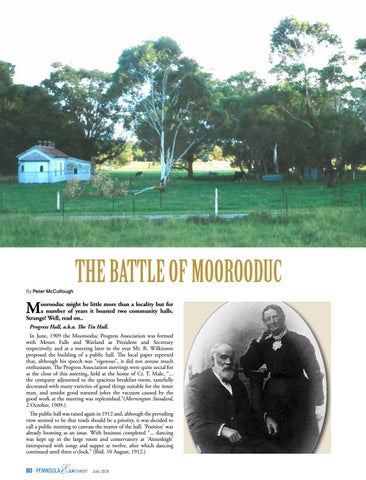 THE BATTLE OF MOOROODUC

oorooduc might be little more than a locality but for a number of years it boasted two community halls. Strange? Well, read on.. Progress Hall, a.k.a. The Tin Hall.

In June, 1909 the Moorooduc Progress Association was formed with Messrs Falls and Warland as President and Secretary respectively, and at a meeting later in the year Mr. R. Wilkinson proposed the building of a public hall. The local paper reported that, although his speech was “vigorous”, it did not arouse much enthusiasm. The Progress Association meetings were quite social for at the close of this meeting, held at the home of Cr. T. Male, “... the company adjourned to the spacious breakfast room, tastefully decorated with many varieties of good things suitable for the inner man, and amidst good natured jokes the vacuum caused by the good work at the meeting was replenished.”(Mornington Standard, 2 October, 1909.) The public hall was raised again in 1912 and, although the prevailing view seemed to be that roads should be a priority, it was decided to call a public meeting to canvass the matter of the hall. 'Position' was already looming as an issue. With business completed “... dancing was kept up in the large room and conservatory at 'Annesleigh' interspersed with songs and supper at twelve, after which dancing continued until three o'clock.” (Ibid. 10 August, 1912.)