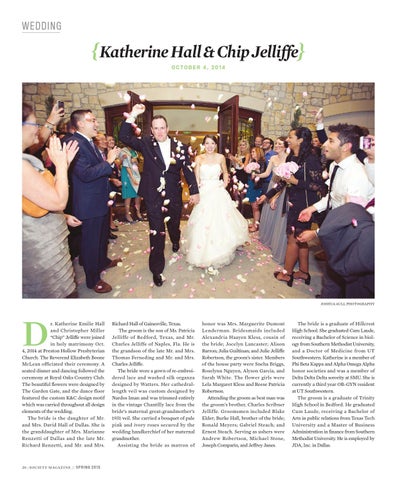 r. Katherine Emilie Hall and Christopher Miller “Chip” Jelliffe were joined in holy matrimony Oct. 4, 2014 at Preston Hollow Presbyterian Church. The Reverend Elizabeth Boone McLean officiated their ceremony. A seated dinner and dancing followed the ceremony at Royal Oaks Country Club. The beautiful flowers were designed by The Garden Gate, and the dance floor featured the custom K&C design motif which was carried throughout all design elements of the wedding. The bride is the daughter of Mr. and Mrs. David Hall of Dallas. She is the granddaughter of Mrs. Marianne Renzetti of Dallas and the late Mr. Richard Renzetti, and Mr. and Mrs.

Richard Hall of Gainesville, Texas. The groom is the son of Ms. Patricia Jelliffe of Bedford, Texas, and Mr. Charles Jelliffe of Naples, Fla. He is the grandson of the late Mr. and Mrs. Thomas Ferneding and Mr. and Mrs. Charles Jelliffe. The bride wore a gown of re-embroidered lace and washed silk organza designed by Watters. Her cathedrallength veil was custom designed by Nardos Iman and was trimmed entirely in the vintage Chantilly lace from the bride’s maternal great-grandmother’s 1931 veil. She carried a bouquet of pale pink and ivory roses secured by the wedding handkerchief of her maternal grandmother. Assisting the bride as matron of