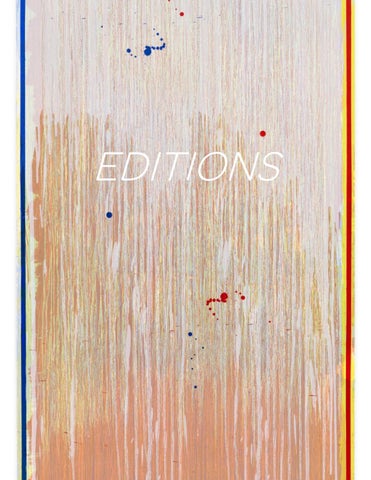 EDITIONS a group exhibition featuring prints and works on paper by

is a second-generation Pop artist. His paintings and prints are a reflection of a passion for collecting pop images and objects. Combining these images with his own uninhibited style of painting, Baechler creates what he calls an “illusion of history.” Baechler studied at the Maryland Institute, College of Art, Cooper Union, and the Staatliche Hochschule für bildende Künste, “Staedelschule” in Frankfurt am Main, Germany. His work is in the collections of The Museum of Modern Art, The Whitney Museum of American Art, The Guggenheim Museum, The Museum of Contemporary Art, Los Angeles and The Centre George Pompidou, Musée National d’Art Moderne, Paris among other institutions worldwide.

born in 1978 in Danbury, CT. She earned her BFA from Rhode Island School of Design and her MFA from Virginia Commonwealth University. Her paintings draw inspiration from the ecosystems of the East Coast where she lives, and the places she discovers through travel. She has been an Artist-in-Residence at Onoma Fiskars in Finland and the Jentel Foundation in Wyoming. Chan lives and works in Richmond, VA, and has recently received grants from the Pollock Krasner Foundation and the Virginia Commission for the Arts. Chan’s abstract paintings are views of the natural world multiplied into the bizarre. The richly layered surfaces combine gouache, acrylic, airbrush and screen print, while taking cues from microscpic imagery, decorative pattern, coral reefs and outer space.

Mark Fox was born in Cincinnati, Ohio in 1963. He received his Bachelor of Fine Art from

is a Venezuelan-American artist who immigrated from South America at an early age. Figueredo’s work looks closely at the forces and issues affecting today’s world—economy, religion, immigration, power—and relates those incidents to the visual history of ancient civilizations, the colonization of the Americas, and mythology. Figueredo is the 2019 Fountainhead Fellow at VCU. Recent awards include The Elizabeth Foundation for the Arts, Robert Blackburn Printmaking Award (2019), and the Nadine Goldsmith Fellowship. He was a resident at Vermont Studio Center in 2019. Figueredo studied at Purchase College (SUNY) earning a BFA in 2004 and earned his MFA from Mason Gross School of the Arts, Rutgers University in 2019. Figueredo currently lives and works in Richmond, Virginia.

Isa Gagarin is an interdisciplinary artist whose work explores subjects including color,

natural phenomena, and autobiography. Using painting, drawing, installation, performance, and video, Gagarin explores color relationships with an emphasis on working responsively to site. The transient qualities of natural phenomena such as solar eclipses, tides, and rainbows prompt Gagarin to draw connections between her work and personal-political experiences of place in Hawai’i and Guam. Gagarin holds an MFA in Painting and Printmaking from Virginia Commonwealth University and a BFA in Painting from Minneapolis College of Art and Design. Gagarin lives and works in Minneapolis, Minnesota.

was born in Asheville, NC. He was a veteran of World War II and studied at the Black Mountain College, where he learned color theory from Josef Albers. A leading American Color Field painter, his interest in working with flat colors developed into a fixation with simple shapes like chevrons, stripes, and bullseyes. Noland helped start the Washington Color School, and represented the United States in the 1964 Venice Biennale. His work can be found in the permanent collections of the Centre Georges Pompidou in Paris, the Phillips Collection in Washington, D.C., the Whitney Museum of American Art in New York, the Tate Gallery in London, and the Virginia Museum of Fine Arts.

is a Philadelphia based artist that works in printmaking, drawing and sculpture. Currently, they are the resident at Vermont Studio Center. Their work is about queering the body, investigating new possibilities, and different realities. Through a monoprint stencil technique, the body is reimagined by conceptualizing it in parts, using an index of abstract, fragmented shapes.

makes work that focuses on the relationship between the past and present, and the tension between the flatness of the picture plane and the expanse of the American landscape. Steiger received his M.F.A. from Yale University in 1989. His work has been shown in over 30 solo exhibitions internationally and a 200 page monograph of the artist was published in 2011 by Hudson Hills Press.

Pat Steir is an American painter and printmaker. Her early work was loosely associated

with conceptual art and minimalism, however, she is best known for her abstract dripped, splashed and poured “Waterfall” paintings, which she started in the 1980s, and for her later site-specific wall drawings. With a career that has spanned over half a century, Pat Steir is a leading force in the development of Postmodern abstraction. Born in 1938 in Newark, NJ, she received her BFA from the Pratt Institute in New York in 1962 and befriended and studied with many influential Conceptual and Minimalist artists of the day, including Sol Lewitt and Agnes Martin. Steir is represented in the collections of The Museum of Modern Art in New York and the Walker Art Center in Minneapolis, among others.

to depict everyday subjects. Sultan uses recurring imagery—such as flowers, playing cards, and lemons—to create colorful still lifes framed by tar-black backgrounds. Born in 1952 in Asheville, NC, he received his BFA from the University of North Carolina in Chapel Hill and later his MFA from the School of the Art Institute Chicago before moving to New York in 1975.

In the city, he became a part of the New Image movement along with fellow painters Susan Rothenberg and Julian Schnabel. His work is included in the collections of the Art Institute of Chicago, the Tate Modern, the Whitney Museum of American Art, and the Museum of Contemporary Art in Tokyo, among many others.

body. Born in 1954 in Chicago, IL, Williams studied at Cooper Union before transferring to California Institute of the Arts where she received her BFA in 1976. Williamsâ&#x20AC;&#x2122; playful works are filled with abstractions of body parts. Her extraordinary lines upon close viewing display an arena of intermingling shapes of body forms merging into one another. Sue Williams uses the human body as a tool to discuss complex issues of gender roles and relations. In 1993, she was awarded a Guggenheim Fellowship, and was included in the 1993, 1995, and 1997 Whitney Biennials. Her work is included in many public and private collections including the Hirshhorn Museum and Sculpture Garden, The Museum of Modern Art and the Centre dâ&#x20AC;&#x2122;Art Contemporain in Geneva. 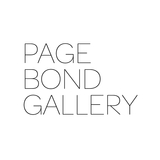