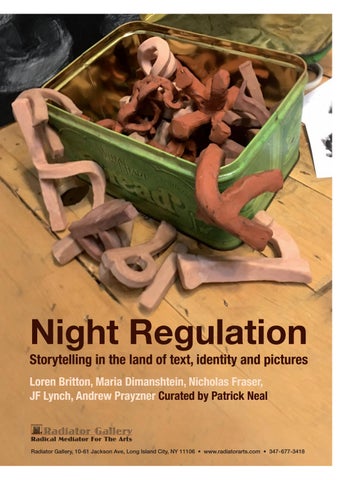 If You See Something, Say Something The artists in Night Regulation capture words peppered in the midst of daily urban existence and draw on unexpected sources to make text-based artworks. In keeping with this appreciation of creativity found in unlikely places, many of the words and images on this broadsheet are the accumulated iphone shots I took while riding the subway, visiting artists’ studios and seeing their works. Subway posters, ads, architectural elements and books crossed my sight-line as I rode, as did an accumulation of literature in the form of essays, books, press releases and reviews while I researched the exhibition. As I compiled all of these materials, I had an image in the back of my mind; Malevich’s Lady at the Poster Column, a pioneering Cubist painting, itself heavily collaged with words and pictures. At the tail end of my studio visit with Andrew Prayzner, he showed me works in progress, a collection of paintings all with thin shocks of blue line set against rich black grounds that looked like miniature Barnett Newman’s. Prayzner (whose paintings pair sourced images with scrawled words), explained how the symbol is a “blue lives matter” decal people put on their cars to sympathize with the police, a response to Black Lives Matter and an implicit dog whistle. “Blue stripes are also painted on curbs in neighborhoods as signs indicating the community is friendly to police and willing to provide backup”. He was attuned to how the aesthetics of the Blue Lives Matter pictographs recalled heroic modernist painting (which has an inner id examination), a facet missing in the austere little decals and their adherence toward a simplistic tribalism. The vernacular of Abstract Expressionism has been fruitful to artists involved in the New Queer Abstraction, queerifying its tropes from the inside out. Loren Britton has done this across bodies of work in many inventive ways. Britton has been considering the Civil Rights movement of the past in relation to the queer movement of today and was intrigued while leaﬁng through Transvestia, a magazine from the 1960’s dedicated to trans people. They came across a classiﬁed ad from someone named Dawn looking for romance and felt impelled to craft an enthusiastic reply. This exploration of a common history and psychic communication across time and space has assisted Britton in using paper as a medium with which to commiserate; contain and absorb words; mark time and place; paint; write; read and study. Britton has spoke of cursive handwriting as a way of learning language being not so different from making a drawing, and this sentiment is on par with JF Lynch’s longterm investigation of the moment when a written word becomes a gestural drawing. Somewhere in the transformation, the expressive capacity of Lynch, the draftsperson materializes, and therein lies a particular kind of magic. Lynch’s works have an assertive physicality sometimes originating in studies from polymer clay letter maquettes; hybrids of art and text. These 3-D clay forms, existing a bit like words coming to life, writhe and walk across the table, and bear a resemblance to Ed Ruscha’s 2-D painted words. All of the artists in Night Regulation are attuned to sights and sounds that are peripheral, ephemeral, and seemingly inconsequential. Not deﬁnitive statements necessarily, but afterthoughts or digressions, maybe caught in a contest for supremacy between the ego and the id. Several of the artists work with a collision of two different messaging systems seemingly at odds that span public and private selves, high and low culture and industrial media. They assess the failings of a straightforward communication and manage to read between the lines. Banners and pages plastered with messages, suspended from ceilings and walls (a bit like dirty laundry hung out to dry), are a characteristic of works by Maria Dimanshtein and Nicholas Fraser. There is something diaristic in their points of view, having the patience of a dedicated responder, and voiced with the authority of a shrine or plaque. Despite the peculiarities of a human presence, do we know who we are listening to or who is speaking, is the voice live or robotic, and is the information authentic, quantiﬁed, possibly available for purchase? Unanswered messages left on Internet dating sites are cut into the surfaces of Fraser’s banners that are equally sad and hilarious. Dimanshtein, like Prayzner, looks at motivational, mass produced ephemera in the form of generic sunsets, sunups and starry nights riddled with aspirational, religious, self-help or positive psychology connotations. Both Dimanshtein and Fraser manage a pragmatism that cuts through a morass of disingenuity, and animate and shape their words giving personality to the letter forms. Existing as book, poems, notes, or banners, the messages shape-shift from self contained to a universal shout out. Either through minimalism or overload, their works exists as artifacts of a civilization looking for answers. During the past year in America, through an Orwellian lens darkly, we have watched the inversion of meaning in phrases like “Net Neutrality” or “Commission on Voter Fraud”. And, more recently, the CDC’s proposed banning of the words, “science-based,” “evidence-based,” “transgender”, “diversity”, “vulnerable”, “entitlement” and “fetus.” Conversely, the ﬁve artists in Night Regulation offer possibilities and brighten the landscape, conveying truth and beauty by drawing on the synergy when words and pictures embrace and create beautiful music together. –Patrick Neal 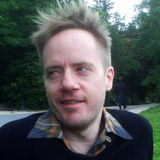