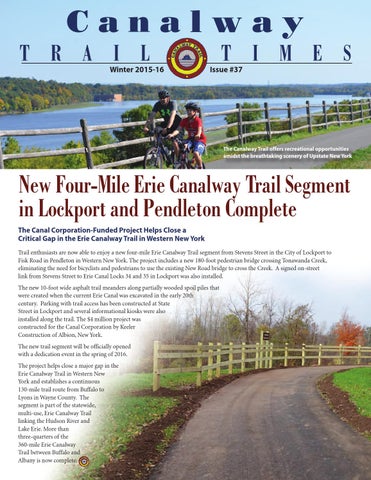 New Four-Mile Erie Canalway Trail Segment in Lockport and Pendleton Complete The Canal Corporation-Funded Project Helps Close a Critical Gap in the Erie Canalway Trail in Western New York Trail enthusiasts are now able to enjoy a new four-mile Erie Canalway Trail segment from Stevens Street in the City of Lockport to Fisk Road in Pendleton in Western New York. The project includes a new 180-foot pedestrian bridge crossing Tonawanda Creek, eliminating the need for bicyclists and pedestrians to use the existing New Road bridge to cross the Creek. A signed on-street link from Stevens Street to Erie Canal Locks 34 and 35 in Lockport was also installed. The new 10-foot wide asphalt trail meanders along partially wooded spoil piles that were created when the current Erie Canal was excavated in the early 20th century. Parking with trail access has been constructed at State Street in Lockport and several informational kiosks were also installed along the trail. The $4 million project was constructed for the Canal Corporation by Keeler Construction of Albion, New York. The new trail segment will be officially opened with a dedication event in the spring of 2016. The project helps close a major gap in the Erie Canalway Trail in Western New York and establishes a continuous 130-mile trail route from Buffalo to Lyons in Wayne County. The segment is part of the statewide, multi-use, Erie Canalway Trail linking the Hudson River and Lake Erie. More than three-quarters of the 360-mile Erie Canalway Trail between Buffalo and Albany is now complete.

Champlain Canalway Trail: Enthusiasm Grows for Completion As 2016 begins, the work of building the Champlain Canal Trail (CCT) as a multi-use path that will link the Erie Canalway Trail with Lake Champlain continues. Construction began last fall on a short gap in Halfmoon, while design work is underway that will lead to construction of several miles of new trail in Waterford, Stillwater, Saratoga, and Kingsbury/Fort Ann. The trail is now about 25% available for public use (including secondary roads designated by towns). Perhaps the biggest success of 2015, however, was a June gathering of more than 50 town supervisors, village mayors and other guests from throughout the corridor to highlight progress, identify next steps and emphasize the benefits the trail will bring to communities. The CCT Supervisors/Mayors Meet-up was held

at Hudson Crossing Park and featured visits to completed sections of trail and lunch on the restored Dix Bridge. The gathering drew significant media coverage and a public commitment by both the Town and Village of Whitehall to complete the trail there, one of the most challenging segments along the route. In August, the CCT Working Group also completed the 4th annual CCT Bicycle Tour, with more than 30 riders starting at Lock 7 near Fort Edward, traveling along the Glens Falls Feeder Canal, visiting the Five Combines (locks) of that historic canal, stopping for lunch in Fort Ann, and boarding the Caldwell Belle, operated by Mohawk Maiden Cruises, for the return to Lock 7 by water.

New Resources for Canalway Trail Users In 2015, with support from a grant from Empire State Development, Parks &amp; Trails New York unveiled CycletheErieCanal.com, the first site entirely devoted to the Erie Canalway Trail. CycletheErieCanal.com combines existing resources – lodging and bike shop listings from the best-selling Cycling the Erie Canal guidebook, self-guided itineraries, and information about the annual bike tour – and new trip-planning tools in one easy-to-use package. New and enhanced features include: Enhanced Interactive Erie Canalway Trail Map – optimized for use on smart phones, the map now includes point-to-point bike and car directions to help you find your way Explore by Region and Explore by Interest pages– easily plan a day or weekend trip on a specific section of the trail or with your personal interests in mind Trail Travelers &amp; Rider Reviews – get inspiration from other trail users Trail Happenings – stay up-to-date with the latest news from the ECT And there’s so much more – Be sure to visit CycletheErieCanal.com to plan your next Erie Canalway Trail adventure!

visit at Canalway Trail Plan your next

Trail enhancements by the Friends of Great Bear

Rolling Out the Welcome Mat What makes a day out on the Canalway Trail special? Well, there’s great natural scenery and, of course working and historic Canal infrastructure. A stop for lunch in a charming community or at a canalside attraction never hurts, either. But it’s really the people that make the Canalway Trail a unique and enjoyable experience. In 2015, the Canalway Trail community, including Trail Ambassadors and Adopt-a-Trail groups, rolled out the welcome mat like never before.

The Adopt-a-Trail program, which enlists the help of community groups to maintain local trail sections, expanded to 58 groups in 2015, with several new groups in the Rochester area and the Capital Region. Trail adopters now maintain over 120 miles of Canalway Trail. Adopters also make enhancements such as this year’s installation of a handicapped-accessible trail by the Friends of Great Bear. Canalway Trail Ambassadors do their volunteering on the move. That is, they provide assistance and a welcome to trail users while riding or walking their local trail sections. Long-serving Ambassador groups in the Rochester and Schenectady areas continued their great work, assisting with directions and local tips, snapping photos, and sharing stories. A new Ambassador in the Old Erie Canal State Park section of trail brought great energy and a helpful spirit to trail users in Central New York. Heading out from his base at the Chittenango Landing Canal Boat Museum, Dave Kellogg logged 54 patrols from June to December. Counting visits to local businesses and civic groups, Dave spent well over 50 hours welcoming trail users and promoting trail use. Thank you to all the members of the Canalway Trail community. Please visit ptny.org for more information on volunteering. Page 4

Canal Corporation Announces Awards to Upstate Municipalities through Governor Cuomo’s Regional Economic Development Initiative Grants Will Fund Improvements to Recreation Sites in Erie Canal Communities The New York State Canal Corporation recently announced that 12 upstate municipalities will receive a total of $1 million in grants from the Canal Corporation as part of the $2.25 billion in awards that Governor Andrew M. Cuomo’s Regional Economic Development Councils (REDC) are providing to spur economic growth throughout New York State. “Governor Cuomo recognizes that New York’s Canal system and the Canalway Trail are economic and recreational anchors for upstate,” said New York State Canal Corporation Director Brian U. Stratton. “The Canal system attracts everyone from outdoor enthusiasts to students of history and everything in between and the grants we have provided to municipalities throughout upstate are vital to their growth.” The grants in this program will support improvement projects along the Canal system across upstate New York. Each project will benefit its respective municipality through investment in the functionality and beautification of areas surrounding the Canal and Canalway Trail, promoting recreation and tourism. The Canal Corporation awards will support the following projects: $37,000 awarded to the Village of Baldwinsville for improvements to public boat launches at Mercer Park and Community Park. $75,000 awarded to the Village of Brockport for phase one of the Brockport Rowing and Canal Development Project.

An organized Sunday run on the trail east of Syracuse

2015 Trail Counts Document a Busy Year on the Canalway Trail

2015 marked the 11th annual trail count conducted by the New York State Canal Corporation and Parks &amp; Trails New York. Trail counts are conducted with the help of local volunteers, in order to develop a comprehensive picture of trail use throughout the Canalway Trail System.

This year trail counts were conducted on the Erie Canalway Trail (ECT) in seven locations. At four of these locations, electronic counters were used to record trail use. Traditional volunteer counts occurred at three locations. At these physical count locations, volunteers also surveyed trail users to learn more about how and why they use the trail. 100%

*Tonawanda figures based on full-year electronic count, rather than estimates

End-to-End on the Erie Canalway Trail – A Historic Achievement!

“We bicycled from Ludington, Michigan to Brooklyn, New York. Watching the fall colors unfold and learning about the history of the Erie Canal along the way were highlights. The designated camping grounds at the locks were wonderful!” — Caito Bowles-Roth and Thomas Dixon, Minneapolis, MN

“I chose to become an End-to-Ender partly for exercise, partly for the personal challenge, and partly because I wanted to see the Erie Canal and experience Upstate New York.” — Jerry Mattern, Brockport, NY

“I chose to become an End-to-Ender because I’m an eighth grade history teacher and I wanted to gather knowledge and the history of the Erie Canal to teach my students in class.” — Paul Henderson, Newmarket, NH

“It was a spectacular trip! We enjoyed the quiet trails alongside the working canal, particularly Lockport to Lyons. We visited every lock we could find and stopped at every historic site and museum.” — Robert Hickman and Charlotte Cohen, Brooklyn, NY

Visit CycletheErieCanal.com for more information and to register. The New York State Canal Corporation has been proud to be the lead sponsor of this event since 2000.