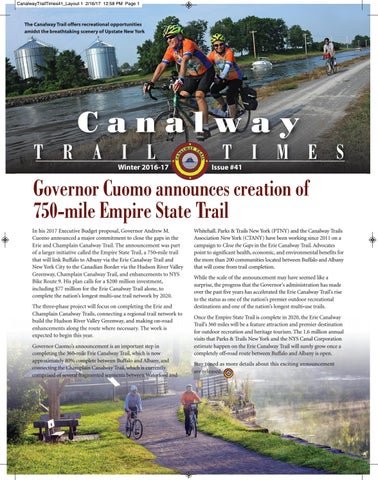 Governor Cuomo announces creation of 750-mile Empire State Trail In his 2017 Executive Budget proposal, Governor Andrew M. Cuomo announced a major commitment to close the gaps in the Erie and Champlain Canalway Trail. The announcement was part of a larger initiative called the Empire State Trail, a 750-mile trail that will link Buffalo to Albany via the Erie Canalway Trail and New York City to the Canadian Border via the Hudson River Valley Greenway, Champlain Canalway Trail, and enhancements to NYS Bike Route 9. His plan calls for a $200 million investment, including $77 million for the Erie Canalway Trail alone, to complete the nation’s longest multi-use trail network by 2020. The three-phase project will focus on completing the Erie and Champlain Canalway Trails, connecting a regional trail network to build the Hudson River Valley Greenway, and making on-road enhancements along the route where necessary. The work is expected to begin this year. Governor Cuomo’s announcement is an important step in completing the 360-mile Erie Canalway Trail, which is now approximately 80% complete between Buffalo and Albany, and connecting the Champlain Canalway Trail, which is currently comprised of several fragmented segments between Waterford and

Whitehall. Parks &amp; Trails New York (PTNY) and the Canalway Trails Association New York (CTANY) have been working since 2011 on a campaign to Close the Gaps in the Erie Canalway Trail. Advocates point to significant health, economic, and environmental benefits for the more than 200 communities located between Buffalo and Albany that will come from trail completion. While the scale of the announcement may have seemed like a surprise, the progress that the Governor’s administration has made over the past five years has accelerated the Erie Canalway Trail’s rise to the status as one of the nation’s premier outdoor recreational destinations and one of the nation’s longest multi-use trails. Once the Empire State Trail is complete in 2020, the Erie Canalway Trail’s 360 miles will be a feature attraction and premier destination for outdoor recreation and heritage tourism. The 1.6 million annual visits that Parks &amp; Trails New York and the NYS Canal Corporation estimate happen on the Erie Canalway Trail will surely grow once a completely off-road route between Buffalo and Albany is open. Stay tuned as more details about this exciting announcement are released.

Anticipated highlights include: The start of construction by the NYS Canal Corporation on 5.5 miles of trail between Kingsbury and Fort Ann Construction of about a mile of trail in Stillwater that will connect existing trail in the Town of Saratoga with Saratoga National Historical Park Completion of a feasibility study to determine the best route for the trail north from Fort Ann to Whitehall Completion of about a mile of trail, with a trailhead, along old canal towpath south of the Saratoga Surrender Site, and possibly a continuation of that segment north to the Schuyler House Construction of the Gateway Visitor Center on the trail in Schuylerville The CCT reached a major milestone in 2016, with more than 30% of the planned route open for public use (including designated road connections)! That milestone, combined with Governor Cuomoâ&amp;#x20AC;&amp;#x2122;s Empire State Trail announcement, points to the Champlain Canalway Trail becoming one of New York Stateâ&amp;#x20AC;&amp;#x2122;s great long-distance trails very soon. Page 2

SAVE THE DATES 1. Canal Clean Sweep, April 21-23, 2017, Join us for the largest Earth Day celebration in New York State! Register Today! For more information, visit ptny.org, email canalsweep@ptny.org, or call 518.434.1583 2. Cycle the Erie Canal, July 9-16,2017 – the 19th annual Cycle the Erie Canal tour is a 400-mile fully-supported eight-day tour that highlights the small town charm, history, and culture along the Erie Canalway Trail. Register and more information available at ptny.org/canaltour. 3. Tour the Towpath, September 23-24. Join the Old Erie Canal State Park working group for the third-annual 36-mile Tour the Towpath from Rome to DeWitt. This year’s Tour the Towpath will be an official part of the 2017 World Canals Conference in Syracuse. Visit tourthetowpath.tumblr.com to learn more.

Erie Canal Bicentennial Celebration Begins in 2017 Construction of the Erie Canal began on July 4, 1817. Several events scheduled for 2017 will celebrate the bicentennial of the waterway that built America – A kickoff celebration in Rome, where the Erie Canal groundbreaking took place in 1817; The Lake Champlain Maritime Museum’s replica canal schooner the Lois McClure will lead Canal tours, and the Albany Symphony Orchestra and the Syracuse Symphonia will lead orchestral tours; World Canals Conference, September 24-28, in Syracuse Erie Canal exhibit at the New York State Museum in Albany opens Fall 2017 For more information, contact William Sweitzer at the NYS Canal Corporation at 518-436-3055 or william.sweitzer@canals.ny.gov.

New trail count numbers confirm popularity of Canalway Trail Parks &amp; Trails New York and the NYS Canal Corporation have just wrapped up their 12th annual trail count along the Canalway Trail and the results show the trail system is as popular as ever. The Canalway Trail Count was conducted at seven locations along the Erie and Champlain Canalway Trails using a combination of electronic counters and volunteers to help get a comprehensive

picture of trail usage over the past 12 months. These numbers are not only used to confirm anecdotal perceptions of the trail’s popularity, but they are also helpful to planners and municipal leaders when they need to justify seeking funding for expansions and enhancements of existing trails. At three locations volunteers surveyed trail users regarding their usage habits and attitudes towards the Canalway Trail. A full analysis of each location is available in the 2016 Who’s on the Trail report accessible at ptny.org.

Mohawk Valley Alpiners rest on the bench they installed along the Erie Canalway Trail in Herkimer County.

Putting In the Time Do you feel a sense of accomplishment after putting in an hour, or a week, on the Canalway Trail? Of course you do, as trail time means exercise, or relaxation, or even just enjoying nature – a chance to “recharge the batteries.” As another great year on the Trail ends, we should take time to acknowledge the trail community that makes these great times on the trail possible. In 2016, Trail Ambassadors and Adopt-a-Trail (AAT) groups devoted considerable time and effort to making the Canalway Trail system a welcoming and enjoyable community space. The Adopt-a-Trail program, which enlists the help of 60 community groups in maintaining 120 miles of local trail sections across the NYS Canalway Trail corridor, had another productive year. AAT groups spent the summer removing trash and debris from the side of the Canalway Trail to ensure a pleasant user experience for all. Some groups even hosted Clean Sweep events to kick off the start of the peak trail usage season.

The Trail Ambassador program, which enlists the help of frequent trail users to provide assistance and a welcome to trail users while riding or walking their local trail sections, added members in 2016 and expanded its coverage area. New Ambassadors in the Capital Region helped the Friends of the Mohawk Hudson Bike Hike Trail (the easternmost section of the Erie Canalway Trail) to achieve a first: regularly scheduled patrols. Altogether, 20 Capital Region Ambassadors logged nearly 3,000 miles on the trail this year! Not to be outdone, the “2 Daves,” long-serving Ambassador Dave Valvo, in the Rochester area, and second-year Ambassador Dave Kellogg, in the Old Erie Canal State Park section of trail, both logged huge numbers of hours and miles on the trail. Dave Kellogg also joined the ranks of Ambassadors to be honored with the NYS Canal Corporation’s Trail Tender Award. Congratulations Dave! Join us in thanking all the members of the Canalway Trail community for “putting in the time!” and visit ptny.org for information on volunteering.

What inspired your End-to-End journey? We wanted a different sort of challenge, with lots of physical activity and time with friends and family. We loved the scenery, canalside towns and canal history. Maybe we’ll do a longer trip next time… like across the USA! — Stephanie Prior, Falmouth, MA &amp; Ariadne Prior-Grosch, Astoria, NYC

We enjoy long, multi-day cycling trips, and wanted to challenge ourselves with a ride across the state. It was a great adventure, and we loved experiencing beautiful parts of New York State and the history of the canal! — Pamela &amp; Gary Johnson, Windber, PA

99 completed the trail on a self-supported trip – an increase of 60% from 2015! Australia, Canada, 37 U.S. States and DC represented I started riding a bike again at age 55 following a heart attack, and have averaged over 2000 miles per year since then. I rode from my home near Schenectady to Syracuse in 2013, and finally finished the rest of the trail last spring. — John Major, Rotterdam, NY

4 End-to-Enders completed the trail on foot in 2016 3,004 End-to-Enders since 2012 First elected official to ride End to End – Assemblymember Patricia Fahy

We wanted to do a long hike, and became obsessed with the idea during our boat tour of the locks in Lockport. A highlight of the trip was being “kidnapped” by an elderly gentleman in Jordan who then guided us through the local museum, which he unlocked especially for us. — Leah &amp; Steve Martaindale, Bryan, TX

It was one of the most fascinating things I have ever done. It really taught me a lot about upstate New York. It was spectacularly beautiful. I did it as a way to learn the state. I feel like I got some great insight into the small towns and cities of upstate. — Assemblymember Patricia Fahy, Albany, NY

Open for Business New Bike Friendly New York certification program invites businesses across the Canal Corridor to let cyclists know their doors are open. In 2017, PTNY and the NYS Canal Corporation will introduce Bike Friendly New York (BFNY), a new certification program for businesses along the Canalway Trail system. While several New York communities and a few other states and Canadian provinces have bike-friendly programs, BFNY will be New York’s first large scale bike-friendly certification. Goals for the program include an improved level of service for cyclists on the Canalway Trail and across New York, as well as another opportunity for cycling-based economic development at the local level. To participate, businesses must demonstrate that they have taken steps to cater to cyclists, such as becoming knowledgeable about local trails and cycling routes, having basic repair tools available, or offering one-night reservations for cyclists passing through. Above these basic requirements, which vary slightly based on business category, participating businesses can choose from a list of additional amenities that they commit to offering to “wheeled” visitors. Assistance with bike shipping, luggage transport, or discounts for cyclists are examples, but businesses also have the option of suggesting new amenities to add to the list. Businesses that meet the requirements and complete the online application will receive a decal to display at their business, as well as being included in an insert in the Cycling the Erie Canal guidebook and on www.CycletheErieCanal.com. PTNY will also publicize the list of certified Bike Friendly Businesses through social media and press releases. More information, including program materials and the online application, can be found at www.ptny.org/bikefriendly. Make cycling your business in 2017 with Bike Friendly New York!

2017 Cycle the Erie Canal Tour Returns July 9-16 Parks &amp; Trails New York’s fully-supported Cycle the Erie Canal tour is returning for its 19th year this July, just in time to celebrate the beginning of the bicentennial celebration of the Erie Canal. Join more than 650 cyclists for eight days on one of the country’s premier multi-use trails as you cycle along the legendary Erie Canal through iconic port towns such as Lockport and Brockport and places rich in history such as Seneca Falls and Rome. The 2017 Cycle the Erie Canal tour will leave Buffalo on July 9 and arrive in Albany eight days later on July 16. On the ride, all you have to do is enjoy spending your day cycling and visiting small towns, museums, and historic sites – the rest is taken care of for you!

Visit ptny.org/canaltour for more information and to register.