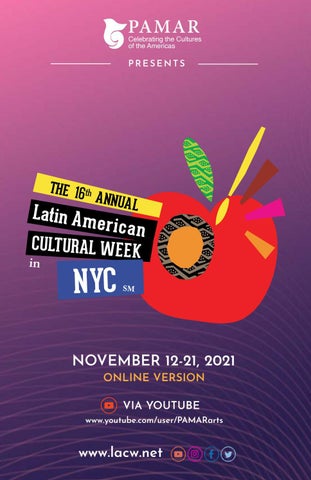 Celebrating the Cultures of the Americas

PAN AMERICAN MUSICAL ART RESEARCH Pan American Musical Art Research, Inc., (PAMAR) is a registered non-proﬁt organization seeking to promote better understanding between the various cultures and countries of the Americas, primarily through an ongoing and vital exchange of their artistic expressions. Founded in 1984 in New York City by Polly Ferman, Uruguayan born pianist and music director, PAMAR has taken signiﬁcant steps toward establishing itself as an artistic resource center. PAMAR has served thousands of performing artists, through an ongoing presentations program in national and international venues. www.pamar.org

LATIN AMERICAN CULTURAL WEEK IN NEW YORK CITY Launched in November 2006, Latin American Cultural Week (LACW) is a New York City-wide annual festival, showcasing the richness and variety of the cultures of Latin America, the Caribbean and Spain. Partnering with organizations and artists from around the world, LACW’s goal is to present the highest quality art and artists to the broadest cross-section of the community. www.lacw.net

Celebrating the Cultures of the Americas

tangueros and milongueros, at the Oliverio Girondo Cultural Space together with great musicians such as Horacio Romo, Daniel Falasca, Pablo Agri and Analía Goldberg.

“QUANTUM” is a multimedia show in which music, dance and visual projections generate an impressive staging that fuses various styles ranging from baroque, ethnic and lyrical electronic. It is a multi-sensory experience that transports the viewer on a surprising journey. “QUANTUM” is the smallest unit of matter. It is the ﬁnal frontier of our material universe, and the beginning of another in which everything is possible.

MONDAY, NOVEMBER 15 7:30 pm | New York Time Beauty, energy, sensuality, soul and passion are all an integral part of the project by Purpura Pansa. Combining two of the most common musical styles in their repertoire and with those that most connect with their audience: zarzuela and tango; the latter, the most recognized genre of Argentine popular music. In this concert the quartet performs works by composers such as Andrés Valero-Castells, R. Chapí, J. Serrano, D. Binelli and A. Piazzolla. Javier Teruel Orts baritone saxophone Héctor Andrés Agulles tenor saxophone Juanlu Gozálvez Devís alto saxophone Manuel A. Romero Perálvarez soprano saxophone

As a tango broken by lies, snapped by the artiﬁcial human relationships, emotions and feelings prefabricated by society, that&#39;s life in a brothel in Buenos Aires at the beginning of the twentieth century. BROKEN TANGO 2.0 springs from the purest and darkest soul of the city to eventually arrive at the latest forms of interpreting tango in the particular R.E.A Dance Company&#39;s way. We didn&#39;t want to get stuck to the original and traditional tango, but to show how that early twentieth century dance has continued to live by transforming itself through the movement of the bodies that inherited its language adding new gestures over the last hundred years.

A journey where the gypsy sound of la Negra is reinvented, a pop fusion that deconstructs genres such as ﬂamenco, jazz or psychedelic with the special collaboration of Jerry Gonzales

As its name indicates, Complicidad (Complicity) does not imply the synthesis of two diverse but related disciplines, but rather the poetic gesture that arises from the encounter between the two. A dialectic that, based on the investigation of language and movement, supposes the link between the parts without any of them being denatured. Born of invention and experiment, the virtuosity of Complicidad offers a new body inhabited by multiple spirits. A montage in which a visual and sound story unfolds; as a canvas where the presence of mixed techniques that animate the total composition, does not prevent the pure and essential notes of each of the parts that make it up.

In March 2021 La Grela Quinteto was summoned to pay tribute to the great Astor Pizzolla on his centenary at the Teatro Colón in Buenos Aires, a cycle called &quot;Piazzolla100&quot;. For this event, a special repertoire was prepared entirely made up of compositions by Piazzolla and the quintet summoned the singer Inés Cuello, an already established ﬁgure on the current tango scene, who sings regularly with La Grela. On the occasion of the LACW (Latin American Cultural Week) call, La Grela Quinteto + Inés Cuello partnered for a special performance for the Festival incorporating new arrangements of Piazzolla&#39;s work that are premiered on this occasion added to the repertoire performed at the Colón, which will soon be part of an album.

CORALIA ARTIS - Acción Solidaria presents on this occasion an eclectic program that brings together prominent and well-known choral themes from the Latin American and European repertoire in different styles. The unpublished arrangements and adaptations written by its director, Maestra Montserrat De La Cruz, turn this repertoire into a very attractive and dynamic choral experience in sound and image. The repertoire will be interpreted in Spanish, English, French and Portuguese, thus bringing together some of the most widely spoken languages on the American continent.

Maryta, heir to an ancient culture, carries in her song the Andean sounds with which she was born in Quebrada de Humahuaca, belonging to the Kolla or Qolla ethnic group. Her songs from distant times are linked to those of the indigenous communities with whom she shares and regenerates a current sound, linked to the melodies of the ancestors on this side of the world. Voice, drums added to different wind instruments and even the wind itself from the colorful “hills” of northern Argentina, invite the wonderful energy of the Pachamama (the Goddess of the Earth).

OFFICIAL SPANISH LANGUAGE NEWSPAPER IN NYC FOR THE EVENTS

Latin American Cultural Week 2021 is made possible in part with public funds from Creative Engagement and Restart NY, supported by New York State Council on the Arts with the support of Governor Andrew Cuomo and the New York State Legislature and with funding from the Upper Manhattan Empowerment Zone Development Corporation, administered by LMCC.

Launched in November 2006, Latin American Cultural Week (LACW) is a New York City-wide annual festival, showcasing the richness and variety of the cultures of Latin America, the Caribbean and Spain. Partnering with organizations and artists from around the world, LACW’s goal is to present the highest quality art and artists to the broadest cross-section of the community. www.lacw.net 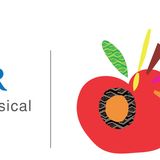