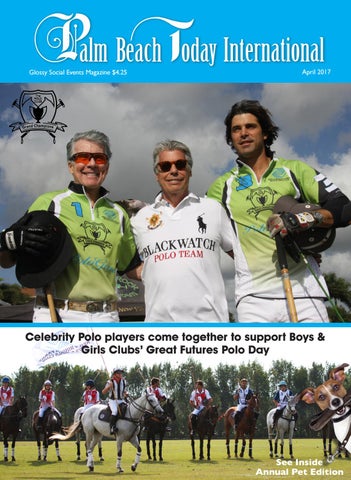 complete salon & spa services Whether you have a minute, an hour or an afternoon, lavish yourself from head to toe, with top beauty experts.

We also have a unique Tara Inc. Photography

boutique that offers clothing & accessories from all over the world.

understands as well as anyone the importance of dealing with health professionals who are focused on meeting the specific needs of the client.

Palm Beach County and their equestrian communities gathered together on Sunday, February 12, for the Equestrian Aid Foundation’s annual event; a night that they will never forget. Althea was held at The Global Dressage Festival Stadium of Palm Beach International Equestrian Center. “For this year’s benefit, we decided to take a unique approach. We provided a magical and magnificent experience presented by both humans and horses,” said Equestrian Aid President Stephanie Riggio Bulger. “This organization is incredibly grateful to Keith Greco for this compelling performance. The success of tonight will provide Equestrian Aid with the opportunity to help many horsemen and horsewomen in need.”

Produced by Keith Greco, Althea was a tribute to the one of a kind relationship between horses and humans. The equestrian ballet told the story of Argos, a horseman who is crippled and despairing, who finds himself in a land where a magical stallion, Althea, has the power to heal. The evening raised money to support Equestrian Aid programs that provide financial assistance to those in the equestrian community suffering from chronic illness and injury. Former Cavalia headliners Sylvia Zerbini, S. Caleb Carinci-Asch, Kansas Carradine, other equestrian artists and their breathtaking horses kicked off the evening with their spectacular performance, which was created exclusively for the night. The evening included VIP cocktails and dinner, as well as a live and silent auction, with unique items such as a vintage Mercedes, a month of training with Rio Olympic Dressage team member, Steffen Peters, and a sunset yacht cruise.

“I was excited to produce this event for a wonderful organization such as Equestrian Aid Foundation,” said Keith Greco. “There are so many men and women in need of assistance from all corners of the horse world who are coping with life-changing injury or illness and financial crisis. Without Equestrian Aid they would be lost. I look forward to seeing how the success of this evening will help those in need.”

French Heritage Society Hosts Palm Beach Gala Dinner at Club Colette The French Heritage Society and notable guests gathered at the elegant Club Colette on the evening of February 16th for their annual Palm Beach Gala Dinner. The honored guest was Timothy Corrigan, award-winning interior designer with offices in Los Angeles and Paris. He is known for creating a “world of comfortable elegance,” and has projects spanning the globe. The stunning fête was held at the behest of Gala Chairs Michael Kovner and Jean Doyen de Montaillou. Additional flair was provided by CeCe Black, Board Chair of Special Events, Suzanne Stoll, Palm Beach Representative, and in the presence of FHS Chairman Elizabeth F. Stribling, FHS President Denis de Kergorlay and Consul General of France in Miami, Clément Leclerc.

The Perlman Music Program Tenth Anniversary Concert and Dinner in Palm Beach Hosted by Kristy and Jim Clark Friday, February 17, 2017 The Perlman Music Program (PMP) held a spectacular concert and dinner at Kristy and Jim Clark’s stunning Palm Beach home. Co-hosted by Emilia and Pepe Fanjul, and with 150 music lovers and philanthropists in attendance, the evening honored Toby and Itzhak Perlman’s dedication to classical music’s bright future. This special event marked a decade of passionate support from the Palm Beach community for the Perlman’s exceptional young students. “I was inspired when I first met Itzhak and Toby and learned about PMP,” said Jim Clark. “I went to Shelter Island, heard some of the concerts, and decided to encourage my friends and neighbors in Palm Beach to get involved. An incredible amount of talent has come through their school– it’s turned into a big success.” The evening began with a reception on the veranda, followed by a performance in the Clarks’ elegant living room presented by several of PMP’s outstanding students and alumni. The concert included sparkling violin duos by Leclair and Bartok, elegant string quartets by Mozart and Mendelssohn, and the monumental first movement of Dvorak’s piano quintet. The talented and poised performers introduced each piece and  brought the composers to life in their own words.

Toby Perlman and Jim Clark concluded the concert with a spirited conversation and a challenge to support PMP’s incredible talent. Guests responded with a spontaneous show of support, instantaneously funding more than ten scholarships for PMP’s signature summer program. Toby expressed her heartfelt thanks to all in attendance, in particular Jim and Kristy Clark, Emilia and Pepe Fanjul, and Vicki and Chris Kellogg, before inviting guests to experience the PMP magic firsthand this summer on the program’s historic Shelter Island campus. To bring the evening to a rousing close, the guests toasted the incredible music and beautiful weather at a festive dinner under the stars.

Doug Evans, Chairman of the Board

On Tuesday , March 7, 2017, Frank Holder addressed an audience of 200 World Affairs Council members and guests at the Colony Palm Beach Pavilion Room. Holder is Managing Director and Head of Latin America for Berkeley Research Group. He spoke about Venezuela and its decline as a powerful economy - in part due to the collapse of oil prices. President Maduro has continued the legacy of Chavez as a corrupt dictator. Although Venezuela is rich in oil and natural resources , the control of a Chavismo government had led to 35% - 45% of the people living in poverty. Over a million middle class Venezuelans have left the country, replaced by a low income populace and Colombian refugees.

Douglas Evans, Chairman of the Board

Q & A from Tobias Tettamanti to Speaker Frank Holder

Frank Holder: Currently today, there has been a shift to the right in Latin America: after being in office, Evo Morales has been more towards the center (not that he is a centrist: he is far from it) and Rafael Corres in Ecuador is losing support for the upcoming elections in 2017 . Mauricio Macri and Pablo Pedro Kuczynski both won their elections in 2016 against their left-wing counterparts.  Latin America has moved from the left to the right, so there is no real country, excluding possibly Ecuador, in danger of any Chavism-like recession.

For the fourth consecutive year, Grand Champions Polo Club was the host of the morning’s celebrity polo match featuring honorary event chairs, Ignacio ‘Nacho’ Figueras - Polo’s international ambassador and one of the most well-recognized players in the world as the face of Ralph Lauren; America’s Most Wanted/The Hunt TV host and child advocate, John Walsh; 5-goal polo star Brandon Phillips; Argentinian Polo Player Martin Pepa; and current Captain of the US Polo Team and Wellington resident, Nic Roldan. Busloads of Club members were present to watch the polo match, meet polo players and get up close to the horses. “For many, it was the first time petting a horse let alone watching a polo match,” said Jaene Miranda, President & CEO of the Boys & Girls Clubs of Palm Beach County. Figueras gave Club member Zyon Foster a ride on his horse between chukkers, while other players took time to sign Club members’ shirts, pose for pictures, and talk to the kids about the game. “It is always fun when you can play polo and do something for kids,” said Figueras. “This is a great group of people coming together to help the Boys & Girls Club, the lifeline for many of these kids. These clubs are changing children’s lives one child at a time. They do God’s work,” said honorary chair John Walsh, an avid polo player who competes throughout the world and plays in several charity events across the nation. Other polo pros and patrons who participated in the three-team, round robin were Joe Dimenna, Grant Ganzi, Mariano Gonzalez, Riley Ganzi, Alejandro Novillo Astrada, Will Jacob, and Annabelle Garrett. The Equuleus team featuring DiMenna, Martin Pepa, Mariano Gonzalez and Grant Ganzi won the polo match. Riley Ganzi from the Valentine Farm team was named Most Valuable Player and Joe DiMenna’s horse Sunbrella was named best playing pony. “Polo and charity go together,” said Neil Hirsch. “These polo players are more like my brothers. They come out here and do this for no personal financial gain. They do it for the children.” Melissa Ganzi, USPA Florida Circuit Governor and Grand Champions President, presented Neil Hirsch with a special award in appreciation for his tireless work with the club named in his honor. “Neil Hirsch has set a great example for our polo community by giving back to those who need us most here in Wellington-our children,” said Melissa Ganzi. “The celebrity match is making an impact on the club members, their families and our community.”

The celebrity match was followed by a brunch at the International Polo Club Mallet Grille. Nearly two hundred guests had an opportunity to view an impressive silent auction and participate of a dynamic live auction that featured fabulous items including Sheriff for a Day, a race car experience with professional race car driver Shane Lewis, Polo VIP tickets with brunch and after party with Nic Roldan and Martin Pepa at the Player’s Club, Polo in Aspen, a Cruise on the Fly, and John Walsh and Nacho Figueras autographed game-worn jerseys. Club member Andrew Valdez shared with the crowd his Club experience in an impressively eloquent speech. After brunch guests had the opportunity to enjoy the 3:00PM Gold Cup Match featuring Grand Champions Polo Club-based pro team Audi with Marc Ganzi, Tomacho Pieres, Gonzalito Pieres and Rodrigo Andrade. Proceeds from the day’s events support the Neil S. Hirsch Family Boys & Girls Club of Wellington, one of 13 Boys & Girls Clubs of Palm Beach County. For more information about this event or about the Boys & Girls Clubs of Palm Beach County, please call (561) 683-3287 or visit www.bgcpbc.org.

Herb in Florida • A Palm Bea

Call Today For Our Intro Specials