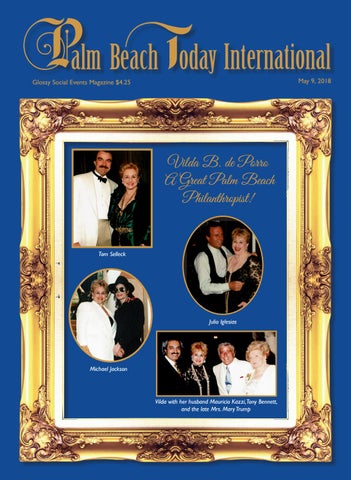 Vilda with her husband Mauricio Kazzi,Tony Bennett, and the late Mrs. Mary Trump

complete salon & spa services Whether you have a minute, an hour or an afternoon, lavish yourself from head to toe, with top beauty experts.

For over 30 years, this house of beauty has been revered for it’s excellence by Palm Beach’s most elite.

We also have a unique Tara Inc. Photography

boutique that offers clothing & accessories from all over the world.

understands as well as anyone the importance of dealing with health professionals who are focused on meeting the specific needs of the client.

This is her goal at Boca Nursing Services, which she launched 18 years ago after spending time as a registered nurse who worked with private patients. “Continuity is very important to our clients,” Glamoclija says. “It’s comforting to know that someone who understands what you need and want is always available to help.” To help ensure continuity of care and provide peace of mind for her patients and their families, Glamoclija developed a team approach designed to proved each client with a team of caregivers. “When I first meet with a patient, I immediately have an idea of which caregivers will make the best team,” she says. “We’ve discovered that there is a high degree of patient satisfaction that results from matching the right team to the patient.” At Boca Nursing Services, it’s not unusual for a team of caregivers to stay with a patient for many years. Whether they’re at home or in the hospital, our clients are able to live more enjoyable lives thanks to the team approach,” Glamoclija says.

A wonderful gathering of “Glamorous Gowns and Gorgeous Gems” to benefit The Palm Beach Opera at the Escada Boutique on Worth Ave. The event showed the new collections from Escada, perfectly paired with the jewelry from Palm Beach resident Harrison Morgan. The melodious voice of the baritone singer Neil Nelson delighted shoppers, as they sipped champagne, nibbled on appetizers, and shopped the afternoon away!

The Flagler Museum Hosts First Ladies Melania Trump and Akie Abe The Henry Morrison Flagler Museum in Palm Beach was honored with a visit by the First Lady of the United States, Melania Trump, and Akie Abe, wife of Japanese Prime Minister Shinzo Abe, for a tour of the museum on Wednesday, April 18, 2018. The First Ladies were guided by Flagler Museum’s Board of Trustees Treasurer, and great-grandson of Henry Flagler, William M. Matthews, and Executive Director Erin Manning, who imparted the story of Henry Flagler, his winter home Whitehall, now the Flagler Museum, and America’s Gilded Age. The tour showcased the splendor of Whitehall’s Grand Hall, Drawing Room, formal Dining Room, Grand Ballroom, and Music Room. The First Ladies also visited the Flagler Kenan Pavilion, which houses Henry Flagler’s Railcar No. 91. The special guests enjoyed a performance of the “Anvil Chorus” from the opera Il Trovatore by Giuseppe Verdi, one of Henry Flagler’s favorite pieces, on the Music Room’s 1,249-pipe Odell organ. It was an exciting and educational experience for all involved. Each year, the Flagler Museum hosts almost 100,000 visitors from virtually every state in the Union, and dozens of countries around the world. 4

Barrett-Jackson, The World’s Greatest Collector Car Auctions®, was a star-studded event that featured celebrity guests from across the entertainment and sports industries, record attendance, record auction sales and the largest number of registered bidders for any Palm Beach auction. Three impressive collections were sold at the 16th annual auction, highlighted by renowned collector and philanthropist John Staluppi’s highly coveted Cars of Dreams vehicles, which all sold at No Reserve. Celebrities who flocked to the four-day auction included Jimmy De Martini, fiddler with the Zac Brown Band, as well as Hollywood icon Burt Reynolds, who greeted fans, signed autographs and encouraged bidding on the block for three Pontiac Trans Ams. Other celebrity guests included actor Alfie Wise, North Carolina Panthers head coach Ron Rivera, NASCAR legend Rick Hendrick and former NFL wide receiver Reggie Wayne. In total, 692 vehicles sold, nearly all at No Reserve, for more than $38.3 million, while 380 pieces of automobilia brought in over $702,000, and $450,000 was raised through the sale of charity vehicles, bringing the total auction sales to more than $39.4 million. This year’s auction also attracted more than 700 new bidders, a new record for Palm Beach. In addition, there was an impressive showing from the international community, including vehicle consignments from Brazil and Italy. “Our guests have made the Palm Beach Auction such an electrifying event year after year,” said Craig Jackson, chairman and CEO of Barrett-Jackson. “We were especially honored to be trusted to auction three incredible collections, including the ‘Cars of Dreams’ owned by our good friends Jeanette and John Staluppi. Their 145 vehicles, which all sold at No Reserve, represented some of the finest examples of ’50s, ’60s and ’70s-era American cars. It was a pleasure working alongside John and Jeanette to find new homes for the vehicles in his remarkable collection, and we so appreciate their philanthropic support of our charity efforts over the years.” “This year’s Palm Beach Auction is proof that it’s a golden age for car enthusiasts and collectors,” said Steve Davis, president of Barrett-Jackson. “We are so thankful for our guests who joined us in Florida and spread their enthusiasm for this great hobby that we all love. We especially appreciate those who contributed to our efforts to raise money for charity. Together we raised $450,000 to help the American Heart Association and Camp Southern Ground move the needle on helping those they support.” Barrett-Jackson’s Northeast Auction will be held June 2023, 2018, at Mohegan Sun in Uncasville, Conn. For more information on becoming a bidder for the 2018 Northeast Auction, go to www.Barrett-Jackson.com/bid. 12

On Tuesday, March 6, 2018, Dr. Varun Sivaram spoke to an enthusiastic audience of World Affairs Council members and guests at the Colony Palm Beach Pavilion Room. Sivaram spoke about the Power of Solar Energy and his commitment to the potential for Solar Energy to become a main source of power for America and the world. Dr. Sivaram is Acting Director of the Energy and Climate Change Program at Council on Foreign Relations. He discussed, the issues that must be resolved before Solar can become a mainstay in our society. Sivaram noted that creative financing, flexible energy systems and innovative technologies are needed to insure Solar Power as a future centerpiece for global clean energy. Speaker Varun Sivaram with Vice Chairwoman Carol Jaeger

On Tuesday, March 20, 2018, Randy Pestana spoke at the Colony Palm Beach to an overflow audience of World Affairs Council members and guests. He discussed the corruption and conflict that runs rampant today in Central America. Pestana presented details about the corrupt state that exists in Guatemala, Honduras, El Salvador, Nicaragua and increasingly in Costa Rica. Efforts are being made to rout out MS13 gangs but with limited success since the gang leadership has strong ties and influence with many government officials.

On Tuesday, April 10, 2018, the World Affairs Council of Palm Beach hosted Nicholas Papanicolaou at the Colony Palm Beach, Papanicolaou, Co-founder and Co-chairman of the World Peace Forum, spoke about the compatibility of Islam and the U.S. Constitution. He juxtaposed numerous examples of radical Islamic tenets against those stated in our American Constitutions â&#x20AC;&#x201C; radical tenets that would abolish the freedoms we cherish. Papanicolaou noted that above all Sharia Law places man-made laws above the Law of the Land.

Nicholas Papanicolaou, Co-founder and Co-chairman of the World Peace Forum,

The Leading Hotels of the World

Exciting hotels to check out in Europe!

Step into the classic story and walk thru foggy 1800â&#x20AC;&#x2122;s London. Hear wandering minstrels, smell holiday delights, and keep an eye out for Mr. Scrooge. Enjoy a festive reception, seated dinner, live entertainment and reunite with friends at this season opening gala. Reserve now to insure your seats for this holiday celebration.

For sponsorship opportunities or to inquire about committee membership and tickets please contact: Sean Davis at 561.702.5084 or e-mail: sean.davis@uss.salvationarmy.org

Dear Readers, Friends, and Supporters, What a whirl wind season we have had! Much has transpired in our enclave which has brought joy, culture and social awareness to our lives this social season. I wish to express my appreciation and thank you for your support, and am looking forward to working with you all next season. Until then, wishing you all, safe travels, as much adventure as you can handle....and much joy in your lives, as you experience the fruits of the summer, and live life to its fullest. Best Wishes,

Erté Illustration dated 1919 and used in the 1929 Encyclopedia Brittanica

Azzedine Alaïa, one of the greatest and most uncompromising designers of the 20th and 21st centuries, died on Saturday in Paris. He was 77.

“I dressed women directly on their body, by intuition. This is how I gained experience,” he once said. Mr. Alaïa dedicated his life to the belief that fashion was more than just garments; to him, they were as much an element in the empowerment of women and of a broader cultural conversation.

Vilda with her husband Mauricio Kazzi,Tony Bennett, and the late Mrs. Mary Trump

“My small luxury is Alaïa... for all his perfect dresses that cling to the body marvelously.” – Anne Benichou, Director of Communication and External Relations for the Ritz in Paris 1