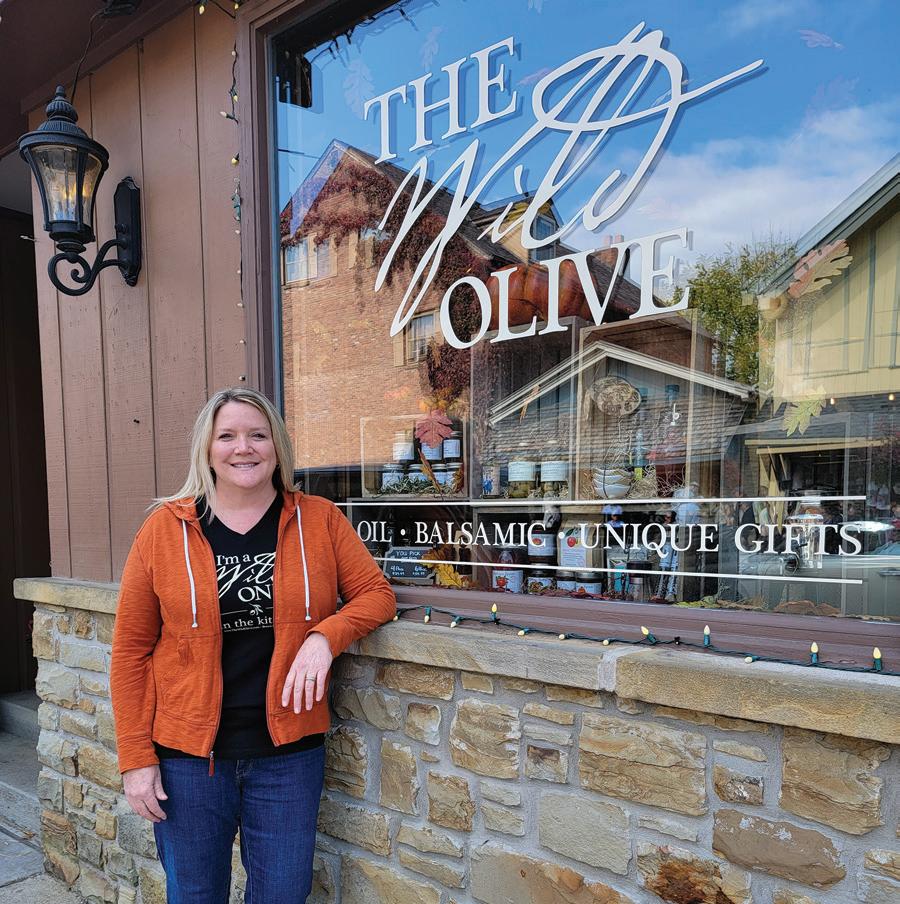 The Wild Olive
~story and photos by Bob Gustin

Holly Salo’s handmade pottery is an integral part of her involvement in the Brown County community. And that involvement continues to grow.

This year, in addition to being a part of the weekly Nashville Farmer’s Market, she was a guest artist on the annual Brown County Studio Tour, and will set up at the Christkindl Market in December. Samples of her work are for sale at the Brown County Historical Society’s gift shop and at the Brown County Visitors Center.

Some of her pottery is thrown on a wheel, some hand built.

“It’s very soothing, very meditative to be on the wheel,” she said, and she feels compelled to build. She also enjoys different glazes, design patterns, colors, and textures. “It’s a fulfilling part of it for me.”

Much of her work is done after research and testing, and she uses brushes to further the unique designs. The Salos bought a potter’s wheel while they lived in Columbus, and she used it in their garage. Now it sits in a central location, in a bright studio with lots of natural light. Three large kilns are contained in a nearby room. A separate gallery displays pottery.

Holly and her husband Damon, who have three adult children, moved to Brown County in 2017, and quickly constructed a large building to accommodate storage, a woodworking shop, Holly’s gallery and studio, and an accessory dwelling for Damon’s parents. Holly’s father lives in the basement of her home.

“We’re a family of caretakers,” Damon said. Holly grew up in Amherst, Mass. Art was always a passion for her, whether it was scrapbooking, painting, arranging flowers, or other arts and crafts activities. But she was particularly drawn to clay. Pottery was an important artistic outlet for her, depending on resources, time available and other activities. She met Damon, an Ohio native, when he was studying at an engineering school in Worchester, Mass. She was a friend of a friend of a roommate, he said. The couple married and moved to Hamilton, Ohio, to be closer to his family.

Then jobs at Cummins Inc. took them to Columbus, where he was an engineer and she worked in the human relations department. A reduction in force led Holly to devote more energy to pottery. Damon still works at Cummins.

Holly grew up in an area surrounded by mountains, and when they moved to the area, a trip to Nashville sold her on Brown County.

“I said, ‘This is the first thing I’ve seen in the Midwest that actually reminds me of home. We need to move here.’”

“Suddenly during COVID, I had time,” she said.

The store might mean cutting back on some shows and some custom orders. The Salos believe it will mean more efficient use of time, since heavy and fragile pottery requires lots of setup time at shows.

Holly said she will continue to do the Nashville Farmer’s Market, which helped her understand the Brown County community.

She will also participate in the Christkindl Market the first weekend of December, as she did last year. But be warned, she said, last year her specially designed ornaments sold out in the first 90 minutes. She has some special mugs prepared for this year’s market. Last year the weather was beautiful in early December, and the event featured craft booths, live music, Santa and Mrs. Claus, wine tasting, and other activities.

“Community is important because everyone needs to feel supported and a part of things. It’s an extension of how I feel about family,” she said. “Family is extremely important to me.”

Holly was chosen to produce the event’s official handmade wine cup this year.