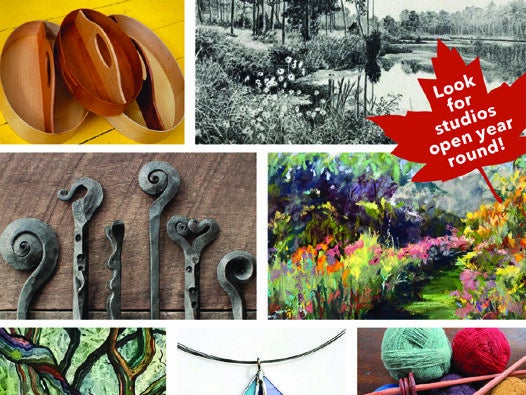 and the Back Roads of Brown County Studio Tour

Artist, poet and writer DeMaris Gaunt has lived in Brown County for only about three years, but her roots here run deep.

Long before she built her home and Mud Horse Art studio at 1515 Tanglewood Lane, she had connections to the unspoiled natural beauty and nurturing artist colony which characterize the area.

Her great-grandfather, Ora Chitwood, was a former Brown County sheriff and county commissioner who owned and developed land around what was to become Lake Lemon. And as a child, her father Charles Henderson, a builder and former mayor of Greenwood, brought the family on many trips to Nashville and Brown County State Park, particularly Ogle Lake.

“My dream in life was to be an artist and live in the woods,” she said.

Though she said she is still not “plugged in” to all of the local arts community, due partly to the lockdowns caused by the coronavirus last year, she looks forward to being a part of the Back Roads of Brown County Studio Tour, going on the whole month of October. The free, self-guided tour features 28 artists in 20 studios across the county.

Named after a childhood friend of her mother’s, DeMaris attended Herron School of Art and Design, and is divorced from caricature artist Paul Gaunt. Their son Will, 13, lives with DeMaris and is a budding artist himself. Her other children are Jayden, 28, who has a husband J.R., three children, and a degree in psychology from Purdue; and Isaac, 21, a junior at Florida Gulf Coast University, studying communications/acting.

Though her main source of income is her stained glass and pyrography (wood burning and colored pencil) creations, she has published a novel, Two Doors, and writes a poetry blog.

“Poetry is my counselor, my therapy. Everything dark and sad inside of me is released when I write poetry.”

She likens poetry to the “maple syrup of literature,” taking feelings, emotions, and events and boiling it down to its essence.

“You’re left with something powerful and meaningful,” she said.

Gaunt said she is equal parts visual artist and writer, which satisfy the same creative urge. But she knows she will never make a living off writing.

She began working with stained glass in 1994, while doing an internship at a stained glass studio in Greenwood. That inspired her and set her on a path of creativity.

She first worked from patterns, but said she soon abandoned that and now only does original designs.

“I only create from something I’ve drawn and designed myself,” she said, and that’s one of the luxuries of having her own home/studio. “I can evolve. I have a wonderful space to try new things and fail or have accomplishments.”

One of her accomplishments is a recent commission to make seven glass sculptures to be given as trophies in the Indiana Governor’s Art Awards.

Success has been a combination of luck and hard work, Gaunt said, along with inspiration, which can be hard to define.

She doesn’t know where the designs come from. Anything from random spilled liquid to the beauty of nature can lead to a new creation. “I’m drawn to visually impactful shapes and colors.

“It’s likely people get inspired by nature,” she said, because we’ve evolved to appreciate a landscape.” She also found inspiration in modern art and architecture during a recent visit to New York City. “I simply love to draw shapes, forms, and lines that are pleasing to the eye, and hope it’s pleasing to the beholder as well.”

Her studio name comes from a Native American children’s story called “The Mud Pony” she used to read to her daughter.

A poor young Native American boy wanted a pony so badly he made one out of clay. He loved it and cared for it as if it were real, and it helped him cope and survive after he was separated from his parents. One day, he woke up and the mud pony was gone, but a beautiful white horse was in its place. Together, he and his horse found their lost tribe, and later, the boy became a great warrior. The story ends with the boy grown up, the chief of his people. He believes his mud pony helped him achieve these great things, and he gives thanks to his spirit.

“It was a beautifully illustrated book and I loved the story. The family lore is that we are part Cherokee, and I’ve also always loved horses, so I decided to call my business Mud Horse Art.”

Her studio will be open 10 a.m.-4 p.m. every day in October except Mondays. Though many studios are open seven days a week, individual artists set their own times.

“It’s a wonderful way to meet people and connect,” she said. “You can tell them about what you do, and it’s fun.