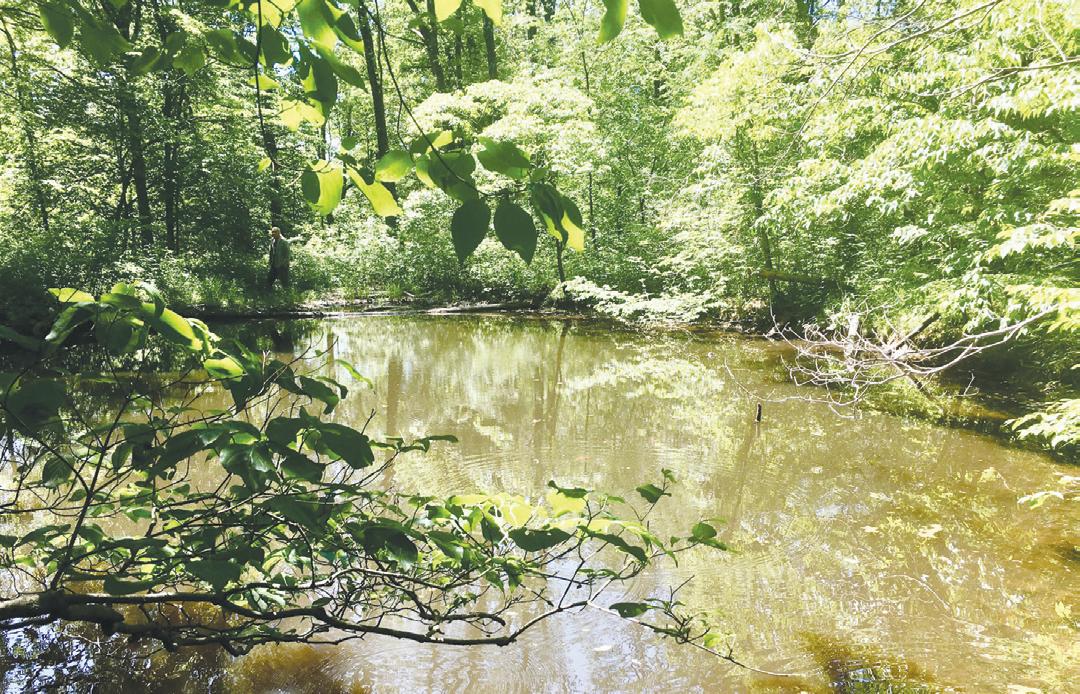 Growing up in a family of artists, Luke Buck remembers creating pictures from his earliest days.

“I thought everybody painted,” he says with a chuckle. He grew up in Indianapolis, where his father, mother, three brothers and a sister, as well as his grandmother, were also artists.

Now 79 and living on Prince’s Lakes, just north of the Brown County line, Luke and his wife Coleen spent years on the road, travelling to outdoor art shows all over the United States, before settling down at their lakeside home and Luke’s working art studio.

He figures he has completed about 5,000 paintings in his life, but now has slowed down to 40 or 50 a year. Still, he works at it every day.

“I guess I’m bullheaded,” he said, determined to pursue his lifetime passion.

Graduating from Arsenal Technical High School in Indianapolis in 1960, he immediately landed a job at Herff Jones Co., designing class rings and signet jewelry. His position as a commercial artist was one he kept for several years, interrupted by a stint in the U.S. Army, where he was an illustrator, working in Army intelligence. One of the projects he did for Herff Jones was the 1970 Super Bowl ring; Luke’s design was chosen for the game, but the company failed to win the contract to produce it.

They closed the studio in 1981, and soon after, Luke and Coleen hit the road. They traded in an old beat-up van and trailer on an RV, and travelled across the country, doing up to 25 juried art shows a year, following the sun north in the summer and south in the winter.

“You can’t open a gallery and expect people to come to you. You’ve got to go out and find them,” he said. “Outdoor art shows are the best venue for artists starting out.”

During these travels, Luke refined his style. Most people want to buy art which represents the area in which they live, he said, so he painted landscapes wherever he went, and supplemented those pictures with wildlife. It’s a formula he still keeps, with about half of his paintings now focused on landscapes.

“I found out I could make a living doing what I want to do,” he said. “As we travelled, my idea was to paint in every state.” Along the way, he hooked up with Mill Pond Press, one of the nation’s leading print makers. In addition to his original paintings, Luke sells limited edition giclee prints of some of his work, though he now contracts to have the prints made, since Mill Pond has gone out of business.

Though he works in several mediums, most of Luke’s paintings are watercolors, a medium in which he feels he has most control. He does some plein air paintings, but mostly works from photographs, and all of his landscapes are actual places.

“I am faithful to technical aspects of the paintings,” he said, “but I also want to give it some artistic flair.” To do that, he takes a realistic subject and adds some romanticism, making it more appealing.

A happy childhood is sometimes transferred to his artwork, as he puts emotions and memories into his work.

Among the things that make his work unique are the vignettes he paints as he lets watercolors run free at the bottom of some of his paintings.

“I call them vignettes because it sounds better than drippy-downy things,” he said, and he uses them on about half of his work. “It softens the work, makes it more interesting and less mechanical.”

He also presses a fingerprint into his work near the signature, a technique he borrowed from Salvador Dali.

Norman Rockwell and Andrew Wyeth were among his early influences, and in later years he worked with, influenced, and was influenced by contemporary artists he knew.

“Brown County is my heart,” he said, an association he has enjoyed throughout the years.

Luke’s father once advised him to paint, not to please others, but to please each artist’s toughest critic, himself. “Satisfy yourself with a painting. If you’re happy, others will be happy too.”