Jane Ellis and her Brown County 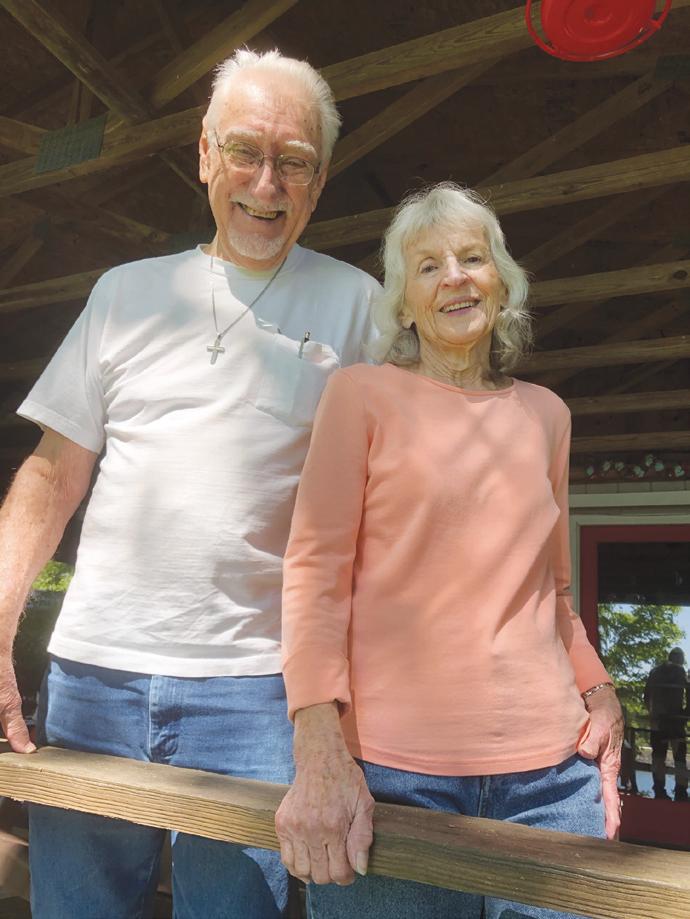 ”I realized that where I grew up was authentic, and people know each other here, and I wouldn’t want it any other way.”

As a favorite destination for visitors from all over, Brown County thrives on making thousands of people feel welcome each year. You won’t get far around here without seeing the smiles of our merchants and artists at work, hearing friendly conversations on our streets, or feeling the sense of connection our local outdoor beauty impresses upon us. But for Jane Ellis, Executive Director of the Brown County Convention and Visitors Bureau, welcoming people isn’t just a job—it’s part of who she is.

Not that she ever set out to someday head her community’s publicfacing tourism office. Jane grew up on thirteen acres of forest and farmland on Greasy Creek Road, with Nashville just a quick bike ride away. “It was the best of both worlds. I was a typical Brown County kid. I didn’t know about strip malls and department stores,” she says. “I thought everybody’s downtown was like Nashville’s.”

As captivating as Brown County was for her, like many youngsters Jane eventually had dreams of a change of scenery. A few months of living in Los Angeles after high school definitely fit the bill, but Jane says it just wasn’t for her. “It was eyeopening, and I started looking at things a little differently,” she recalls. “I realized that where I grew up was authentic, and people know each other here, and I wouldn’t want it any other way.”

Jane returned to Indiana, but it was still a decade before she came all the way back to Brown County, by then divorced and with two small daughters. “I realized I needed my family,” she says, “so I moved back. Then I started waiting tables, thinking about what else I would do to support myself.” One day at work, a little magazine called Our Brown County caught her eye, where Jane learned about the Brown County Visitors Center that had opened on North Van Buren Street during her time away.

Turns out they were looking for a manager at the Center at the time, and after applying, Jane got the job. “I thought, ‘Hey, this is pretty good, I could spend all day talking to people and talking about Brown County,’” she says. She used her time at work to hone her skills and increase her knowledge of the area, and spent her own time driving around Brown County to learn even more.

Jane quickly learned that her job was much more than giving out brochures and pointing tourists towards places to eat and shop. “There were no computers for people at the Visitors Center back then, we didn’t have a website. The printed Getaway Guide was our crown jewel at the time,” she says, so the staff had to rely on their own knowledge to answer questions. “People would call and expect us to know not just what was here, but which stores stocked what, so it was really involved.”

Within a few years, Jane was promoted to Interim Executive Director of the Brown County Convention and Visitors Bureau, the organization that oversees and operates the Visitors Center; in 2012, she was awarded the position permanently. For Jane, it was the ideal match. “I realized, I’m selling my community here,” she says. “I really like talking to people, and I get to talk about all the great things to see and do while they’re here.”

By 2018, the Visitors Center had moved a few blocks south on Van Buren Street to a beautiful new space, and plans were underway for the new Brown County Music Center. Everything was running along smoothly, until the COVID-19 pandemic hit in early 2020.

As Indiana began grappling with the lockdown that followed, Jane’s first impulse was to help the community she serves. She got on the phone and, along with other public, private, and nonprofit partners, helped form Brown County’s Community Organizations Active in a Disaster (COAD) response group. By leveraging the staff and resources of its member organizations—including the Convention and Visitors Bureau—COAD aims to respond directly to the human needs of the community in the wake of the global pandemic. “In a county like ours, we really do have to depend on each other, so we needed to help people fast,” Jane says.

And now, after most of the precautions and restrictions have been lifted, tourism is booming again, she says. “People want to get out of the house, and with our outdoor destinations, Brown County is made for social distancing. We’re coming back,” says Jane. “I look forward to the Music Center’s rescheduled shows, the rescheduled John Hartford festival, and the Blues festival.”

When I ask Jane to recommend a few more of Brown County’s not-to-bemissed experiences, she doesn’t hesitate: Bill Monroe Music Park, Browning Mountain, Farmhouse Cafe. Then she chuckles. “Those are just a few, though. I’m not giving away all of our best-kept secrets.”