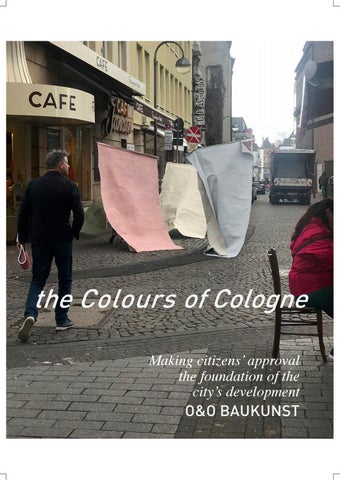 Parkstadt Süd the Cologne C a th ed r a l is 1,000 metres away Parkstadt Süd is Europe‘s largest urban development project in a comparable location within a city. Separate building complexes combine to create a whole comprising distinctive streets and squares. That is the principle of the European city, and it has proven itself to be the most liveable and vibrant model for urban life. By the time Parkstadt Süd is completed, 20 to 30 years will have passed. During the construction phase, a cultural project is to be undertaken to combat the rift that often forms between residents and planners. Under the aegis of a ‘Veedel-Baumeister’, or ‘district architect’, a series of artistic and informative performances and installations featuring the future city are planned.

What can be done to incorporate such a large area of new construction, something that is initially a foreign body, into the city, and how can we help the people of Cologne to take this project to heart? Christian Heuchel

People need someone who can define the rules for quality and take these decisions. That is what gave rise to the idea of introducing a ‘district architect’ for this new urban district, a city architect in miniature, so to speak. The ‘district architect’ is the ‘godparent’ to the project, the person with an overview of what is being created.

In the past, entire municipal systems were created in the colours of the materials that could be obtained within the local region. It is a phenomenon that we can still see today in well-maintained city districts built with reddish and yellowish bricks, as well as in the ‘black city’, Catania, which was built from the basalt stones taken from volcanic Mount Etna. Paris

The city rubs off on its citizens – this can be seen in what they eat, how they move, and in their attitudes. The Viennese are different than Berliners. Urban spaces in Paris demand grandezza. August Sander took photographs of the people of Cologne, and the character he captured continues to exist today. That is the city. Jodhpur

Oil lamps in the Romano-Germanic Museum in Cologne

It was clear to me that any search for the colours of Cologne would have to begin with the city’s history. I travelled to Cologne on Sunday morning. There was one room in the Romano-Germanic Museum that made a particularly strong impression on me. It is a room in which numerous oil lamps are hanging. I was completely surrounded by them. It was clear to me that I would have to research the locations in which these artefacts had been found, as well as the clay from which they had been fired. The idea is that we can take the earth, the sand and specific stones from the areas in which this clay was mined, and work with a professional paint company to create mixtures that really are the authentic colours of Cologne. The colours found here served as the basis for the entire appearance of the ancient Roman city.

It was from Dr. Trier, Director of the Romano-Germanic Museum, that we learned that throughout Cologne’s history, the people of Cologne have been shameless in their reuse of everything they could find, for building the new and rebuilding the old. Gravestones have been used as the foundations of manor houses, just as stones from these manor houses were in turn employed in the buildings of subsequent generations. The city has destroyed itself and then rebuilt using the materials deposited over the course of its history. It is a lesson that is more important than ever today, in an age where nothing is ever repaired, and rapid disposal is seemingly always the answer. That is because such reuse and continuity give rise to identity, a good that we are seemingly endlessly searching for. Now, as we plan Parkstadt Süd, the biggest area of new construction in the city and the future home to thousands of people, it is only appropriate that we imbue this new district with the emotional substance that is so abundant in the city’s roots.

It must be said that everyday life in the ancient city of Cologne was marked by the greys and browns of large stone buildings, structures that were primarily built using greywacke, trachyte and tuff. Objects made from clay were practically ubiquitous in the cityâ&amp;#x20AC;&amp;#x2122;s culture. These included not only the tableware for local markets and for export that was made by the cityâ&amp;#x20AC;&amp;#x2DC;s potteries from the Augustinian age onwards, but later also the small sculptures and oil lamps whose vivid imagery reflects the various facets of humanity: their everyday lives, environment, trade, religion, love, luxury and lifestyle. I began my experimentation with colour in my studio using these authentic oil lamps. I gave rough names to each of the colours that was created. Chamott, a reddish clay. Found in those places where people have taken finished items and smashed and ground them, only to reuse them. Kaolin, a light clay, almost pure yellowish-white, that can be found on ancient artefacts. Soot, burnt wood, ground down and mixed with chalk, gives rise to a palette of grey shades. And a greenish earth colour that is revealed in the ceramic glazing of numerous objects.

the C o l o u r s of Cologne When you are dealing with colours, it is best to ask the people who know them inside out, and that means artists. Kirsten Lampert is one of the best, and she teaches colour techniques at the Kunstakademie D ­ üsseldorf (Düsseldorf Academy of the Arts). She specialises in the impact of colour, and in colour’s manifestation in ­architecture. Urban development projects must send clear signals to a city’s citizens, as well as to its government: what form might this take? The question of colours arose with Kirsten Lampert, and suddenly we had ‘The Colours of Cologne’. ‘The Colours of Cologne’ satisfies the yearning to live in a distinctive environment in a very substantial way. It ameliorates the reservations that always arise when there is new construction. With our colour concept, we are able to take up the thread of history quite naturally, regaining a continuity that is so often lost nowadays with the rapid pace of our lives.

We will require auxiliary structures in order to create a one-to-one simulation of how this colour concept works. The intensity of the colours must be tested on site. Unconventional methods of making this happen will be found. It is a new horizon for the colour industry.

Using colour to communicate a concept and a plan

The living integration of the citizenry into an ongoing flow of information is indicative of a new concept for the composition of urban development. Change is to be presented in a way that addresses the senses. Buildings that are destined for demolition could be painted beforehand. The result: giant fields of colour that engender a yearning for what is to come, transforming the dreary process of demolition into a celebration. It is particularly important that the entire process be accompanied and given a positive hue: with exhibitions, events and artistic happenings. As part of an effort to set the scene, the old halls could be painted in the colours of Cologne. Colours here constitute a strategy for communication, for suggesting a mood. They are the means through which ongoing communication with citizens and the municipal authorities is to be pursued.

Sgraffito with stone inclusions in the colours of the oil lamps

Small embossed motifs can be found on the flat tops of the oil lamps: dolphins, ears of wheat, gladiators and erotic scenes. In this way, otherwise identical products are given their own individual stamp. A similar rule applies to buildings. Here, the entrance is the most important part. The ‘district architect’ is hoping for a great deal of variety within the same overarching scheme. Each component of the greater whole should possess more identity, more expressiveness and more recognisability. Each of the various construction materials being used exists in harmony with the colour concept. Particular attention has been paid to refining the tectonic elements of the façade: the front door, the coverings used in the entrance area, the windows and the metal appliqués.

If one wishes to maintain a city’s design over the long term, a position such as the ‘district architect’ is indispensable. The ‘district architect’ has a district manual. Chapter one: ‘The Colours of Cologne’. The following chapters: ‘The Lights of Cologne’, ‘The Texture of Cologne’ and ‘The Greenery of Cologne’. This architect is the person who accepts responsibility, and is the individual who is ready with answers and explanations. Exhibitions will be held to explain how the new district will be integrated into the urban space, history and topography of Cologne. The entire project will be broken down into smaller, comprehensible and attractive units and presented to the public.

Alleyways within the district

In Cologne, buildings large and small are mixed in a very special way. Various architectural epochs are represented side-by-side as a matter of course that creates a charming cityscape embodying both order and disorder simultaneously. The result: an almost playful interaction between a big-city atmosphere and local district feel.

View of the market hall from the green belt

the Colours of Cologne

is an architect, city planner and university lecturer. Heuchel has held a lectureship for art and architecture at the Kunstakademie Düsseldorf since 2000. He has been in charge of the O&amp;O Baukunst agency in Cologne since 2006, and has been the Managing Partner of the Cologne and Vienna locations since 2011. He was responsible for the completion of the NRW State Archive in Duisburg in 2014, and he has successfully overseen countless urban development and building projects in recent years.

is an artist who studied painting at the State Academy of Fine Arts Karlsruhe and then at the ­Kunstakademie Düsseldorf, where she has been working as an art assistant since 1990 and as a lecturer in the field of painting technique since 1998. Lampert has won numerous awards, including the Art Award given by the Kunststiftung Baden-Württemberg (Baden-Württemberg Art Foundation) in Stuttgart and the Bergischer Art Award from the Museum Baden in Solingen-Gräfrath.

Upon completion, Parkstadt Süd will be Europe’s largest inner-city urban development project. Farben Kölns (»Colours of Cologne«) is a communication medium in the guise of a newspaper that promulgates an urban design colour concept for the project, with the aim of involving the local population in the undertaking. The concept is based on a cultural and historical heritage dating back to the dawn of history – a concept that can be experienced by all and sundry through art installations in urban public venues. An example of how urban planning and the public interest can be reconciled through the medium of culture. 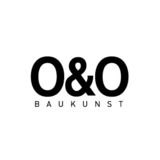