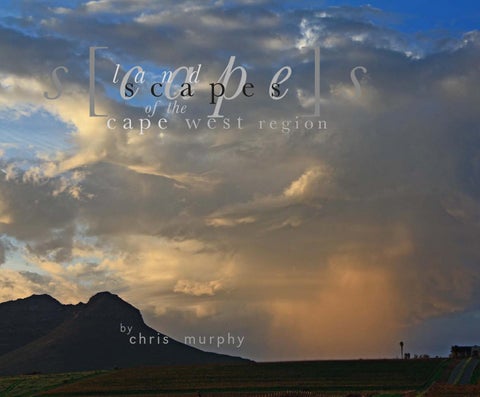 based in the swartland in the western cape, south africa, the landscape by and in which i am surrounded is my natural subject. the name ‘swart’ (black in afrikaans) is a misnomer – the land is anything but: ochres and yellows in autumn, vivid greens in winter, the rainbow in spring, and burnt earth textures of the hot summer . . . the coast is a place of extremely varied moods and modes. the moniker cape of storms was not lightly applied, yet the area can, to be perverse, delicately calm. travel with me through these scapes in which i have been blessed to live.

one of those times when north west storm clouds are being dissapated by the new south east wind, in the late afternoon.

sun rays breaking through a low cloud base near saron.

from the small pass on the riebeeksrivier road one can gaze, or as antoinette pienaar says, kyk, forever.

clouds reflected in the canal on the farm eikeboom near hermon made me think of a magritte painting.

eververscent clouds against the mountains. a lone tree struggling to compete.

do not enter, crossing on a disused railway line.

an old oak at allesverloren, changing into its autum livery.

paternoster beach with minimal colour. a small group of figures, intent. he pastel hues reminiscent of a victorian watercolour beachscape.

driving into the cederberg â&amp;#x20AC;&amp;#x201C; the dam provides a strange contrast to the harsh mountain environment you encounter when in the range.

a lone gum tree, struggling for survival in a sea of recently harvested wheat.

the west coast, near lamberts bay. a solitary figure huddled against the wind, a lone seagull struggling to keep aloft.

near vier-en-twintig-rievieren one evening â&amp;#x20AC;&amp;#x201C; a bakkie going home.

in the slanghoek valley the vineyards are set against hills which protrude against a dramatic mountain backdrop.

a jetty protruding into the cold sea.

the darliing hills, redolent in the setting sun.

a road. a big industrial farm. a huge mountain backdrop. a ray of light.

solo tree in a pale setting.

an old bridge passing autimn hues along the berg river.

a patch of sunlight on a yellow field.

a canal runs parallel to the johannesburg rail line.

last light of the sun in the tankwa karoo.

clanwilliam dam with the majestic cederberg behind.

stone sentinels in the sandved.

kasteelberg on a wintry day.

ruins of a farm at papkuilsfontein.

the northern ridge of the piketberg in the late afternoon.

a surviving tree in an newly ploughed field.

on the way home, the last rays of the sun picking out a farm complex.

in the winter when the winterhoek mountains are covered in snow, the land is green with growth.

arriving at elands bay one early evening. the sun was low on the horizon , throwing orange at the view, and looking across verlorenvlei i could just make out the distant cederberg.

a cloud over saron.

a laden day, awaiting the promise of rain.

after a heavy winter shower the air clears.

delivering, at sunset on a saturday when most are relaxing, away from the sunset.

the road to the paardeberg.

stormy seas of the west coast.

the hills and mountains near koringberg â&amp;#x20AC;&amp;#x201C; the single row of trees made me think of tuscany.

lightning connects to the heuningberg.

a patch of light escapes the laden clouds to strike the mountain.

a south east wind lurks through the valley

travelling through the cederberg, down a valley with a ruined farmhouse when this solitary white cloud appeared in a clear blue sky.

hazy, dissipated light over the heuningberge.

a patch of sunlight on a yellow field.

windpump, dammetjie and the paardeberg.

verlorenvlei, leading to the sea. a tree guards this precious resource.

the road to kasteelberg.where my heart lies.

A selection of scapes (land, sea, tree, mountain) of the south western region of South Africa.