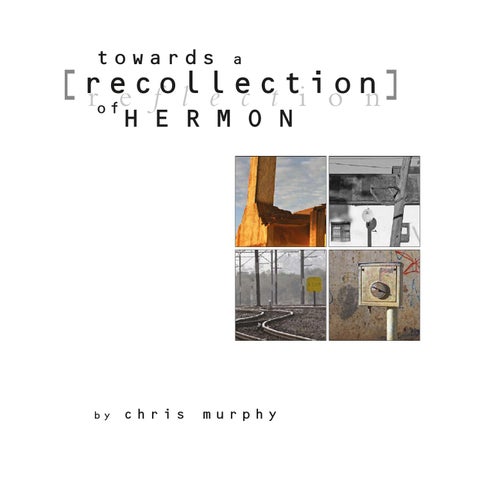 Dedicated to Tracey Derrick, with whom I conspired to host a Domino Tournament , called The Domino Effect, as part of a project 2010 Reasons to Live in a Small Town, funded by the Visual Arts Association of South Africa (VANSA). This book was a result of observations made in and around the village of Hermon during the course of preparing for the event. © Chris Murphy www.christopherjphoto.com www.traceyderrick.co.za www.vansa.co.za

The Domino Effect – Hermon, Western Cape, South Africa Tracey Derrick and Chris Murphy Working with the separated past of the village of Hermon - which continues to manifest in the present – Tracey Derrick and Chris Murphy planned to establish the Hermon Domino Tournament in partnership with the local community. The project also involved the erection of large-scale domino sculptures in the tournament play area, as well as public photographic displays in commemoration of the event and history of the village. Tracey Derrick has been a full-time portrait and documentary photographer since 1991. Her projects are primarily concerned with social and community issues. In 2009 she completed her Postgraduate Diploma of Art at the Michaelis School of Fine Art. Chris Murphy has extensive experience as a graphic designer in London and Cape Town, and studied at both Ruth Prowse School of Art in Cape Town and Ealing College in London. Reproduced from the VANSA website

It appears that when Rondeheuwel, was surveyed in 1833 a Huis en Ordonnantie (house and ordinance) was already on the farm, which was later sub divided to create the village of Hermon.

Hermon is actually two villages, classically divided in the South African context, here emphasised by a major road. One side is the remnants of a Dutch Reformed n d evibrant h e u wrail el Mission village, the other the residue of R a oonce junction where local farmers came to offload and â&amp;#x20AC;&amp;#x2DC;kuierâ&amp;#x20AC;&amp;#x2122;. H E R M O N

To reinforce the two aspects to the village: Eurocentric, and a rail hub . . .

A house, part of which has been demolished to allow for a new road. And satellite television dish.

Lion pens. In an age of eco-consciousness it is appalling to contemplate that lions were captive in these tiny spaces. Yet people came from afar to observe.

Described as a village lost in the 19th century, it remained so, until recently, when a low cost housing solution was imposed on the historical aspect.

The train arrives, 18.40. Passengers disembark. Many in the vicinity commute to the Cape â&amp;#x20AC;&amp;#x201C; two hours each way, and connection time at the ends. Something like five hours of every day, just travelling.

Schoolkids. Commuting to the local school.

This elderly couple lived in shocking conditions, yet retained their dignity and dressed for Sunday service at church. The gentleman, well into his 80s he told me, still collected firewood every day for cooking and warmth.

The house in which the couple resided, no water, nor electricity, cooking inside the tiny abode in winter.

A stand pump, water supply in the 21st century.

Bones, dumped on the land, superfluous residue of a consumer society.

The old barn on Rondeheuwel, home to various homeless people.

THE CARE OF THAT WORDS I&#39;m waiting 4 the truth By believing that love is worth waiting for Regaddles of my past To make a commmitment to myself for my futer spoused My futer children to be safely opstonet This day forever

till the day I enter to marry

I will avoid all activities

tha can lead me to the under meaning

A sad, desperate plea for acceptance, forgiveness, for sins committeed and likedly to be perpetrated; a forlorn hope of making amends.

The children are unaffected by death, perhaps with that spirit of youth when life seems infinite. One spoke blithely of his ouma en ma lying side by side in the graveyard.

A book, found; licence disc, remanat of the farm Rondeheuwel still being a viable entity; a rose, hope.

A series of images gathered of a small town, Hermon, in the Western Cape, South Africa.