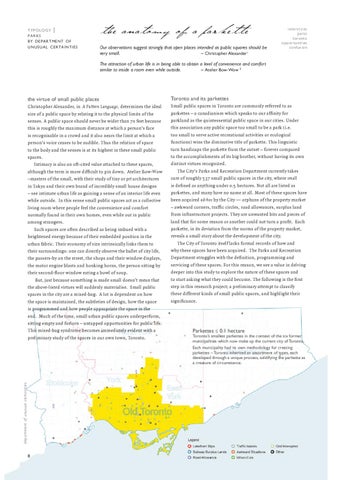 t h e a n a t omy of a parke tte Our observations suggest strongly that open places intended as public squares should be very small. – Christopher Alexander1

The attraction of urban life is in being able to obtain a level of convenience and comfort similar to inside a room even while outside. – Atelier Bow-Wow 2

Toronto and its parkettes

Christopher Alexander, in A Pattern Language, determines the ideal size of a public space by relating it to the physical limits of the senses. A public space should never be wider than 70 feet because this is roughly the maximum distance at which a person’s face is recognisable in a crowd and it also nears the limit at which a person’s voice ceases to be audible. Thus the relation of space to the body and the senses is at its highest in these small public spaces. Intimacy is also an oft-cited value attached to these spaces, although the term is more difficult to pin down. Atelier Bow-Wow –masters of the small, with their study of tiny or pet architectures in Tokyo and their own brand of incredibly small house designs – see intimate urban life as gaining a sense of an interior life even while outside. In this sense small public spaces act as a collective living room where people feel the convenience and comfort normally found in their own homes, even while out in public among strangers. Such spaces are often described as being imbued with a heightened energy because of their embedded position in the urban fabric. Their economy of size intrinsically links them to their surroundings: one can directly observe the ballet of city life, the passers-by on the street, the shops and their window displays, the motor engine blasts and honking horns, the person sitting by their second-floor window eating a bowl of soup. But, just because something is made small doesn’t mean that the above-listed virtues will suddenly materialise. Small public spaces in the city are a mixed-bag. A lot is dependent on how the space is maintained, the subtleties of design, how the space is programmed and how people appropriate the space in the end. Much of the time, small urban public spaces underperform, sitting empty and forlorn – untapped opportunities for public life. This mixed-bag syndrome becomes immediately evident with a preliminary study of the spaces in our own town, Toronto.

Small public spaces in Toronto are commonly referred to as parkettes – a canadianism which speaks to our affinity for parkland as the quintessential public space in our cities. Under this association any public space too small to be a park (i.e. too small to serve active recreational activities or ecological functions) wins the diminutive title of parkette. This linguistic turn handicaps the parkette from the outset – forever compared to the accomplishments of its big brother, without having its own distinct virtues recognized. The City’s Parks and Recreation Department currently takes care of roughly 537 small public spaces in the city, where small is defined as anything under 0.5 hectares. Not all are listed as parkettes, and many have no name at all. Most of these spaces have been acquired ad-hoc by the City — orphans of the property market – awkward corners, traffic circles, road allowances, surplus land from infrastructure projects. They are unwanted bits and pieces of land that for some reason or another could not turn a profit. Each parkette, in its deviation from the norms of the property market, reveals a small story about the development of the city. The City of Toronto itself lacks formal records of how and why these spaces have been acquired. The Parks and Recreation Department struggles with the definition, programming and servicing of these spaces. For this reason, we see a value in delving deeper into this study to explore the nature of these spaces and to start asking what they could become. The following is the first step in this research project; a preliminary attempt to classify these different kinds of small public spaces, and highlight their significance.

the virtue of small public places

Toronto’s smallest parkettes in the context of the six former municipalities which now make up the current city of Toronto. Each municipality had its own methodology for creating parkettes – Toronto inherited an assortment of types, each developed through a unique process, solidifying the parkette as a creature of circumstance.

Let us look at small things. Modest, but important things; little, but beautiful; small of budget, slender of means. Things that are slight in scale, intense in impact. We’ve recently seen the crash of grande capitalisme and its struggling return. This has, perhaps, made us think a bit more about an architecture of intimacy, of personal attachment, of close attention. 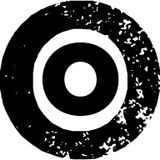