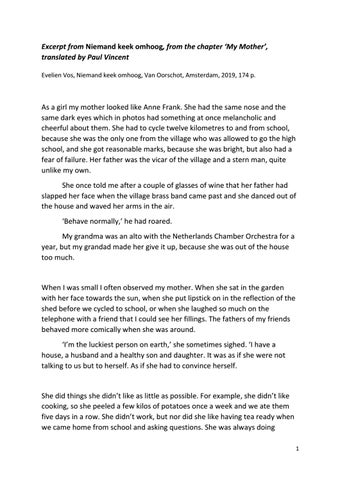 As a girl my mother looked like Anne Frank. She had the same nose and the same dark eyes which in photos had something at once melancholic and cheerful about them. She had to cycle twelve kilometres to and from school, because she was the only one from the village who was allowed to go the high school, and she got reasonable marks, because she was bright, but also had a fear of failure. Her father was the vicar of the village and a stern man, quite unlike my own. She once told me after a couple of glasses of wine that her father had slapped her face when the village brass band came past and she danced out of the house and waved her arms in the air. ‘Behave normally,’ he had roared. My grandma was an alto with the Netherlands Chamber Orchestra for a year, but my grandad made her give it up, because she was out of the house too much.

When I was small I often observed my mother. When she sat in the garden with her face towards the sun, when she put lipstick on in the reflection of the shed before we cycled to school, or when she laughed so much on the telephone with a friend that I could see her fillings. The fathers of my friends behaved more comically when she was around. ‘I’m the luckiest person on earth,’ she sometimes sighed. ‘I have a house, a husband and a healthy son and daughter. It was as if she were not talking to us but to herself. As if she had to convince herself.

She did things she didn’t like as little as possible. For example, she didn’t like cooking, so she peeled a few kilos of potatoes once a week and we ate them five days in a row. She didn’t work, but nor did she like having tea ready when we came home from school and asking questions. She was always doing 1

something with the hedge or in the library, where she read to women with reading difficulties, to make a difference. At supper my father sometimes asked my brother and me questions about school and football and ballet and my mother pretended to listen, but actually her mind was on other things. On the neighbours cycling past, on how my brother and I held our knives and forks, on the headlines in the NRC Handelsblad and how my father ate his iceberg lettuce. She got into a stew about the latter every evening. At such moments my father just sighed for a second and then he went on gamely eating, while I tried to hear exactly what my mother meant.

We sat on a small terrace in the winter sunshine, on a square full of gravel that slopes downwards and where clouds of dust hang when children are playing football. Dario put on a pair of sunglasses that looked as if he had got them with a six pack of cola and told us that he had googled ‘being cheated on’. ‘I shall go through various phases,’ he said. A thick-set man of about sixty came out and took our order. ‘Probably,’ I said. I put my hand on his for a moment and wished I could see his eyes. We said nothing for a while. A black greyhound came past our table and stopped. Dario stroked him intently on his muzzle and under his head and with his other hand he held the dog’s jaw shut and shook it to and fro a little. The dog wagged its tail and Dario seemed to be alone with the dog. A woman with red hair on the other side of the square whistled to the dog and he ran towards her. ‘So long, that makes a difference though,’ said Dario. He put his sunglasses on the table and looked at me. 2

‘And with you I always knew it was going to happen sometime. I couldn’t die without going to bed with you.’ ‘That’s the same thing, isn’t it?’ He shook his head. ‘No, I don’t think it is.’ I put my collar up a little and watched as he sat there with his hands in his pockets. Perhaps he was holding a stone of a chestnut. ‘What’s a relationship then, in your view?’ He looked at me out of the corner of his eye, without moving his head. ‘No, seriously,’ I said. ‘I have ideas, but I don’t know what it’s like, so that doesn’t count. ‘I don’t know either,’ he said. ‘This was one, but there are countless other conceivable combinations.’ ‘But when is it right?’ I went on. He shrugged his shoulders. ‘When it feels right.’ ‘I’ve never known that then,’ I said. The waiter came out again and looked at his chit, as if checking who the drinks were for, though we as always were the only customers. Normal people work during the day. In her debut Niemand keek omhoog (No one looked up) Evelien Vos (b. 1987) recounts the seemingly banal life of her character, Lucy. But unde...

In her debut Niemand keek omhoog (No one looked up) Evelien Vos (b. 1987) recounts the seemingly banal life of her character, Lucy. But unde...