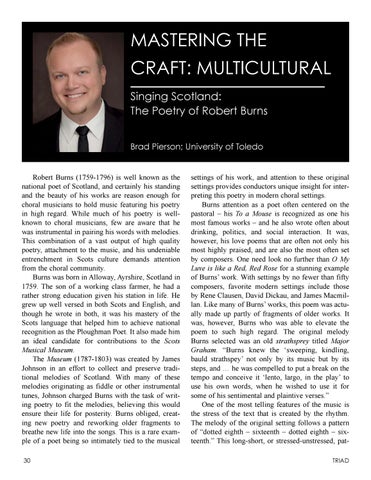 MASTERING THE CRAFT: MULTICULTURAL Singing Scotland: The Poetry of Robert Burns Brad Pierson; University of Toledo Robert Burns (1759-1796) is well known as the national poet of Scotland, and certainly his standing and the beauty of his works are reason enough for choral musicians to hold music featuring his poetry in high regard. While much of his poetry is wellknown to choral musicians, few are aware that he was instrumental in pairing his words with melodies. This combination of a vast output of high quality poetry, attachment to the music, and his undeniable entrenchment in Scots culture demands attention from the choral community. Burns was born in Alloway, Ayrshire, Scotland in 1759. The son of a working class farmer, he had a rather strong education given his station in life. He grew up well versed in both Scots and English, and though he wrote in both, it was his mastery of the Scots language that helped him to achieve national recognition as the Ploughman Poet. It also made him an ideal candidate for contributions to the Scots Musical Museum. The Museum (1787-1803) was created by James Johnson in an effort to collect and preserve traditional melodies of Scotland. With many of these melodies originating as fiddle or other instrumental tunes, Johnson charged Burns with the task of writing poetry to fit the melodies, believing this would ensure their life for posterity. Burns obliged, creating new poetry and reworking older fragments to breathe new life into the songs. This is a rare example of a poet being so intimately tied to the musical 30

settings of his work, and attention to these original settings provides conductors unique insight for interpreting this poetry in modern choral settings. Burns attention as a poet often centered on the pastoral – his To a Mouse is recognized as one his most famous works – and he also wrote often about drinking, politics, and social interaction. It was, however, his love poems that are often not only his most highly praised, and are also the most often set by composers. One need look no further than O My Luve is like a Red, Red Rose for a stunning example of Burns’ work. With settings by no fewer than fifty composers, favorite modern settings include those by Rene Clausen, David Dickau, and James Macmillan. Like many of Burns’ works, this poem was actually made up partly of fragments of older works. It was, however, Burns who was able to elevate the poem to such high regard. The original melody Burns selected was an old strathsprey titled Major Graham. “Burns knew the ‘sweeping, kindling, bauld strathspey’ not only by its music but by its steps, and … he was compelled to put a break on the tempo and conceive it ‘lento, largo, in the play’ to use his own words, when he wished to use it for some of his sentimental and plaintive verses.” One of the most telling features of the music is the stress of the text that is created by the rhythm. The melody of the original setting follows a pattern of “dotted eighth – sixteenth – dotted eighth – sixteenth.” This long-short, or stressed-unstressed, patTRIAD 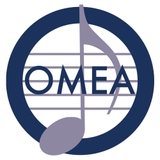