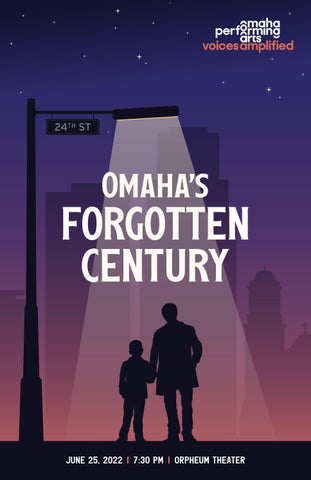 If stories aren’t shared, it’s like they never happened. Omaha’s Forgotten Century tells the story of Omaha’s Black and Latino heritage through the eyes of young Ernie and his Grandpa Apa. Ernie has been tasked with creating a play about his family’s history, and there’s no one who tells stories like his Apa. Apa even tells the parts most grown-ups don’t…or won’t. Omaha’s Forgotten Century is the finale performance of Omaha Performing Arts’ (O-pa) 21/22 Voices AMPLIFIED! season. The original dance/theater production was commissioned by O-pa and brought to life by a team of community members. The actors are from Omaha, and the dancers are based in New York.

Ray Mercer Creative Director &amp; Choreographer An Omaha native, Broadway actor, dancer and choreographer in his 17th year as a dancer and fight captain in Disney’s The Lion King

Peggy Jones Scriptwriter Associate Professor at UNO and past Interim Chairperson of the Black Studies Department, and a member of the Graduate and Women’s and Gender Studies faculty and the Nebraska Humanities Council Speakers Bureau

D. Kevin Williams has been developing his professional and instructional craft in the dramatic arts for over 35 years. His performance credits range from local and regional commercial appearances at 12 years old, to performing radio and television voice overs. Most notably is the Emmy nominated animated children’s series Liberty’s Kids, the Nebraska and North Carolina Shakespeare Festivals and the film For Love of Amy. He has also toured with the National Broadway Company of The Color Purple.

Artie Shaw attends Omaha Central High School and started acting in church at Salem Baptist Church in Easter and Christmas productions. He has participated in school plays and musicals at The Rose Theater. He has played Malchus, an Angel, and Peter for his church, Commedia dell’ Arte in The Actor Games, Bert in Good News, Hansel in A Princess with No Name, Joel March in A Family Reunion to Die For, Jimmy Biggs in The Battle of Boat, the Boss in 7 Ways to Say I Love You, and Eric in Matilda: The Musical.

Voices AMPLIFIED! is a thematic series that elevates artists from diverse cultures and celebrates their work through live music, dance, spoken word and visual arts. Join us for the 22/23 Voices AMPLIFIED! season. All events are free and open to all.

(times and locations to be announced)

Salsa and Jazz: A Mixing of Musical Flavors

Learn about the life of the influential Doña Perón and how her story is told by Ballet Hispánico.

Panel discussion on the influence of salsa and the musical traditions of Latin America.

Omaha Fashion Arts Collective showcases some of the best local Latino talent in the Fashion industry.

Learn how Latino artists are helping to transform their communities through often underestimated art forms.

This panel discussion will uncover the history and impact of Cuban music, featuring the music and musicians of the Chucho Valdéz Quartet.

A day-long music and arts celebration of the global village of South Omaha cultures. In partnership with Canopy South.

21/22 Echoes A continuation of our work from previous seasons

A panel discussion on the positive image created by Black male choreographers and dancers.

An inspirational Q&amp;A with the prolific jazz musician and the first African American composer to be staged by the Metropolitan Opera.

See the incredible touring artists participating in Voices AMPLIFIED! Get your tickets! ticketomaha.com | 402.345.0606

Many Thanks Sponsors and Community Partners

Find us online at o-pa.org

Join us for the premiere of Omaha’s Forgotten Century, an original production about the stories and dances that weave a family, build a neighborhood and change a city. This 60-minute dance-theater performance was commissioned by Omaha Performing Arts as part of the Voices AMPLIFIED! series and brought to life by a team of community members. Experience music, dance, heartbreak and joy as young Ernie and his grandpa Apa share stories spanning 100 years of North and South Omaha history.