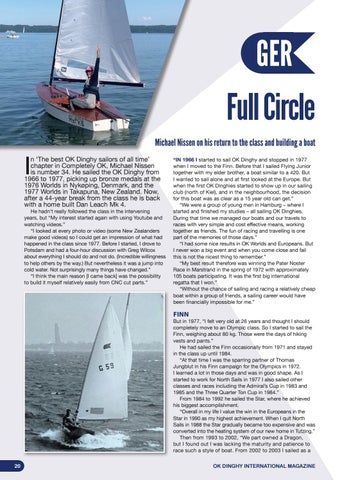 n ‘The best OK Dinghy sailors of all time’ chapter in Completely OK, Michael Nissen is number 34. He sailed the OK Dinghy from 1966 to 1977, picking up bronze medals at the 1976 Worlds in Nykøping, Denmark, and the 1977 Worlds in Takapuna, New Zealand. Now, after a 44-year break from the class he is back with a home built Dan Leach Mk 4.

He hadn’t really followed the class in the intervening years, but “My interest started again with using Youtube and watching videos.” “I looked at every photo or video (some New Zealanders make good videos) so I could get an impression of what had happened in the class since 1977. Before I started, I drove to Potsdam and had a four-hour discussion with Greg Wilcox about everything I should do and not do. (Incredible willingness to help others by the way.) But nevertheless it was a jump into cold water. Not surprisingly many things have changed.” “I think the main reason [I came back] was the possibility to build it myself relatively easily from CNC cut parts.”

“In 1966 I started to sail OK Dinghy and stopped in 1977 when I moved to the Finn. Before that I sailed Flying Junior together with my elder brother, a boat similar to a 420. But I wanted to sail alone and at first looked at the Europe. But when the first OK Dinghies started to show up in our sailing club (north of Kiel), and in the neighbourhood, the decision for this boat was as clear as a 15 year old can get.” “We were a group of young men in Hamburg – where I started and finished my studies – all sailing OK Dinghies. During that time we managed our boats and our travels to races with very simple and cost effective means, working together as friends. The fun of racing and travelling is one part of the memories of those days.” “I had some nice results in OK Worlds and Europeans. But I never won a big event and when you come close and fail this is not the nicest thing to remember.” “My best result therefore was winning the Pater Noster Race in Marstrand in the spring of 1972 with approximately 105 boats participating. It was the first big international regatta that I won.” “Without the chance of sailing and racing a relatively cheap boat within a group of friends, a sailing career would have been financially impossible for me.”

But in 1977, “I felt very old at 26 years and thought I should completely move to an Olympic class. So I started to sail the Finn, weighing about 80 kg. Those were the days of hiking vests and pants.” He had sailed the Finn occasionally from 1971 and stayed in the class up until 1984. “At that time I was the sparring partner of Thomas Jungblut in his Finn campaign for the Olympics in 1972. I learned a lot in those days and was in good shape. As I started to work for North Sails in 1977 I also sailed other classes and races including the Admiral’s Cup in 1983 and 1985 and the Three Quarter Ton Cup in 1984.” From 1984 to 1992 he sailed the Star, where he achieved his biggest accomplishment. “Overall in my life I value the win in the Europeans in the Star in 1990 as my highest achievement. When I quit North Sails in 1988 the Star gradually became too expensive and was converted into the heating system of our new home in Tutzing.” Then from 1993 to 2002, “We part owned a Dragon, but I found out I was lacking the maturity and patience to race such a style of boat. From 2002 to 2003 I sailed as a 20 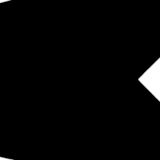