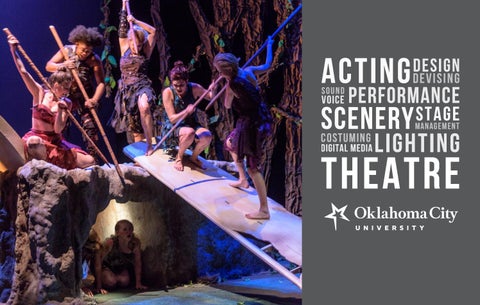 Cover Image: Lord of the Flies

Auditions &amp; Interviews How to Audition/Interview

on campus auditions and interviews • • • •

All programs do not audition or interview at all events. For more information please visit

How to apply to the university

Talent scholarships are available to incoming freshman and transfer students based on auditions/ interviews.

training you to be a working professional

The BA is the MOST flexible Theatre degree, giving you 45 elective hours to design your own track, in addition to a broad overview of all areas of theatre.

STUDY ABROAD Are you interested in seeing more of the world? The BA has the flexibility to enable a full semester abroad at one of our partner institutions in the UK or throughout Europe.

The BA is centered around the concept of devising or the collaborative process of creating theatre. Create new work using a variety of traditional and emerging theatre technologies and develop your own artistic voice.

SOCIAL JUSTICE &amp; EDUCATION The BA will prepare you to become a future leader in the use of theatre as a medium for social justice and community development. Theatre for Social Change and Praxis: Performance Theory &amp; Practice are just two classes unique to the BA that will give you the tools to effect change in the world.

THEATRE MINORS Round out your theatre education with one or more of our minors in -Directing -Children’s Theatre -Design &amp; Production

within Theatre or other programs

The Page: A Social Media Experiment

Pre-Law / Pre-med studies Follow us on Love and Information

land jobs in their field within

Advised Pathways for the Management track:

OUT OF THE BOX

The School of Theatre typically offers a four show Mainstage season, alongside an additional four opera/music theater productions in conjunction with the Wanda L. Bass School of Music. The mainstage season is a mix of fully realized productions of theatre classics and relevant contemporary plays, as well as co-productions with our professional partners.

The Stage II season presents six to eight productions per year in the intimate setting of our Black Box Theatre. Stage II plays are produced with an emphasis on acting and directing with the support of design, stage management, and technical elements. The season is a combination of student and faculty directors and designers who collaborate together on these experimental, laboratory productions.

Out of the Box is our student-run and student-organized theatre company. Every semester, three plays, ranging from reimagined classics to plays written by current students, are chosen and produced with student directors and actors. Out of the Box also produces the OCU Improv Troupe which holds frequent late-night comedy shows throughout the year.

My Dearest Partner of Greatness October 7 - 10

OCUEdge is a series of four staged readings throughout the year produced by Out of the Box. All readings are student acted and directed, with a focus on fresh, contemporary work. Most Edge productions have been written within the last five years, giving students a chance to experience new work every semester and become familiar with up and coming playwrights.

Stripped is a student-run organization that mounts two musical productions every year. The studio productions are fully staged and memorized but “stripped” down to the storytelling essentials. Staged in two weeks, these productions provide a unique production experience for OCU students.

The Oklahoma City Ballet has been the city’s professional ballet company since 1972 and is currently the resident dance company of the Civic Center Music Hall.

Study Abroad offers you the chance to satisfy your intellectual and creative curiosity while expanding your life experiences in a new culture.

There are multiple opportunities for students to study abroad during their time at OCU. The School of Theatre has established study abroad exchanges with universities across the UK and Central Europe.

“Being immersed in cultures besides my own has taught me so much about life and about people, which enhances my artistic skills in ways that are invaluable to my education.”- Mary Taylor

NEW YORK CITY The Wanda L. Bass School of Music and School of Theatre bring a casting director and agent from New York to audition all of our graduating seniors. Those chosen for the showcase spend the spring semester rehearsing a one-hour performance featuring songs and scenes. Those students travel to New York to perform in front of casting directors, talent agents, producers, and other industry professionals.

CHICAGO The School of Theatre invites a half dozen casting professionals (casting directors, agents, artistic directors) from prominent Chicago area theatres to campus. Our graduating seniors meet with, audition for, take workshops from, and get personalized feedback from these guests. Thus, when they arrive in Chicago, our actors are on a first-name basis with a large number of important industry professionals.

The School of Theatre partners with a number or prominent casting authorities from Dallas for extensive workshops and auditions for the graduating seniors.

for our students with leading

How we prepare you for your future INTERVIEWS

OUR GOAL is to

help you become a

In your senior year, each program has a class tailored to preparing you for your next step after college. These courses encourage you to develop, explore, and promote your professional identity as you navigate your entrance into the performing arts industry.

“I wanted a program that set their students up for success post-graduation and OCU has done just that for me. The opportunities I have had as a student to make connections with established members of the industry are more than I could have hoped for.” -Mercedes, BFA Acting ‘19

Schedule a campus visit at okcu.edu/visitors

and join the conversation!

Oklahoma City Our campus sits in the heart of OKC in the historic and vibrant Uptown District. Just a short drive, walk, or bike ride from campus you can explore more than a dozen diverse neighborhoods and entertainment districts featuring live music venues, local restaurants, coffee shops, food trucks, farmers markets, art events and cultural performances. On any given night you may find yourself dining at one of the local hotspots in Automobile Alley or Deep Deuce, enjoying a festival in the Plaza District or Midtown, appreciating one of the many art galleries in the Paseo Arts District, attending a professional sporting event, catching a local or nationally touring show at the Civic Center Music Hall or the Lyric Theatre of Oklahoma, playing laser tag in the Bricktown Entertainment District, or taking a stroll by beautiful Lake Hefner. 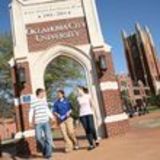