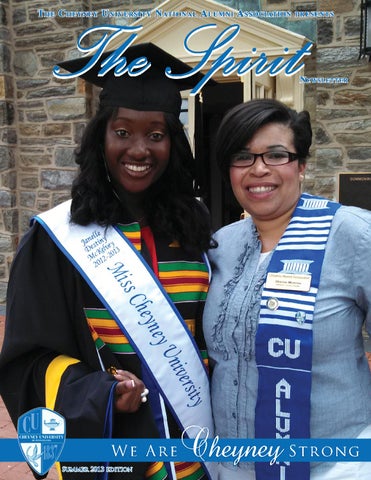 Homecoming Save the Date

and Director of Enrollment Management, Dr. Eric Hilton to discuss how enrollment rates relate to the accreditation requirements set by the Middle States Commission on Higher Education.

Skudzinskas shared the University’s plan to improve customer service to students by reducing the amount of roadblocks students face during the admissions and financial aid processes. Dr. Hilton said the new position will help Cheyney increase The Vice President said that the retention rates by providing objective is to make Cheyney students with a “one-stop shop” The Cheyney University University better by providing of specialized assistance from National Alumni Association is excellent service that will aid the moment they step on pleased to report that numerous Cheyney Alumni participated in Alumni Weekend 2013 “An AllClass Reunion” on May 3-5. On Saturday, May 4, the CUNAA hosted its general membership meeting which featured two members of the Cheyney University of Pennsylvania administration. CUNAA invited Cheyney University’s Vice President of Finance and Administration, Alan Skudzinskas, to discuss the University’s $14 million debt 4

campus. These changes, combined with the new “Destination Cheyney” initiative should allow the university to continue to experience growth and reach its goal of attracting confident and competent students interested in contributing to the HBCU’s 176-year-old legacy. CUNAA President Junious Stanton, Class of 1969, said, “The Executive Board thanks Mr. Skudzinskas and Dr. Hilton for providing such a thoughtprovoking dialogue.”

hall meeting at Cheyney University to discuss the Council of Trustees’ mandate to submit a balanced budget for the 2013-2014 fiscal year. Skudzinskas shared the Trustees’ concern that the projected full-time equivalency of 1,342 was too high. It was explained that if the University kept the FTE at the same rate it was for 2012-2013 (1,261), the University would have to cut an additional $600,000 from the budget.

situation for everyone, especially since enrollment decreased during the last fiscal year. Dr. Howard-Vital explained that Cheyney University generates revenue through tuition and fees, grants, Title III, and fundraising and that these sources of revenue must be employed to address University expenses.

At the beginning of May, 43 individuals were laid off. According to the administration, the budget cuts were done strategically to support the core CU President Michelle Howard- of the University, which is the On May 23, Vice President Vital explained that balancing faculty, students, and student support services. Skudzinskas convened a town the budget was a very difficult Last fiscal year, personnel made up 80 percent of the University’s expenses. During the town hall meeting, Dr. Howard-Vital listened to comments from attendees and staff members who had received furlough letters and acknowledged their concerns. It’s expected that each department will write letters to express how the cuts have affected them.

The Class of 1963 was reunited on Saturday, May 18 at Cheyney Universityâ&#x20AC;&#x2122;s Commencement program. Although clouds were hovering in the skies, the reunion began in a sunny mood as old friends were reunited in the Burleigh Hall conference room.

procession toward the Commencement ceremonies. Following Alumni Director Gregory Benjamin â&#x20AC;&#x2DC;81, the Class lead the procession of the President, Deans, Vice Presidents and other members of the Cheyney family up the Quadrangle.

After posing for a class portrait outside of the building, they assembled to lead the

Opposite Emlen Hall, the procession merged with the lineup of Cheyney

University seniors and proceeded Class Gift of $10,000 to the Cheyney University Scholarship toward the stage. Fund. As is the custom, the 50th anniversary class occupies a Cheyney memories were shared place of honor in the front rows to by Howard Jennings and Shirley enjoy a close look at the excited Taylor Maddrey, and a roll call new graduates. The class is also for class members who had the first to link hands and sing the passed was particularly touching. Alma Mater at the conclusion of The Class of 1963 plans to raise the program. another $10,000 in support of the A lovely lunch in Carnegie Hall Scholarship Fund. If you would Great Room followed with greetings like to support the Scholarship offered by Cheyney University Fund, please send your donations President Michelle R. Howard- to the Office of Alumni Relations. Vital, Miss Cheyney 2013 Janelle McKelvey, and guest speaker To ensure that your donation is Jean Sutherland Walton ‘63. deposited into the correct account, please make checks payable to the “Cheyney University Alumni Ralph Patterson, Sr. presented a

Led by Lottie Washington ‘69, this commemorative CU quilt will be on display for all during CUNAA’s Fall General Membership Meeting

The Cheyney University National Alumni Association would like to congratulate the recipients of the following Alumni Day Awards.

We would like to respectfully recognize the following Cheyney alumni, who have passed on in their journey.

Congratulations to Barbara Cottman Jackson, Class of 1971, for being awarded the James H. Duckrey Service Award. This award is given to an alumni in recognition of their service within the National Alumni Association.

In April 2013, Class of 2008 alumnus Garvin Reid coordinated the fourth annual Male Empowerment program that allowed more than 400 young black and Latino males from the five boroughs of New York City to be mentored by 65 working professionals. The event was sponsored by Monroe College in Bronx, NY and featured Ryan C. Mack, Founder and CEO of Optimum Capital Management as its keynote speaker and Cheyney University alumnus Cedric Perry did a live taping of his web TV show Pick 6, during the event. Perry was recently featured in The Philadelphia Inquirer his hit Web TV shows, We’re Just Talking, which attempts to smash the stereotypes 10

associated with student life a tHistorically Black Colleges and Universities. The 15-minute show is regularly recorded right on Cheyney University’s main campus and the cast is made up of current students and alumni. The April event also showcased the expertise of four other Cheyney alumni who participated in the empowerment forum as mentors to high school-aged males. Devyn Swain markedly traveled from Pittsburgh, PA to share his story and mentor youths for the day. Members of the Cheyney University Delta Pi Chapter of Alpha Phi Alpha Fraternity, Inc. also provided support for the event--showcasing just how influencial young alumni can be in

The Philadelphia Chapter held several successful membershipdriven events honoring Greek Fraternities and Sororities of the Divine Nine. At each of its monthly membership meetings, the Philadelphia Chapter has honored a different organization and has successfully engaged new and dormant Cheyney University alumni at each one. In February, they kicked-off this initiative by honoring the ladies of Delta Sigma Theta Sorority, Inc. This was especially significant because the organization was in the midst of its Centennial Celebration. Special recognition was given to the members of Delta Tau and the Philadelphia Alumnae Chapter (Xi Sigma). In March, recognition was given to the ladies of Alpha Kappa Alpha Sorority, Inc. and the gentlemen of Alpha Phi Alpha Fraternity, Inc. Special recognition was given to the members of Delta Iota and Delta Pi Chapters. The mighty men of Omega Psi Phi Fraternity, Inc were recognized during the month of April. Members of the Cheyney University chapter of Beta Gamma Chapter were

Beta Sorority, Inc. and Phi Beta Sigma Fraternity, Inc. during its June meeting. Special recognition was given to the members of Cheyney Chi and Gamma Omicron Chapters.

were given special recognition during the meeting. In May, the Philadelphia Chapter recognized the gentlement of Kappa Alpha Psi Fraternity, Inc. In that same month, the Gamma Omega Chapter of Cheyney University celebrated its 63-year anniversary and were invited to participate in the festivities. As the year to an end, the chapter will recognize the members of Zeta Phi

Philadelphia Chapter meetings are open to the public and are held on the first Thursday between September and June. As the year to an end, the Philadelphia Chapter will recognize the members of Zeta Phi Beta Sorority, Inc. and Phi Beta Sigma Fraternity, Inc. during its June 2013 meeting. Special recognition will be extended to members of Cheyney Chi and Gamma Omicron Chapters. The Chapter intends to host meetings highlighting the members of Sigma Gamma Rho Sorority, Inc. and Iota Phi Theta Fraternity, Inc. in the fall. In 2012, the Philadelphia Alumni Chapter gave Cheyney University students $5,000 for scholarships. This summer, the Chapter plans to host a bowling party in support of its scholarship initiatives. News about the date and time can be found on the Official CUNAA Facebook Page in the future.

North Carolina Chapter recently completed one of its annual fundraisers, the NC Chapter Auto Bell Carwash Project, where they sell Auto Bell carwash coupons at a discounted rate. This project was chaired by Wanda DeLaine and allowed the Chapter to sponsor six Student Book Awards ranging from $250 to $300 in 2012. This summer, the National Black Theatre Festival will be held in Winston Salem, NC. Cheyney University alumni are encouraged to purchase a ticket for transportation and lodging through CUNAA so that they may enjoy the event amongst CU family. Barbara Robinson-Ashe says, “The NC Chapter is looking forward to welcoming National and other Alumni Chapter members to North Carolina! We expect a good time to be had by all.”

The NC Chapter is committed in our efforts to support Cheyney University’s Marching Band, which they do by soliciting contributions from friends, fellow alumni, businesses and family on an annual basis. They expect to restart their fundraising cycle in the late summer. In 2012, North Carolina Chapter raised $3,500 in support of the Soulful Sound Marching Band.

In December 2013, the NC Chapter will host its North Carolina Chapter Holiday Celebration at the home of Charter Member, Dr. Morris Peterkin. If you are interested in attending, please contact Dr. Peterkin for additional information.

The Cheyney University Alumni Chapter of Delaware County would like you to join us in congratulating Yasir N. Roundtree on his acceptance to the Doctor of Education program in Educational Leadership at Delaware State University in Dover, DE. Roundtree, a certified teacher and administrator, graduated from Cheyney University in 2010 degree in Elementary Education. Following his graduation from Cheyney, he went on to earn a Master of Education in Educational Leadership, with honors, from American College of Education in Indianapolis, IN, as well as a Master of Science in Reading, with high honors, from Lincoln University in Oxford, PA. Roundtree says that he plans to do his dissertation research on the impact of communities of practice on employee job satisfaction,

Membership Chair Sheree Monroe has also been accepted into the Master of Education in Elementary Education program at Lincoln University. Monroe graduated from Cheyney University in 2004 with a degree in Recreation & Leisure Management and currently teaches second and third grade reading at Mastery Charter Schools in Philadelphia. Monroe proudly serves as the Membership Co-Chair for CUNAA and is currently a candidate for the Board of School Directors for the Southeast Delco School District. Elections are scheduled for November 2013.

Monroe says that hopes this masterâ&#x20AC;&#x2122;s program will allow her to enhance the lives of her students by being a positive example of what education can do for an individual if they remain dedicated and goal oriented. We wish Yasir and Sheree the greatest level of success and look forward to seeing them graduate from yet another HBCU. Keep up the good work! In other news, this June, the Delaware County Chapter will host its monthly general membership meeting and offer $100 book vouchers for all future Cheyney students who attend. In August, the Chapter will award two Cheyney University students with $600 book scholarships for the 2013-2014 academic school year. 13 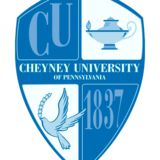 This is the summer 2013 edition of the Cheyney University National Alumni Association newsletter.

This is the summer 2013 edition of the Cheyney University National Alumni Association newsletter.