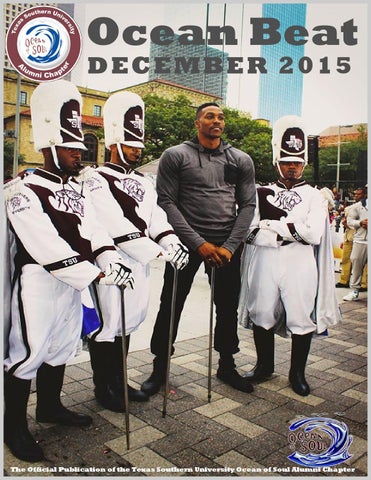 25 % discount off all OOSAC Activities (with membership card)

Correction The Texas Southern University National Alumni Association Ocean of Soul Chapter would like to extend a Special Thanks to the Homecoming Tailgate Committee for an Outstanding Job in organizing the tailgate. Special Thanks to Cassandra Crosby, Daphne Proctor, TeShonda Lee Jamerson, Mellina Ridout, Marcus “Chino” Montgomery and all of the other volunteers who helped make the Homecoming Tailgate a success despite the rain. Also A Special Thanks to Reginald Anderson and Brothers of the Zeta Nu Chapter of Kappa Kappa Psi for providing the Seafood Boil.

Again, thank you again for all your efforts!

Psalm 78:72 So he shepherded them according to the integrity of his heart, And guided them with his skillful hands.

Barack Obama is quoted as saying, &quot;Making your mark on the world is hard. If it were easy, everybody would do it. But it&#39;s not. It takes patience, it takes commitment and it comes with plenty of failure along the way.&quot; He continues to note that &quot;The real test is not whether you avoid this failure...because you won&#39;t ... it&#39;s whether you learn from it; whether you choose to persevere.&quot; For the last 47 years, “The General” Professor Richard F. Lee has lived a life that had come full circle. Professor Lee began his music career as a student at Texas Southern University as a member of a marching unit that had recently been christened with a name that would later become an indelible part of our hearts. Director Lee’s musical journey would take him to Shaw and Howard University and subsequently returning to where his journey began to assume the helm as Director of Bands at his Alma Mater. Director Lee has been an inspiration to many former and current student during his tenure in hopes of molding the next generation of leaders, music teachers and musicians.

We thank you for your service and dedication to Texas Southern University and the Ocean of Soul.

Texas Southern University Alum and 2015 Ocean of Soul Honoree Michael Strahan will be in Houston, December 2 from 5:00 PM –6:30 at the Barnes &amp; Nobles in River Oaks ( 2030 West Gray) to sign copies of his new book, “Wake Up Happy: The Dream Big, Win Big Guide to Transforming Your Life.” ABOUT THE BOOK From America’s favorite football player turned morning talk show host—a man who makes just about everything look easy—a mélange of stories and motivational advice to inspire the reader to run up the heat and go from good to great in pursuit of their personal ambitions. He developed what he calls “Strahan’s Rules—a mix of mental discipline, positive thinking, and a sense of lay. He used the Rules to forge a successful post pro-ball career as co-host with Kelly Ripe on Live! - a position for which he was considered the longshot –and much more . In Wake Up Happy, Michael shares personal stories about how he gets and styas motivated and how readers can do the same in teir quest to attain their life goals.

Texas Southern University&#39;s Ocean of Soul Marching Band is scheduled to perform Saturday, December 5 in the 43rd Annual Hometown Holiday Parade. The band, known for its heavy beat, precision drills and intricate dance routines, has performed at NFL games and other national events. The parade, which is scheduled to start at 5:30 p.m., will open south on Hampton Road and end in front of the Jim Baugh Government Center, 211 E. Pleasant Run Road.

Hubert Laws, Jr. - Ocean Alumnus 1958-1960 Hurbert Laws, Jr. began playing flute in high school after volunteering to substitute for the school orchestra&#39;s regular flutist. He became adept at jazz improvisation by playing in the Houston-area jazz group the Swingsters, which eventually evolved into the Modern Jazz Sextet, the Night Hawks, and The Crusaders. At age 15, he was a member of the early Jazz Crusaders while in Texas (1954–60), and also played classical music during those years. Winning a scholarship to New York&#39;s Juilliard School of Music in 1960, he studied music both in the classroom and with master flutist Julius Baker, and played with both the New York Metropolitan Opera Orchestra (member) and the New York Philharmonic In the 1990s Laws resumed his career, playing on the 1991 Spirituals in Concert recording by opera singers Kathleen Battle and Jessye Norman. His albums on the Music Masters label— My Time Will Come in 1990 and, more particularly, Storm Then Calm in 1994—are regarded by critics as a return to the form he exhibited on his early 1970s albums. He also recorded a tribute album to jazz pianist and pop-music vocalist Nat King Cole, Hubert Laws Remembers the Unforgettable Nat King Cole, which received critical accolades. Among the many artists he has played and recorded with are Herbie Hancock, McCoy Tyner, Nancy Wilson, Quincy Jones, Paul McCartney, Paul Simon, Aretha Franklin, Ella Fitzgerald, Sarah Vaughan, Lena Horne, Leonard Bernstein, James Moody, Jaco Pastorius, Sérgio Mendes, Bob James, Carly Simon, George Benson, Clark Terry, Stevie Wonder, J. J. Johnson, and The Rascals.[3] In 1998, Laws recorded with Morcheeba for the Red Hot Organization&#39;s compilation album Red Hot + Rhapsody, a tribute to George Gershwin, which raised money for various charities devoted to increasing AIDS awareness and fighting the disease Orchestra, 1969–72. While at Juilliard, Laws played flute during the evenings with several acts, including Mongo Santamaría, 1963– 67 and in 1964 began recording as a bandleader for the Atlantic label, and he released the albums The Laws of Jazz, Flute By-Laws, and Laws Cause. He guested on albums by Ashford &amp; Simpson, Chet Baker, George Benson, and Moondog. He also recorded with younger brother Ronnie Laws album The Laws in the early 1970s. He also played flute on Gil Scott-Heron&#39;s 1971 album Pieces of a Man, which featured the jazz poem &quot;The Revolution Will Not Be Televised&quot;. During the 1970s he was a member of the New York Jazz Quartet. He

The 2nd Annual Ronald B. Thornton Scholarship Brunch The 2015 Ocean of Soul Scholarship Brunch was a huge success. This year&#39;s Hall of Fame Honorees, Dr. Howard &quot;Prof.&quot; Harris and Prof. Edward Earl Thompson joined the ranks of our Ocean Legends, before a crowd of enthusiastic Ocean Alumni, Ocean Students and friends. The Ocean of Soul Alumni Chapter (OOSAC) would like to send our deepest appreciation to the sponsors of the 2nd Annual Ocean of Soul Scholarship Brunch, which include: The Houston Percussion Center, Equisales, Dinky Drum Company, A&amp;R Towing and Mr. Kirk Whalum. We would also like to thank friends and supporters of the Ocean of Soul; Terah Bias, Edwin Rose of Bespoke mages, Kappa Kappa Psi, Tau Beta Sigma, Mr. Larry Hale of KTSU, Eve Weeks and Joyce Adams (decorations), and Gerald Crawford (DJ) and Patrick Quinn. Without each of you, we would not have been able to host this event, and we look forward to partnering with you in the future. In addition to the Ocean Hall of Fame awards, the OOSAC presented the first ever Ocean Honors Awards to Mr. Michael Strahan and Kevin Hart, who were not able to attend. A special award was given to &quot;The General&quot; Professor Richard F. Lee for his 22 years of leading the Ocean of Soul Marching Band. During the video and award presentation, there was not a dry eye in the room (We Love you Mr. Lee!). Texas Southern University Administration officials unveiled a replica of the bronze plaque of Maestro Benjamin J. Butler II, which will be prominently displayed on campus. As the Ocean moves on to the next chapter, we must continue to work together to &quot;Build for the Future&quot;. The Ocean of Soul can only be successful if the Ocean Alumni, Ocean Band Students, and Ocean Staff consciously strive daily, to make the Ocean of Soul the best in the land.