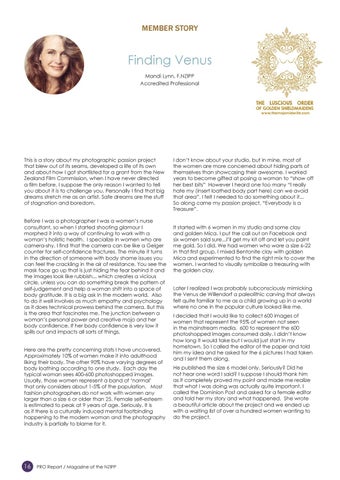 This is a story about my photographic passion project that blew out of its seams, developed a life of its own and about how I got shortlisted for a grant from the New Zealand Film Commission, when I have never directed a film before. I suppose the only reason I wanted to tell you about it is to challenge you. Personally I find that big dreams stretch me as an artist. Safe dreams are the stuff of stagnation and boredom. Before I was a photographer I was a women’s nurse consultant, so when I started shooting glamour I morphed it into a way of continuing to work with a woman’s holistic health. I specialize in women who are camera-shy. I find that the camera can be like a Geiger counter for self-confidence fractures. The minute it turns in the direction of someone with body shame issues you can feel the crackling in the air of resistance. You see the mask face go up that is just hiding the fear behind it and the images look like rubbish... which creates a vicious circle, unless you can do something break the pattern of self-judgement and help a woman shift into a space of body gratitude. It is a big ask in the modern world. Also to do it well involves as much empathy and psychology as it does technical prowess behind the camera. But this is the area that fascinates me. The junction between a woman’s personal power and creative mojo and her body confidence. If her body confidence is very low it spills out and impacts all sorts of things. Here are the pretty concerning stats I have uncovered. Approximately 10% of women make it into adulthood liking their body. The other 90% have varying degrees of body loathing according to one study. Each day the typical woman sees 400-600 photoshopped images. Usually, those women represent a band of ‘normal’ that only considers about 1-5% of the population. Most fashion photographers do not work with women any larger than a size 6 or older than 25. Female self-esteem is estimated to peak at 9 years of age. Seriously. It is as if there is a culturally induced mental footbinding happening to the modern woman and the photography industry is partially to blame for it.

PRO Report / Magazine of the NZIPP

I don’t know about your studio, but in mine, most of the women are more concerned about hiding parts of themselves than showcasing their awesome. I worked years to become gifted at posing a woman to “show off her best bits” However I heard one too many “I really hate my (insert loathed body part here) can we avoid that area”. I felt I needed to do something about it... So along came my passion project. “Everybody is a Treasure”. It started with 6 women in my studio and some clay and golden Mica. I put the call out on Facebook and six women said sure...I’ll get my kit off and let you paint me gold. So I did. We had women who wore a size 6-22 in that first group. I mixed Bentonite clay with golden Mica and experimented to find the right mix to cover the women. I wanted to visually symbolize a treasuring with the golden clay. Later I realized I was probably subconsciously mimicking the Venus de Willendorf a paleolithic carving that always felt quite familiar to me as a child growing up in a world where no one in the popular culture looked like me. I decided that I would like to collect 600 images of women that represent the 95% of women not seen in the mainstream media. 600 to represent the 600 photoshopped images consumed daily. I didn’t know how long it would take but I would just start in my hometown. So I called the editor of the paper and told him my idea and he asked for the 6 pictures I had taken and I sent them along. He published the size 6 model only. Seriously? Did he not hear one word I said? I suppose I should thank him as it completely proved my point and made me realize that what I was doing was actually quite important. I called the Dominion Post and asked for a female editor and told her my story and what happened. She wrote a beautiful article about the project and we ended up with a waiting list of over a hundred women wanting to do the project. 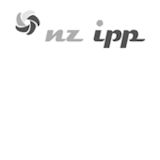