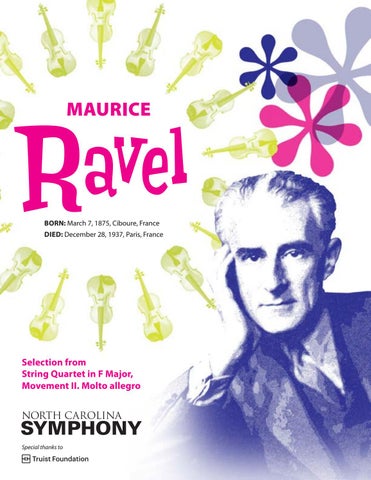 Biography Maurice Ravel was a French composer, pianist, and conductor. Born in Ciboure, France, Ravel’s talent for music became apparent at an early age. He entered the Paris Conservatoire at the age of 14, where he composed some of his best known works, including his String Quartet in F Major and Sonatine for piano. Widely regarded among the most significant and influential composers of the early 20th century, Ravel is frequently linked with Claude Debussy as an exemplar of musical Impressionism. In 1928, he toured North America and met George Gershwin, who helped broaden Ravel’s exposure to jazz. The influence of Gershwin and jazz can be heard in Ravel’s later works, including his Sonata for Violin and Piano No. 2 and the Piano Concerto in G.

Fun Facts About Ravel • The music of Ravel and Debussy differed greatly, so much so that they had a rivalry with one another that eventually turned to mutual admiration. • In 1928, he led a four-month, 25-city tour of the United States. Much of his jazz influence came from visits to Harlem and New Orleans with George Gershwin. • Ravel loved to turn piano works into orchestral showpieces, including his own Mother Goose Suite and Le Tombeau de Couperin, as well as Mussorgsky’s Pictures at an Exhibition.

Composer’s Life • Ravel’s father Joseph was an inventor, responsible for a notorious “Whirlwind of Death” circus machine. Joseph took his sons to factories to see the latest machinery and instilled in them a love of music. • The young Maurice Ravel was captivated by new music coming out of Russia, particularly RimskyKorsakov’s. • By age 20, Ravel was something of a dandy — meticulous about his appearance and demeanor. He enjoyed good food, fine wine, and spirited conversation. • Ravel studied composition with Gabriel Fauré, and generally had strong opinions on music and musicians. He described much of Beethoven as “exasperating,” Wagner’s influence “pernicious,” and Berlioz’s harmony “clumsy.”

Featured Work: Selection from String Quartet in F Major, Movement II. Molto allegro Ravel composed his String Quartet in F Major in 1903, while still a student of Gabriel Fauré at the Paris Conservatoire. The work proved to be Ravel’s first major success as a composer, though his submission of the work for the Prix de Rome composition prize led to his expulsion from the Conservatoire. The second movement is a scherzo of sorts, with a fast section marked by an energetic pizzicato motif and lyrical second theme. The use of pizzicato punctuates a rhythmic complexity based on the syncopated cross-rhythms of playing 6/8 and 3/4 in alternating measures, as well as simultaneously in different instruments. The slower middle section transforms the second theme several ways, most notably by having the second violin strum it in chords.

CLASSROOM ACTIVITY #1: Virtual Lesson on Musical Sound Effects NORTH CAROLINA ESSENTIAL STANDARDS IN MUSIC: 4.ML.2.3 – Interpret standard symbols and traditional terms for dynamics, tempo, and articulation while performing music. 4.MR.1.1 – Illustrate perceptual skills by moving to, answering questions about, and describing aural examples of music of various styles and cultures. OBJECTIVE: Students will watch a video where string instruments perform pizzicato, trills, and tremolo, and then answer questions about these musical sound effects. MATERIALS: North Carolina Symphony video for the second movement of Ravel’s String Quartet in F Major, Questions based on the video. PROCESS: 1. For a virtual lesson, teachers may introduce the activity by sharing a brief mini-lesson video:

• Explain that music is more than just pitches and rhythms. Composers create musical sound effects by telling musicians how to play certain notes with markings such as pizzicato, trills, and tremolo.

• Provide a brief history on Ravel and his String Quartet in F Major.

• Remind students that they can pause the video and/or rewatch sections of the video to make it easier to answer the questions. Some of the answers go by quickly!

1. What instruments make up a string quartet? (two violins, viola, and cello)

2. What does pizzicato mean? (plucked)

3. What does trill mean? (alternating between two notes very rapidly)

4. What is the Italian word for tremble? (tremolo)

5. How does a musician perform pizzicato? (instead of using the bow, the musician plucks the strings with a finger)

6. Does the woman with the viola bow or pluck the last note of the piece? (pluck)

7. Why do you think the composer uses pizzicato, trills, and tremolo in this piece? (Answers will vary)

• Tremolo – Tremble both hands quickly. In this piece the tremolo starts at a higher pitch and slowly descends to a lower pitch. To match the contour of the pitches, students may begin their tremolo by trembling their hands up high in the air and slowly moving their trembling hands down towards the floor.

5. Hold up the visuals of pizzicato, trill, and tremolo which are provided. Have students perform the correct movement as the teacher changes the visuals.

6. Play the audio of the second movement of Ravel’s String Quartet in F Major. As the music plays, the teacher holds up the appropriate visuals to match the music and students move their bodies. If there are no pizzicato articulations, trills, or tremolo, then the teacher does not hold up a visual and students stand still. Note: Since the students should be watching the teacher for this activity, the teacher can turn off the projector while playing the video so the students have access to the audio only. The performance of the piece in full begins at 1:52. Below are approximate timings to help the teacher hold up the correct card at the appropriate time:

7. To see if students can perform independently, play the music again without holding up the visual cues. Students perform pizzicato, trills, and tremolo as they hear them in the performance. If students need scaffolding, the teacher may show the video instead of just playing the audio, but the visuals in the video do not capture every pizzicato, trill, or tremolo. Let students know they should listen for and perform the “hidden” sound effects that the video does not label. 8. For a formative assessment, have students complete an exit slip answering the following questions:

• What does pizzicato mean? (plucked)

• Why do you think the composer uses pizzicato, trills, and tremolo in this piece? (Answers will vary)

The Ruby and Raymond A. Bryan Foundation Fund

Fun facts about the life of Maurice Ravel and the music of his String Quartet in F Major, with classroom activities to learn about musical effects including pizzicato, trill, and tremolo. Created by the North Carolina Symphony. 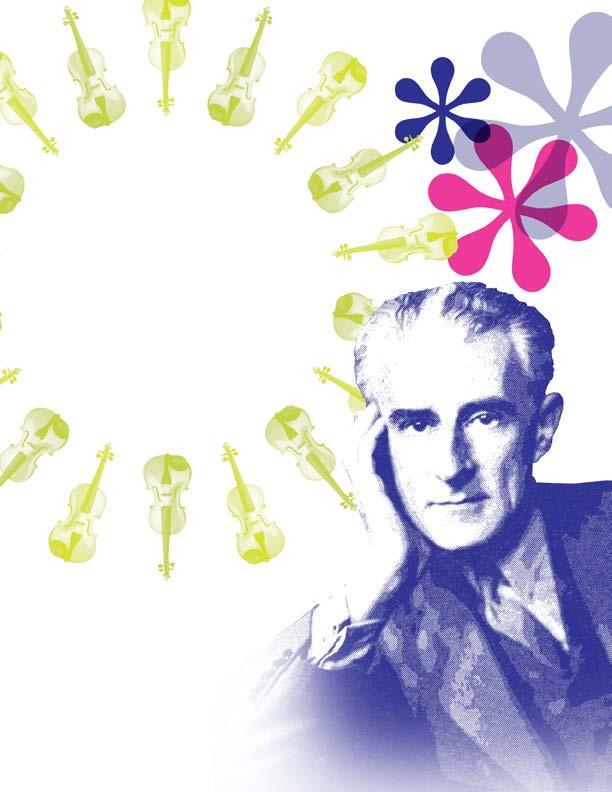