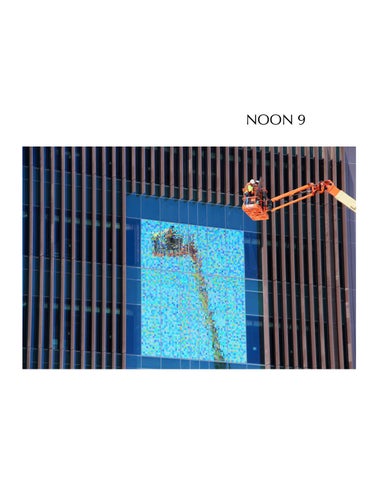 The map, as I have said, is not quite real It is an image of a place, but not desire A ghost of fragmented buildings Which tries to hide the dirt beneath our feet Weâ&amp;#x20AC;&amp;#x2122;re all born in dirt. We revel in it Then drift under compact night skies Toward sterile placenames, markers Of our fear of birth, &amp; later.

MUSIC Factor the angles of sun’s dalliances Invent a cacophony of bones Meet with the shadows of birds, laughing Presume all is music If I meet you I will throw everything down The line ’til you clamber &amp; Touch The wind’s face

POLONAISE FANTAISIE Strange gestures of musicians. The way a pianist might draw a hand up with resolve, as if to entice some weighty chord to linger in the air just that much longer, or even haul a stray note bodily from the abyss of the keyboard as one would a child that has tumbled into the well. What bothers me is how this useless coaxing sometimes seems to work.

After thinking I am not who I thought myself to be I couldnâ&amp;#x20AC;&amp;#x2122;t imagine being anyone else

as one at rest (in chaos)

evolving trick (in chaos) of theory

a circuitry (at rest)

or God: all things—the plants the self a thought

plants and animals, all things

the fat neat man in a well-appointed train

as one (in theory) evolves

NOMEN (liminal) It’s at the borders one’s identity is checked. In between, harbor, a meadow. The child in summer: immortality. The lazy fall into one’s own shadow. A daughter’s horse a length of yellow string she drags between her legs; Grandfather’s chair— in family stories, selves resurrect in things. The one who dies, the one who disappears becoming less a feeling than idea. Coastal fog, burning off, inks a low pale line between the ocean and the sky. On morning dog walks, “A he or she?” strangers, before they pet her, need to know. When said, a what pulled from a pile of whys.

puddled night pavementâ&amp;#x20AC;&amp;#x201D; the shape my past refuses to take

rounding a curve on the empty road a heron lifts

rain the bauble buried in a uniform

sutures of light residue in the chamber after naming

MY HOUSE My house is made of notebooks And all the rooms are years. I build myself from what I write, Especially my fears. The room thatâ&amp;#x20AC;&amp;#x2122;s locked I visit most, The key is polished with use. It helps me build the other rooms That multiply the house.

REVOLUTION The gates to the courtyard Are burning. From this distance, The blaze is a pointed play of light And the soldiers are like ants Carrying small pieces of the city At the corner of my eye To build a barricade. I cannot hear them cry.

* mid-life crisis: a time to fabricate invulnerable lookalike, a stand-in, a fall guy who cannot be hurt Do they cast droplets of blood, teardrops, and dribbled spittle upon the page,â&amp;#x20AC;&amp;#x201D;as do I? Hundreds of them running naked away from the manifestation donâ&amp;#x20AC;&amp;#x2122;t want to be shown the cure-all, the miracle drug that will eliminate all sickness, covering their eyes but not their private parts, non-violent

CARTESIAN MEDICATION No mind no body no problem.

one thought over laps another un til both are gone

all the links go somewhere paranoid

HOMAGE TO WCW scattered weeds and leafless vines brownish showing no signs of life what is to be done with all this verbiage? the doctor drives past the field on his way to the contagious hospital the words grip down and begin to awaken

To a bird, a roof is a preposition.

between their given names crows

deeper into its own brand of clarity painted turtle

overwintering dunlin spatter the mud intent as mites on cheese

from small deliverances the passengers arrive clutching their lovely things

the hunt for unclaimed bones beneath a helicopter sky a childâ&amp;#x20AC;&amp;#x2122;s fur-grimed toy snared in a hedge

A MAN DIES DRUNK ONE NIGHT FISHING FOR HIS KEYS The drain I cannot pass for thinking of your face pressed to the iron grate â&amp;#x20AC;&amp;#x201C; moonless, eyes already clouded over. Single. Childless. An engineer. I read in the paper later.

DAUGHTER her croon â&amp;#x20AC;&amp;#x201C; the unclaimed space between skyscrapers.

MY LIFE BEHIND GLASS so lonely, the little verbs

Darkfield: deeper inside this snowflake river - for john martone

FOCUS he thinks the birds are on the radio

Some mornings we are given stories to tell but little time or space in which to tell themâ&amp;#x20AC;&amp;#x201D; So, what else is new? The eyes of a fox staring green among snowflakes just before dawn.

blue hour the pinwheel of doom

A LINE FROM CHUCK BERRY The antecedent objects are multivocalic, non-buffered, directly labeled, characterized by the bones of domesticated animals. Copying the document is prohibited though the original is of poor quality. A fog was moving in. The low contrast reduced perceived speed.

LIFE OFF THE ROAD Get in early so you&#39;re the one that gets to stack the jukebox.

stretch marks on the baristaâ&amp;#x20AC;&amp;#x2122;s breasts her tip jar full

Gion alleyâ&amp;#x20AC;&amp;#x201D; I follow the tsunami on her kimono

at the edge of the universe ranunculus ruffles

emergency space walkâ&amp;#x20AC;Ś I brace myself to leave the house

survivors queue to escape the intermission

fluorescent light in the garden of recurring dreams

sunset flings blood &amp; taffeta across the crumbling sill she is frankly unemployableâ&amp;#x20AC;&amp;#x201D;

like the butterfly—or the old gods— who stalks nothing &amp; lives on nectar— a fish gapes &amp; swims beneath the untouched bones of your food

dandelion to the instant, a sparrow empties its cry into the blank memory of heaven the Lord, a billboard says, is my shepherd [I shall not want] after R. Armantrout

Where I step is muck is lily

smoke that makes the light visible

part the silver drape of afternoon to see wisteria hysteria: all these are but soul tethers

POEM A demon sits knitting in the corner of all poetry.

shorthand for a cloud inside a blue jacket

a pink swish slips the leaves a soft moan

animals on the verge a warm rain pools in my groin

AND NOW I AM And now I am something else, something between, beginning to feel gold filaments over my skin, the pollen-magnetic sensitive hairs of a bee but still here thank God my exoskeletal head, the hood of a beetle up to all of its elbows in dung.

WESTERN sun sweeps the valley the fault line you will not spot until you cross and double back volcanic cones worn to stubs along the rift, figure-eight stitch quilting the valve that revives the pool in waiting, hollow verged with thirst, one slow pulse green through the grass

The poem, occulted In the book drenched in silence Its stillness mocking You You have gone on this journey, Cast these runes, but learned Nothing Burn the poem to ashes Make it over In your spilled body blazing