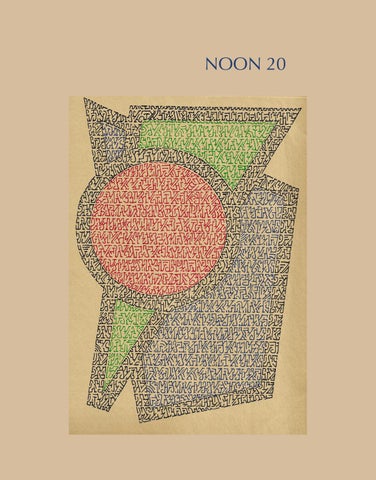 MEANWHILE IN PURGATORY A litany for the weary: ‘Send me your bullet-point pitch asap.’

This poem begins with the image of a red apple, one bite taken, the apple left on a kitchen counter to create mystery that might be resolved in the last line. It has an introspective speculation that existential nihilism is creeping into suburban bourgeois consumerism and an unexpected turn to global warming at the mention of melting glaciers and polar icecaps. Might as well decry assault rifles and mass shootings, gender and racial inequality too, and every injustice it can think of. Throw everything into the pot, with dashes of angsty seasoning as if the poem could boil its way to a society reformed, legislating the world in its unacknowledged way, as if apples could keep the doctor away and save the fucking universe.

record high – I can’t think of the author’s name

the book that almost killed him it’s still raining

the chaos I have become a river’s mouth

inner ear dreaming up a shell

wave after wave a lifetime collapsing

from a forest lies folded into envelopes

the grass persisted to treat me as if I was

all we have done

is to slacken the tempo

of this brief pause

nor earth nor the last nor

at once the snowflake failure eyes

all my plurals singularized this moon

a crack in the stain ed gl ass con viction

Rabid dogs surround the foundry. Did the monks escape in their Model T? Will the sound bites ever fall silent?

A speedboat from the rich &amp; famous, tied to the tray of a trailer truck, precedes me across the bridge. Out of the water, but not a bit like a fish.

flotsam the entropy of bikini ties

cold soup a Boltzmann brain thinks I am

the window by the computer raining ephemera

aurora borealis her body his moodboard

superstring the synth-pop of the spheres

Asu just has to ask about every Hemshin local we meet for a bear anecdote. And a man comes down from the cloud up on the Sal Plateau. From one of its tin-roofed houses. And he tells us he’d rather meet his demise by being mauled by the wild. Better that than being run down by some absentminded driver.

never mind how they got there

but will they skip lunch?

Vast Harbor of Roses We can make a musical notation of ships on the waves. We can put our names between the notes. We can decide the sun’s tones on all the sails. We can make the ships go as far as the music. We can let them return to a harbor of roses.

Secret Letters the walls are painted white the cities, the bridges the faces are all painted white we dip our fingers in ash and on the walls of the future begin to write

Unlike paint on a canvas that the painter intends to allow to run and drip, words on a page stand still dripping.

whittling childhood memories into the point

Barnacles can survive changes in salinity and sanity. One barnacle reminds me of how I see my face when I’m not looking in a mirror. John Levy

fire-ravaged forest after leaving its shadows mine never the same

sea wall the spray from waves with news from abroad

luna piena a refugee eyes you from a kelp bed

evening the odds of dying alone

In the stairwell where I work, pressed tight two years now: shieldbug’s chitinous hut still hanging on for dear death.

Skiff: a word my father gave me for the first snow in Cape Breton drifts over his face tonight

A BIT OF ARS

We’ve had trouble, haven’t we, saying what a poem is. Let’s agree to differ or at least say we can’t say but just know, is that ok? We might need to count the syllables or break free from it all, purge the page clean of syntax or indent lines at apparent whim. Poetry is the thing that just won’t give in.

skipping stones across a thought ellipsis

An old hand at grammaticide Grammarly buttresses him to bark at whoever like another cornered in fume and flame is energized to shriek at the sight of a fire-fighter.

GALLERY Despite scents of rose &amp; iris this is not a garden birdsong recording (robin) mixes with real song (robin) amongst a gentle hum A solitary nightingale a painted study of time its appropriateness not lost while on an angled chair rests a dead bee A church bell rings once

every moment a little death

AFTERIMAGE So difficult to see as new the made bed, broom-straw, egg. A camera palters, spatch-cocks light to speckle shade. The mind makes decoupage: ballerina, oilrig, trout. Moonlight on these canyon walls broadcasts spare artifacts the old ones left behind. What stays? A girl’s finger tracing her mother’s mouth.

AT A CONCERT IN THE PARK the violinist plays Romanza Andeluza – his bow fast, then slow – as a man feeds his lover artichoke hearts from a jar.

JORDAN The swell, drift, eddy and circling back of a river I know he never wanted me to cross alone. Yet here I am in the middle feeding the fish with his ashes.

from UNSEASONED (with apologies to Robert Hass)

A morning–– by myself, chewing on dried salmon.

Taking a nap, feet planted against a wall.

First falling on the half-finished bridge.

The end of the poet is brooding about editors.

The it fell into the darkness of the old well.

A tethered horse, in both stirrups.

The man pulling pointed my way with a

Full my ramshackle hut is what it is.

stairs’ frailty the wolves sped shot they, with Euclid, crumpled exhausted still they go sleepless a huddle of carpenterpencil-flat bodies Euclid only looks like he’s smiling when they lick newsprint off their forepaws

“Well, I guess “Summer’s “Been “A simple song “From a broken “Computer

she can. Only take. So, many butter. flies. hitting. The wind. . Shield

wiping the drizzle off the ocean on my phone

ALL OF TIME all of the time

for your birthday a billion hands arranging rain

stadium of shadows game over

Taxonomy of Windows Floor-to-ceiling glass overlooking a beach you claim to own. Below-deck portholes on your 100-foot yacht. Boarded-up windows of a house on a block in a city left to rot. An interrogation room’s one-way view. Where were you? Where were you?

Taxonomy of Cell Phones In 1990 BC – Before Cells – I chatted with a stranger in a laundromat. We’ve been friends ever since. Now a communication device keeps people from talking to each other, our faces half-aglow in a screen eclipse. We cradle phones like baby birds who’ve slipped from the nest, feed them from our fingertips.

Taxonomy of Passwords An ex-lover’s birthday, the number of feet in a mile, the number of miles to her house. Senha, Portuguese for password. The Czech word for hack: zaseknout. An hour’s worth of blows to a punching bag. The middle name of the child you never had.

weltanschauung – jagged ends of the self

with nowhere to go words collect in the tympanum

the point of an icicle last summer’s rain

Bare trees sway in small winds, late day sun across clouds, afternoon soon over. Below us a car moves, houses still, a bridge far off, inlet, the vague sea.