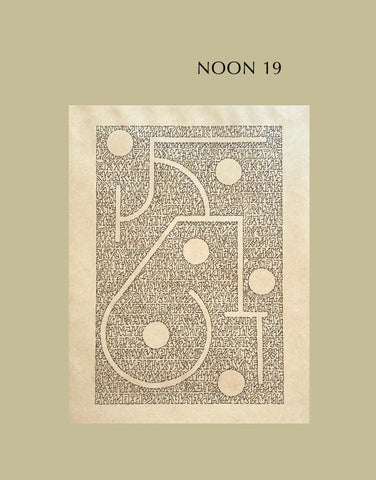 A last truck parked on standing water, surface run-off, gusted leaves drowned in overflowing drain pools: nothing’s only good or bad, think what you will, and nothing unalloyed for thought here in its homelessness … It follows beaten paths through woods yearning to be somewhere, to be somewhere else.

Then, daily, on these built-up pavements, over cracked, root-buckled flags I try to glimpse, as from a ridgeline, the landscape’s reconfigured views, well-hidden, buried country, country before us and beyond this parenthesis, still open, its minute slice of time.

Sometimes I dig at memory, because I have to keep an ice-hole open. Sometimes an unexpected word slides down and through like a harpoon.

Who can say where the door is, swinging on unseen hinges at a touch into a room, unguessed, behind the wall? So the sun’s arc shifts out of cloud and the near, never noticed hill burns like a lover’s breast.

A floater, scarcely seen in the planktonic free-for-all – white medusa hooked around its drop of grit – eddies with spore, bacterium, virus and mite through this ocean of air. One flake, but on the wheel my hands stiffen for skid. Already in your blood, your generous O positive, one sloughed cell drifts, perhaps, upon the tide, twisted instructions coded for ice.

It’s like an argument in an unmade bed. The confrontation comes out of nowhere and escalates rapidly. This morning’s bird alarms bring us to the window. A clash between scrub jays and their darker cousins the Steller’s jays. It’s loud and raucous, a ruckus, voices embedded in the tree bark like shrapnel for these duff shakers. All this bravado for leftover peanuts put out by our neighbor. Each troupe is adamant that they are the rightful beneficiaries of this plenty. Who gets to fatten their stashes, their survival caches? Winter is measured in quarter hours. We look for assurances and lose the pillow words. Things are made and then unmade. Drawn to the jay’s harangue, a flyby of warblers recalibrates the mob.

lust an abbreviation of skin

THE END IS THE BEGINNING IS THE END

Before I sleep with you I need to look through your wallet and check your sock drawer. You can watch – I just need to be sure that you are who you say you are.

ODE TO OUR FORE MOTHERS

I’m looking at this electric bill and I don’t even know what I have done with all that supposed light.

In a quiet moment, she announces in full voice her arrival at the precipice of leaving her beautiful mind

Before closing up the library on the last day of the terrible year, he wrote in the work binder for the cleaning crew that night, ‘Please remove the cobwebs on the brick window ledge in the stairwell between the first floor and lower level. Thank you.’

We will not make love: we have to record the sounds the rats make while gnawing the skyscraper’s heart.

My father had a favorite hoe. Before each planting, weeding or harvesting he would beat the edges of its blade with a hammer. He would beat it for quite some time with a vigor one could easily mistake for affection. It had a smaller and rounder blade and a shorter handle than the other hoes. For me it always felt delicate, almost fragile. If he happened to spy any of us using it he always became enraged. My father named it Erzsi. My mother’s name is Erzsi.

the beat of the fontanel when we’re gone

A STORY BY ISAAC BABEL

I read my pop a story with a lot of russian street names most of which I stumbled over and I laughed. he sat on the edge of the bed his hands quietly folded as he listened. that was quite a mouthful, he said.

without you I need to translate every thought to words. not that there weren’t always words between us but those were. song. this now allows no lilt. just prose. prose. fine. I can do that. I’m trying to get used to this. its not like death.

At the office we were asked: cremation or burial? I hid my bandaged hand, burned already by an oven. I wondered, does the mind remain cognizant, do eyes look out and see the attendant mourners, and does one cross over, and then will I see Fess Parker but wish for mother?

All clubs and parties are renounced. We seldom leave the house. The old bricks often bear the prints of fingers that shaped them. We had a small situation this a.m. with our coffee pot but it is fine. The sound of the wind through a mask – an open mouth.

They are terrible with their unused teeth. Sharp, small like a child’s. Their new skin, navel-less bellies. Of halos I am uncertain. Perhaps they shimmer in their magnitude, but the idea of wings is ridiculous and unnecessary. They are light enough to be carried on the least of things. Merely the breath of God, emerging from His lips thin and improbable. When we meet them in our trailers and used bookstores they bring only proof of our neglect. They make evident our unclean teeth, our petty shifting, the horrible movements of our tongues. They are full and we are not. They give no place to enter. The force of their voice is such as to not admit another tongue in their mouths. Their lips when parted lead nowhere.

There are men and there are men on fire. If they are different, it is only accidentally so.

shaving mirror how to slough off what’s inside

water fight to war to fight

so let’s have my kalashnikov talk to your dictionary

a thousand years of fingers quietly groping the afterlife

the emergent christ on second lockdown

from THE LOCKDOWN ELEGIES

I was speaking in tongues many tongues so many mouths in me I was shaking standing there with my arms upraised aquiver with the spirit I wanted tenderness at the last minute one more time * The air has gotten too thick for my lungs. It was full of syllables. * Oh no she said oh no. Oh no I said too.

for the disaster they closed the domain starling dance

abuse the barn hides in fog

Mid-morning deluge: the asphalt like an anvil. Water smears traffic lights, umbrellas, as I pull over for shadows to pass.

FROM THE PEOPLE WITH ENORMOUS WINGS

The old lady struggles, leaving shuffle marks in the snow. No shopping bag, so maybe it’s church and maybe not. Perhaps she is out for a walk, because she can, and the night is spare, and she is undiminished and harder than bone.

ONE FOOT OUT OF BED, HE SPEAKS

One foot out of bed, he speaks for the first time in three days: ‘I have to see about a boat.’ The chair moves when you sit on it. No, it’s moving by itself.

THE TABLE WHERE HE ATE

Carry the box between you; it contains empty space. Take your time, there’s no hurry. Staircase. A case full of stairs.

she refuses to leave the room, any room no, I’m all right they encouraged her at first now it’s too late a battered fish in the toilet, sandwiches hidden in the biscuit tin just a bit of custard, thanks

‘You know the Beatles, “Long Tall Sally” that I played in the car?’ I said. ‘They recorded that in a single take.’ ‘Is there anyone else you can tell that to?’ she said.

chilly reception – a bowl of grapes perfumes the room

stationary clouds … the librarian checks us in

insomnia … the blue fly at the heart of everything

years between pages a plane ticket to my father’s funeral

sunrise lacking an odor the same color pill each day

Twenty years now since our purebred Siamese, blind, and with acute diabetes, passed. I’m remembering how my father ministered her daily shot by needle – how she used to purr, having quickly learned what was good for her, in all the ways that I have not.

despite what Sumerian summer sunsets this dream

some future me in the cicada swing band micro-measures

from SONIMALS (work in progress)

an ant and an antelope elope along a long slow slope

a frugal eagle ogles the guttered bagle, but is it legal?

what harm the charm of a farmer’s market to a marmot whose got karma?

a Saxon ox walks among rocks in its orthodox socks

The colors of those birds in no other words.

TWILIGHT OF THE METAPHYSICIANS

I stood in a river like a branch thrown there by a storm that had ravaged forests, a snag around which language beyond my comprehension flowed except for my own words sticking to me like leaves, telling me I was a tree.

I’ve grown weary of poems whose words apologize for being words, for being static to the fox’s contrapuntal yip, mere shadow to the pebbled colors peeling away from the river stone to shine trout. The fox will lie down in its den. The trout will return to shadow and stone will bury its own.

Some days like are like people – the word, that is, when you wonder as you hadn’t until just now what that ‘o’ is doing there, days you rise and before you know anything, find yourself out walking, unaccountably alive among others who don’t look surprised.