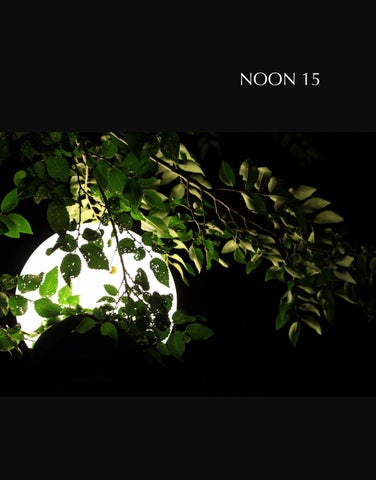 weightless a moment over the green pond

absinthe sky â&amp;#x20AC;&amp;#x201C; the nasturtiums take on an eerie hue

i momentarily trade an adverb for fallen leaves

Black trunk of oak, singed and seared, shelved with a conk of fungus, from the ashes you bring shoots of shine, tart leaves, teal wings.

a tendril grows, turns makes its own sutra

catch me if you can, she sings, our age is foul and devious

day begins on cursal heights of musak, then trills to dusk

beads of rain on the spiderâ&amp;#x20AC;&amp;#x2122;s web a pronoun climbs into my lexicon

winter stillness :: the crash and burn of semicolons

Out in the World

Where do you put your eyes when you have already seen everything? Look for the tarnish. Anything. Escape to other worlds. Reduce the inverted afternoon. A chair is just a cube. Black is a losing color. Like water into concrete, a title comes.

Source: A cut-up/remixed poem composed from Flowers in the Attic by V. C. Andrews.

1. you can’t put this book down – your fingertips stick to the cover like tongues to frozen iron and your eyelids burn away 2. a book certain to start a religion – a moral tale, so simple, so powerful whoever disagrees with it must die 3. every sentence is memorable every line is quotable, and every quote is: the world is a terrible place

sunset at Sittwe: a slice of red, a cut inside my navel bleeding profusely inward

Heresy, to worship only superficial beauty. Beyond your lips, past the pink porch of your yawn, font, chalice, and grape wait in holy union. Deep in that unlit nave, the moist paradise of Beulah. Imagination, depraved abases before no cross, no rose-stained glass, but your uvula hanging immaculate: the Church of the Red Bat.

from Lampedusa 2/due we rented a car with no brakes pigged out on orange fireballs &amp; amber beer when we get home Iâ&amp;#x20AC;&amp;#x2122;ll lather your hips with gram flour &amp; turmeric paste

3/thri a distant scooter saws the night in half grooves cut free from ends of parties float electrical &amp; pulse looped anchor silence to infinity below the cove is motionless hue soon I will sit out in first light and wait for you to wriggle slowly free from sleep

the raspberries in her stomach the bee @ her ear

() each match contains an unhatched flame

these possibilities make me ill at ease

spring is the poet’s job interview

first date he polishes his avatar

spring morning cops cite a saxophonist for disturbing the peace

2-12-16 In the train on the opposite platform, I see one of the clichés of American art: a woman looking out the window with longing. She has raven black hair with a shock of white in front. She looks like a skunk. It has to be intentional. Is it possible for a skunk to feel longing? Skunks are unloved, that’s for sure. Perhaps skunks, from time to time, feel a longing – not to be unloved.

3-7-16 Today, on 7th Ave., there is no vanishing point, nothing to yearn for. Too many delivery trucks double-parked to see any distance at all, much less to the fulfillment of dreams.

A Manoeuvre of Words and Wordlessness When I wake in the middle of the night older than I would like to be I feel a twinge of freedom I look out at the moon surly and aloof and malformed and see beauty embracing the twinge as though it were in full flight. Isn’t that what’s exciting about freedom that it can freeze or paralyse you? And might I add, free or imprison, a manoeuvre of words and wordlessness the mind’s cunning at the body’s expense.

Punctuate A body in motion or at rest must be determined to motion or rest by another body, which other body has been determined to motion or rest by a third body, and that third again by a fourth, and so on to infinity. The dead, who have felt nothing for so long, begin to sway happily on the far shore; memories lap against their feet, spray in fine droplets over their breasts, their beautiful heads. Fire is known to be fire by the heat; fire in the eye, fire in the heart, fire in the loins, all die, and this dying is the heart of the matter. The endeavor, whereby a thing endeavors to persist in its own being, involves no finite time, but an indefinite time.

It from Bit In thirty minutes there will be silence settling in backstage shadows, in the curtain’s high folds, along the floor’s dark, waxed-wood sheen. Because of this wormhole connection, he explained, ‘Ted and Bob are the same.’ So the result is sort of like the happy ending of one of those screwball romantic comedies that involve mistaken identity, and the handsome vagabond turns out to be the prince in disguise: Alice can marry Ted who is really Bob, and the bonds of matrimony extend smoothly across the edge of the black hole. She clears brush from her raspberry patch, re-puttys low windows she can reach. How many thousand provincial capitals blain America?

Occasionally when I am reading a book and have my hand on the page I notice my hand as if it belonged somewhere else, or to some other being. Knuckles, veins, fingers, skin, color, all peculiar and as if also by an author I&#39;ll never meet.

Illustration of Methods of Breaking the PanicStricken Grip of a Drowning Person (for Carolie Parker) The illustrator imagined those waves around the young bodies going down: swirls, thick lines, empty air. I imagine the unnamed illustrator thinking I should not have taken this job, should not have pictured those in despair, in the water, the cartoon dread, cartoon youth.

alone in a cemetery the news

gibbous moon a glimpse of his hereafter

forsythia the scent of her subjunctive

blue horizon who will carry my bag of bones

starlight through my body of metaphors

crossing the river on horseback the river

each/your own the rain beats down the hill until the hillâ&amp;#x20AC;&amp;#x2122;s the Ground

tomorrow/never comes flesh of cloud, voice of traffic the body always within reach

Water Disco It blinds – the asphalt nightclub’s thrum and vapor. A backward glance, I-29 all steam and water stippled down a windshield. Outside, oak leaves decompose. There’s too much noise, light drawls I can’t unhinge. In dark, cicadas cease, from parchment shelters, trilling from a kudzu wall. Rain rings the car roof, falls in beaded curtains through the back door of my vision. Streets, glossed and igneous, spilling buttons.

Sign above a urinal: Water will flow when no one is here.

death poem . . . all my attempts stillborn

zen gardener the gap in his smile in his rake

the plan sketched out beyond me

trowel I revert to bare hands

where the dove tamer hangs his traps summer cloud

blood moon the suddenness of the gun

from Solitary Confinement Day 23 Give me a breath-holding lesson give me hunger. Tear out book pages, bite my fingertips, swallow the air. Make me stronger than granite, louder than church bells. God laughs, watching me stuck in the slow lane to piety, and orders Repent. I grin a hundred times. Jesus and Father Michael hold hands, kneeling on flint. Mealtimes, I chew glass shards.

Night 55 Someone turns a key, the lock clicks and a brief sound of rain sneaks in through the opening. It feels like a sharp scratch.

Objects How they burn and drop. The fork falls just out of reach; the dryer bursts on fire, sets off the smoke alarm. How they resist their square holes. The anchor rips through the deck, the mast fails.

If You See A Bee My mother said: “Why do you always tell the truth?” And: “You’re like all the childless women I have ever known.” “Close your mouth if you see a bee. It might fly in.”

in her breath, a trace of onion . . . mom tries to revise my controversial memories

A failure to experience my life as something other than a transatlantic flight of absurd proportions during which I avail myself of various distractions; convenient and indefensible feeding, snacks, hot drinks, alcohol, pills, movies, and trips to the toilet, all the while struggling to get comfortable as others do the work necessary to ensure that we arrive at our destination.

digging through the fat on either margin

category tombs of a lost cause

moonlit redactions of a frond dance

Graveyard Shadow sediment of silence a polonaise of sunlight pierces the gauze of rain a dim whirring of shadow the wingbeat of a moth&#39;s meditation on time

Time I read a few poems looking out over the hills before the mosquitoes come Sitting here not noticing itâ&amp;#x20AC;&amp;#x2122;s raining until it stops