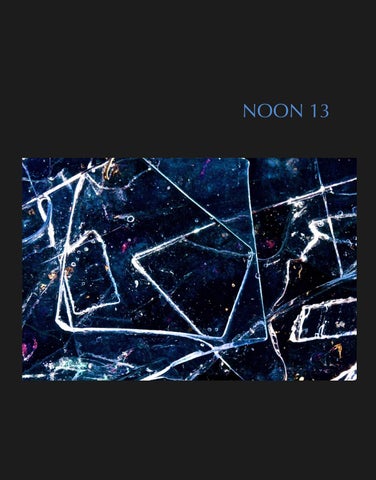 silverfish damage to the prologue

cars parked over the hopscotch

verified as fake news â&#x20AC;&#x201C; my takeover as ruler of myself

The truth comes out. You kill yourself. And go back inside.

ISSA irksome mosquitoes consoling even so

NOC A noctule is a bat, a noctuid a moth. A noctuary an account of what passes during the night. A noctua another moth. A noctivagant wanders at night. When you want dreamy music procure a nocturne. A poem is like the night half the time. What shines in the darkness is noctilucous.

LOOKING BACK Mom hasn't been all there, wherever there is, for a long time now. Slides like hers begin with bits of information lost, blanks we fill in moments later or not and move on. When did she slip away? A few years ago she told me, "I'm losing my memory, you know, it's horrifying." Her aspect was flat, her tone matter-of-fact. The situation brought to mind a Hiroshi Sugimoto photograph of a darkened movie theatre where he set up a camera loaded with black-and-white film, trained it on the screen, and opened the shutter for the duration of an entire movie. The beautiful architecture of the old theatre is faintly illumined by the screen. And the screen itself? All light, nothing but a glowing rectangle, what remains after every moving image is played out from beginning to end. lack of a line between ocean and sky â&#x20AC;&#x201C; scattered ashes

threading the needle a line of faint heartbeat

low clouds during the visit alphabet pieces in the newbornâ&#x20AC;&#x2122;s name

three score and ten years â&#x20AC;&#x201C; light at the end of the bedroom hall

for the sparrows black-oil sunflower seed color of his breviary

scrub and scrub till the ink comes off

WORDS AT DUSK The words I lost at dusk: amulet, totem. If only to defy the onslaught of the rust. The aging of the airtight mind. The verses made of dust. Tomorrow is for what? The autumnal sun sinks beyond the stables and the barns. The pasture suddenly dimmer as if lit by antique chandeliers.

WAKING IN A MOTEL ROOM FROM AN EARLY EVENING NAP to the steady thrumming of Vermont rain. Eyelids open to an unfamiliar ceiling. The coffinâ&#x20AC;&#x2122;s inner lid is never far away.

empty saxophone the wind in the trees

LINES LIFTED FROM WILLIAMSâ&#x20AC;&#x2122;S PATERSON â&#x20AC;&#x201C; a trumpet sounds fitfully. the flame's lover the strictness of beauty What does it matter? cooperation is the key, and happiest non sequiturs. Take up the individual misfortune the snow falling into the water, a green bud fallen upon the pavement its form no longer what it was: the green bush sways: is whence in the air, slow, a crow zigzags

no message in falling blossoms blossoms

The only distance Worth traversing Is moonlight.

Fallen maple leaves lead, Like a red carpet, To Hades.

on the other side of the river the ferryman is drowning

man-made lake swimming in our own imaginations

a sea breeze encrypts messages from the edge

NIMBUS Or does it mean that the tide escapes while the fish are tethered to the jetty?

low tide I remove the lid of a sardine can

data migration humpback over the waves

in the dream it made sense: you were a bird then invisible then a bird again

in the dark an anvil or an identity

I never pray, but when I do, itâ&#x20AC;&#x2122;s to be more like fog in the pines around a lake, to discover inside myself deer and other ghostly animal life.

INSTRUCTIONS My master Ikkyu instructs that I lose myself in her scent like a large cat loosed on a holm: golden eyes, soft claws that deliver. Ikkyu, Ikkyu, you old devil, you.

THE TRAMP in the graveyard said: Jesus is coming soon you know Iâ&#x20AC;&#x2122;ve only taken to drink as a temporary measure

Between Lewis’s “it would have to be

the biggest hoax ever perpetrated”

and the holy, blank scrolls that Monkey finds

you could drive a starship

Beelzebub tells tales within the dead body of his spacecraft

2. Could weariness really be the point? Bien sur.

No height; no width; no depth; no color:

all the mad purpose of a mad universe.

Which you can write down but probably shouldnâ&#x20AC;&#x2122;t say aloud

NEW ERA, 1/20/2017 Best thought, next thought, next jetting of thought as language. “What’s in his head do you think?” Blood has its lexicon; spilled blood

There is what is unthinkable & what comes after. The forest fire that devoured the ponderosas & left the educational center unscathed, for example. The volcano that collapsed, leaving the illusion we could climb down to the other side of the world, the happy understory.

On a day that was beautiful except it was election day November falls through a drunk & unforgiving moon waves cut like accordions up under the dock & for a slow moment in the illusion that we are walking on water we lock pinkies & try to recreate our lives which seem â&#x20AC;&#x201C; inscrutably â&#x20AC;&#x201C; to have become mistakes. Tomorrow Is Cancelled 8

snowflakes on a broken truce no two failures are alike

Errors are like your friends â&#x20AC;&#x201C; They pull you out of the Morass of perfection.

Before I get There Iâ&#x20AC;&#x2122;m not Even here, is How not speaking Japanese feels like To the one Who speaks Japanese In, yes, English.

There are so few selves That people projecting them Show up for.

THE NEW INSINCERITY there is not much in poetry that remains unsaid but that it should be said is not your responsibility.

PROLEGOMENON TO A SITCOM The epic evaporates, Leaving a couch For us to sit on, The ironic family which knows How to stall life And step Into the closing Gap and canâ&#x20AC;&#x2122;t stand The future which is already So bored of us.

VOID IF DETACHED the rise of the meritocracy is the first book i bought over the internet * * * if you entered this webpage without going through menus, click here to learn about the cemetery project * * * void if detached keep this transfer as proof

the wire style of afflictions tufts where once a pasture

DROUGHT A woven basket on the flat public lot in wind makes suspicious improvisations topsy-turvy topples to someone petitioning the sky to be in love with thunder.

Listen soon the young will follow elders to the edge of song be led to the same wild movement a branch of the family at deer.

A MOMENT BEFORE BREAKFAST Reflected as in any metal spoon your face upside-down placed into your mouth (metallic taste) then withdrawn blurred wet-faced revenant of reflection lampoon of spit and wee pillages of torpor all there is.

how to unclasp your silence persimmon peel under my fingernail

her brief dish towel dance outside the rain

wisteria in full bloom the rest escapes me

violet light your need to be violent

revolving door the man with an eyeball tattoo

SUBWAY We step into car three. The light brightens as the tin tapeworm rattles down its hunger, chews deeper into the dark heart of the city. We step out served. The light dims.

DOWN HILL This morning I saw a white-haired man going slowly down hill on his old bicycle, one boot heel dragging. An old man doing everything he can to hold back a smile is an old man smiling. I smile, he waves. “Brakes don’t work, never did,” he shouts back to me.

ATTENTION the railway workers cross the line stepping casually over one live rail (turning to each other and talking) and then the other â&#x20AC;&#x201C; they do this every day, almost not noticing theyâ&#x20AC;&#x2122;re doing it carefully

to step once on a stage

smoke rises from an illusion of future

odd coincidence but to a

3-26-13 It’s one of those infinite skies again, the kind painters love. So many clouds and so much blue – as if the two were simultaneously possible.

ROOM Keep it simple, blue tablecloth, black ink, hand curved to write a signature â&#x20AC;&#x201C; the white sheet requires at least a mark. No one, no one alone looks into empty skies. Curtains are drawn black pen laid down on blue cloth. This initialled letter is complete.

EVENSONG Bells in the distance – Debussy’s cloches à travers les feuilles – here leaves fall and there’s a hiss cats scuttle through faded flowers they own this place. Somewhere in the air between the pulse of an insistent toll. Heart just beats.

unclothed of telling her sojourn on the knifeâ&#x20AC;&#x2122;s edge

POEM FROM CAPROCK CANYONS Winter hasn’t done with us – its chill a breath along the canyon face. Within the river’s insistent drift, listen. Dark cradles dark.