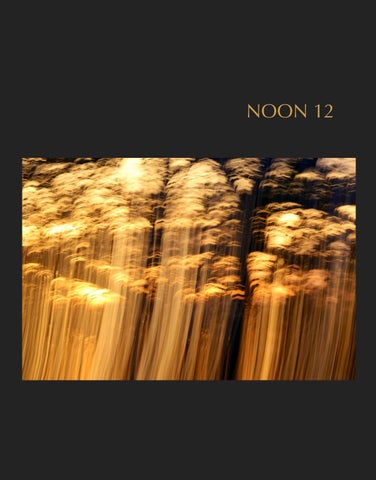 Directions are adequate &amp; complete, trapped in a world of possibilities, impossible choices learning the slow witchery of wind.

once in a while a handful of harbour

the snow only on one side of things

This street was a lot more interesting on the map.

THE LOUIS JORDAN/WCW MASH UP there ainâ&amp;#x20AC;&amp;#x2122;t nobody here but us white chickens

HOW TO BUILD A BIRDHOUSE Start with a song the one you want to hear. Carry it outside and place it out of reach.

bug in a bottle the lightning inside out

blackout some of the darkness is us

wax on, wax off the moon in his fender

anxious morning daylight staying out of the rocks

bats at dusk my words come back to haunt me

deep in my bones sing no more lies

death when the original windows open

EARTH A place where Iâ&amp;#x20AC;&amp;#x2122;ve slept. A thimbleful of hearts, beating &amp; gone. Mother was here as well as You. Welcome.

home birth the moon out

moonlight the stitch in a metaphor

DUOTONE The field is hacked and honey-fed by necessity. It bridles us both. With the goldenrod lined up like taxicabs we know it’s time to leave. Now comes the awkward good-bye – the part where we make promises that we can’t possibly keep. Look at the goldfinches as they assemble into flocks and raid the pantry. They know what they’re after – not gladness. Yet their last-minute flurry doesn’t feel like a salvage run. We succumb to the vertigo of clearing out nonetheless. Despite the hum and bramble bathed in brome light, the furnace in all of us is burning down.

of psychopomp in humus

THE CRUCIBLE, SHEFFIELD Watching the snooker world championship on TV, the defending champion career as a verb body and mind in concert and the challenger two frames ahead watch in and out of thought the song mere murmur amid bright attention bright otherness at that angle using the spider terrific pot selves shed to one or unify in the act of concentration behind the red at what consequence

equinox fucking foxes turf us from our holes

A YOUNG FOX A young fox running across the field, a gliding fluidity. Grass half hides her legs. She does not seem to touch the ground, but to toy (as a kit does with the mouse its mother drops at its feet) with gravity, nipping at it as she goes.

THE ONE The thought comes in, the one that could be more than a thought, but it comes in sideways, it comes in like light off a distant wave looking at first like a ship coming to save me but quickly folds back into the sea.

The lemon trees, a place-name and everywhere those fond quotations, memories, our dead come back like the clatter of a disappearing train between its local station’s two tunnel mouths, the sense of shame and a shame returning too where, paused in foam, the sun-fringed bathers pose. Then it’s as if we had come home to ourselves once more, our fresh discoveries of thirty years before – swimmers in the glittering of their own waves; and yet how changed now, crowds like faces crumpled in that warped cheval glass or, one more example, Chinese sightseers passing underneath his lemon trees!

THREE POEMS FROM AL-ANDALUS In the tidy marina, the tide is going out. My last image of her tugs at its mooring. I pause on a slope of the Alpujarras. The wide sky can&#39;t encompass my loss. A hooded crow calls two hours before fajr. The engraver has come, desperate for epitaphs.

You took away my seas, the run and the running jump, but brought my heels to rest on the earth now violated. So what have you achieved? How well you settled up: lips that won&#39;t stop twitching can&#39;t be amputated. May 1935

from â&amp;#x20AC;&amp;#x2DC;Hellenic Postâ&amp;#x20AC;&amp;#x2122; The Greek fleet has set out and passed the last island fort, on course for Benghazi and Basra with its crude oil carriers. Now Sport. * The myths are wrong. No way was that road to the bus stop 5K.

Professor Putin, I believe, is teaching his module on speeches in front of Pushkin. * Out in the cold, the poem pulled by the past uses its mass to swing out to the future.

A dacha by the offramp. forged weather reports, a smell of goldfinches. banker with a box of distortion pedals.

my students pay rapt attention to the wasp

the Buddha walks into a bar and nothing happens

between my child and i corporate language disguised as a gull

a Montana river in the autumn dawn dot com

i look you back from looking through me lone wolf

PARALLEL LINES Eventually, our gaze fixed at a point in the distance where two rails promise to meet.

TRIANGLE The old cinema in Ginza has now gone. It was half underground, but it was where I took you to see the first film. Damage, a love triangle set in England, the storyline clear and unexpected, the fiançée infatuated by her intended young man’s father. Passion, tragedy and ruin. I was startled by it, but you were so cool, so indifferent, so young. The next film was Gekashitsu, ‘The Surgery Room’, very short, from a mere sliver of a tale. Meiji period setting, lush scenery, almost plotless, but the married woman and the young doctor, who’d never spoken, died for each other. I wanted to see it for the aesthetic style, drawn from the Kabuki theatre nearby and directed by a famous actor. Then, one evening at the crossroads, you changed your mind and came back home with me and spent the night. * There is always a break of some kind. When I returned in late summer, we went somewhere else to see The Lover, a steamy, exotic, half-true tale of Indochina. It was still warm, and I ran my finger down your bare arm, but the season was already changing. From cinema to subway harvest moon

Your long brown fingers and your thirty years with someone else

a thought, barefoot slips along a painterâ&amp;#x20AC;&amp;#x2122;s tendon, pools at the risk. Wrist.

IF I WERE THE OTHER ONE I would appear first on Google, nest my head in my arms looking nonchalant, having written metaphors on diagonals – textual juxtapositions – crazy aerial views carved and collaged onto Smithsonian walls to leave crags and crevices – poetic evocations of communion with Nature’s essentials – that humanise the veins and surfaces of rocks. I would stare out through the holes – apertures – that Wikipedia says produce sensations of helplessness, to remind you that the name is MINE alright? No matter if I am dead.

AFTER EMERSON That the body bodies forth tells Us that the body bodies In harmony at times, at times In disharmony, still more says Such oscillation is itself Body as when mind bodies at Problem’s hint, as when a foot slips On fractious stair or eye spies an Other’s eye; it’s then that body Minds itself, minds body, says look, Here is body, and look, here, too, Is body, for in the morning We walk with our whole body, at Night with just our legs.

SIGHT-READING Foreseeing where the tune would go means you recall how it has been, your moments filled with past and future sounds: the black dots perched on wires, birds scoring an arpeggio!

GOD NAMING Who needs this knowledge, winged in between Talmud and Kabbalah? Instead, should I use the cloudy soup or the changing tonalities, the grammar of birds?

the wind quotes the tree

a bonfire untethers what the bone sea tells your dialectâ&amp;#x20AC;&amp;#x2122;s lingering edges