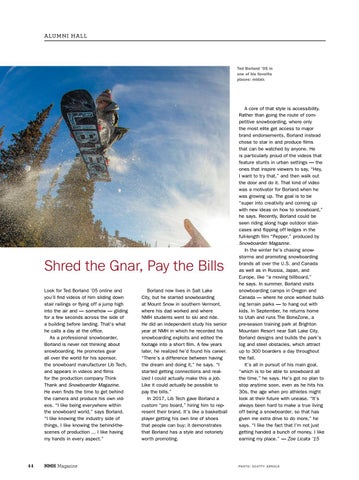 Ted Borland ’05 in one of his favorite places: midair.

Shred the Gnar, Pay the Bills Look for Ted Borland ’05 online and you’ll find videos of him sliding down stair railings or flying off a jump high into the air and — somehow — gliding for a few seconds across the side of a building before landing. That’s what he calls a day at the office. As a professional snowboarder, Borland is never not thinking about snowboarding. He promotes gear all over the world for his sponsor, the snowboard manufacturer Lib Tech, and appears in videos and films for the production company Think Thank and Snowboarder Magazine. He even finds the time to get behind the camera and produce his own videos. “I like being everywhere within the snowboard world,” says Borland. “I like knowing the industry side of things, I like knowing the behind-thescenes of production ... I like having my hands in every aspect.”

Borland now lives in Salt Lake City, but he started snowboarding at Mount Snow in southern Vermont, where his dad worked and where NMH students went to ski and ride. He did an independent study his senior year at NMH in which he recorded his snowboarding exploits and edited the footage into a short film. A few years later, he realized he’d found his career. “There’s a difference between having the dream and doing it,” he says. “I started getting connections and realized I could actually make this a job. Like it could actually be possible to pay the bills.” In 2017, Lib Tech gave Borland a custom “pro board,” hiring him to represent their brand. It’s like a basketball player getting his own line of shoes that people can buy; it demonstrates that Borland has a style and notoriety worth promoting.

A core of that style is accessibility. Rather than going the route of competitive snowboarding, where only the most elite get access to major brand endorsements, Borland instead chose to star in and produce films that can be watched by anyone. He is particularly proud of the videos that feature stunts in urban settings — the ones that inspire viewers to say, “Hey, I want to try that,” and then walk out the door and do it. That kind of video was a motivator for Borland when he was growing up. The goal is to be “super into creativity and coming up with new ideas on how to snowboard,” he says. Recently, Borland could be seen riding along huge outdoor staircases and flipping off ledges in the full-length film “Pepper,” produced by Snowboarder Magazine. In the winter he’s chasing snowstorms and promoting snowboarding brands all over the U.S. and Canada as well as in Russia, Japan, and Europe, like “a moving billboard,” he says. In summer, Borland visits snowboarding camps in Oregon and Canada — where he once worked building terrain parks — to hang out with kids. In September, he returns home to Utah and runs The BoneZone, a pre-season training park at Brighton Mountain Resort near Salt Lake City. Borland designs and builds the park’s log and steel obstacles, which attract up to 300 boarders a day throughout the fall. It’s all in pursuit of his main goal, “which is to be able to snowboard all the time,” he says. He’s got no plan to stop anytime soon, even as he hits his 30s, the age when pro athletes might look at their future with unease. “It’s always been hard to make a true living off being a snowboarder, so that has given me extra drive to do more,” he says. “I like the fact that I’m not just getting handed a bunch of money. I like earning my place.” — Zoe Licata ’15 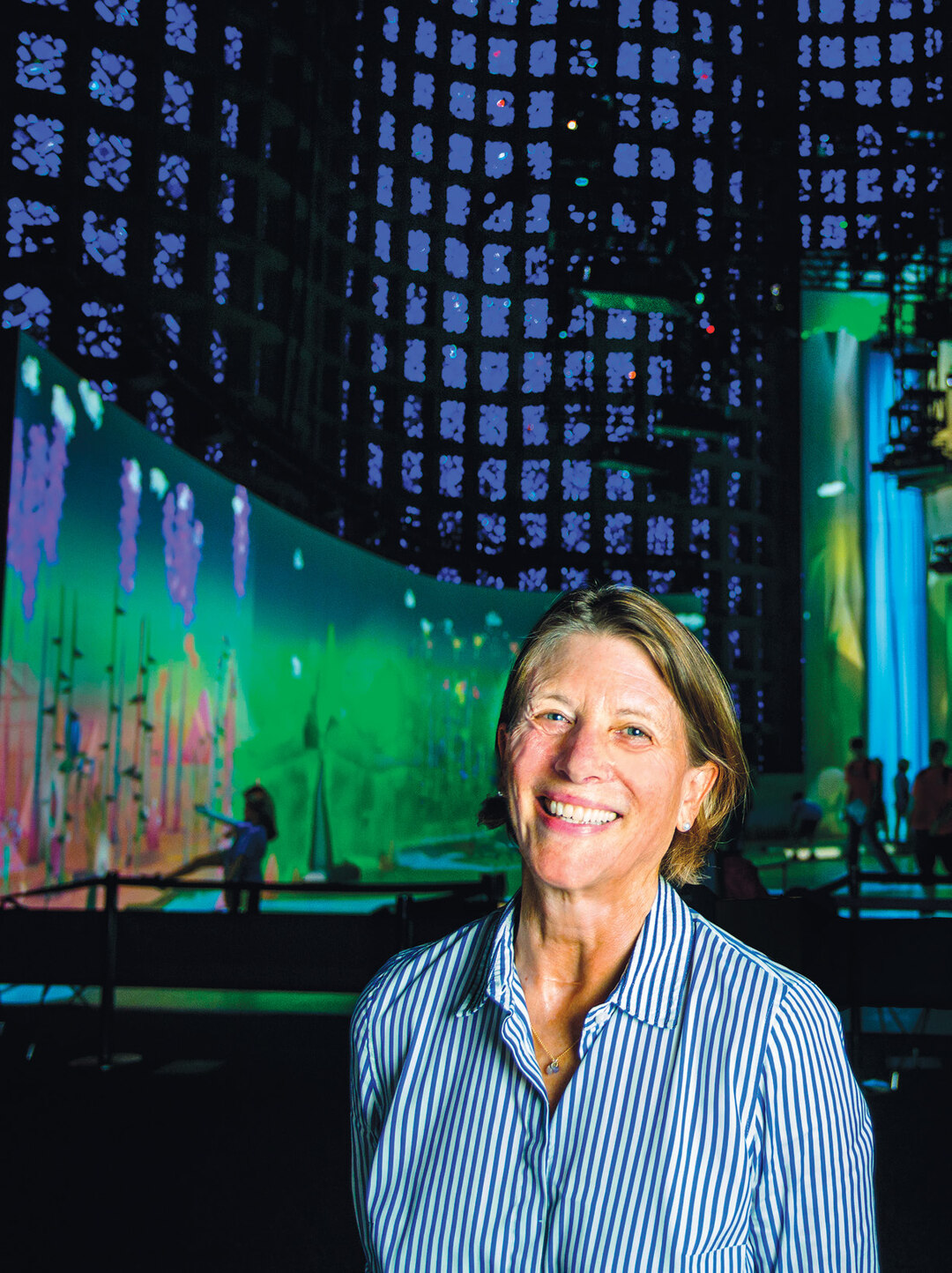