from 'NMH Departments and Programs 2021' 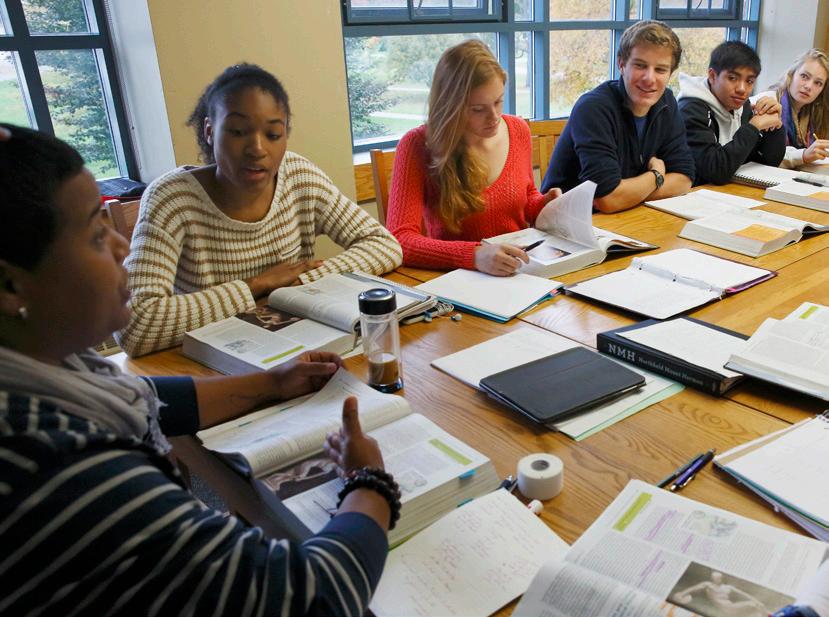 That’s the philosophy of the New York Hall of Science and its CEO, Margaret Honey ’74.

In a desert landscape dotted with tumbleweed and prickly pears, three purple roadrunners, heads crested with feathers, scoot from cactus to cactus. Meanwhile, just feet away, an 18-foot waterfall tumbles down a rocky ledge and flows into a reservoir. Beyond that, above a grassy plain full of wildflowers, butterflies flutter. These ecosystems and several others stand side by side in the middle of Queens, New York — in a 2,300-square-foot digital installation at the New York Hall of Science (NYSCI).

The exhibition, called “Connected Worlds,” is fun and fantastical, with colorful animated images projected onto giant screens, and cutting-edge technologies such as location tracking, gesture sensing, and global environmental and social databases bringing the images to life. It’s also firmly rooted in principles of cognitive science, particularly the study of how people learn by playing — a field that is the passion of NYSCI’s president and CEO, Margaret Honey ’74.

Visitors to NYSCI’s Maker Space and Design Lab (above, left) get busy building. The museum’s “Connected Worlds” exhibit (above, right) is a high-tech, interactive ecology lesson.

“We want to make science really compelling to young people,” says Honey of NYSCI’s mission. “All our installations and exhibits are designed for students to be problem solvers, not just viewers.”

Last June, for example, a group of fourth graders explored “Connected Worlds,” making each ecosystem literally come alive. They were charged with maintaining the health of each habitat, so they planted virtual seeds by moving their hands in front of the screens, and, with play logs, they diverted water from the waterfall and reservoir into virtual streams that flowed along the floor. Once each landscape had enough water to sustain life, animated animals such

as the roadrunners and butterflies popped up.

Located in Flushing Meadows Park, in the Corona neighborhood in Queens, NYSCI is part contemporary art gallery, part science lab, part design studio, part funhouse. Honey is its maestro. The museum was built for the 1964 World’s Fair, but it has evolved into an interactive, youth-friendly space focused on science, technology, engineering, and math (STEM). It houses close to 450 exhibits, workshops, and interactive activities that serve a half million students, teachers, and families each year.

Honey took the NYSCI helm a decade ago, as an expert in the field of learning design — understanding how children absorb and implement new information, and creating activities that allow that learning to happen. With a doctorate

in developmental psychology, she helped pioneer, in the 1980s, the use of digital technologies, like those at work in “Connected Worlds,” to support children’s learning across the STEM disciplines.

At NYSCI, she has overseen more than $50 million in renovations, established new community programs to better connect the museum with its Queens neighborhood, and begun hosting the World Maker Faire New York, a STEM extravaganza that draws roughly 90,000 visitors over the course of a weekend every fall. Honey’s bigpicture vision for NYSCI comes through in a piece she wrote for the Huffington Post several years ago: She believes the U.S. must “broaden participation in STEM for young people in general,” and she cited a startling statistic from

“ WE WANT TO MAKE SCIENCE REALLY COMPELLING TO YOUNG PEOPLE, SO THEY CAN BE PROBLEM SOLVERS, NOT JUST VIEWERS.”

the Department of Labor — that 65 percent of today’s schoolchildren will end up in STEM-focused jobs that do not even exist yet. “Students engage most readily with STEM when they get firsthand understanding of how it impacts their lives,” she wrote. The NYSCI is a place where they can do that.

Sitting in a big, sunny office

filled with books, Honey describes a class she took at NMH more than four decades ago that had nothing to

do with science or math. English teacher Nick Fleck assigned the book Summerhill, about a British boarding school where children make the rules. “It completely captured my imagination,” Honey says.

That idea of self-designed education led her to Hampshire College, where she studied psychology and philosophy — a mélange that underpins her work today. She went on to Columbia for her Ph.D. During graduate school, she took a job with Children’s Television Workshop, which created “Sesame Street” and brought user-friendly

educational programming to the American public. She was part of the Children’s Computer Workshop division in the early 1980s and developed interactive computer games featuring “Sesame Street” characters. “I was passionate about the nexus of media, learning, and technology,” Honey says.

She shifted her attention to science education in the mid-1980s, when she joined the Center for Children and Technology at Bank Street College of Education in New York. She was part of a team that produced “The Voyage of the Mimi,” a series that aired on PBS and was repackaged and sold to schools. “The show was deeply anchored in math and science,” Honey explains. In it, the crew of a ship called “Mimi” explored the ocean and studied marine life. A young Ben Affleck was one of the lead actors, playing the role of the grandson of the ship’s captain.

She developed software and a curriculum based on the show; students could play “Mimi” games on computers, and learn about sea creatures and plants in different ocean habitats as they followed the ship around the world in their classrooms. Honey saw from the kids’ reactions and comments that there was something irresistible about learning through playful storytelling. “No teacher could pass up having it in the classroom. The students not only learned, but became emotionally connected to their learning.”

Honey continued to work as a learning specialist and curriculum developer at Bank Street, then at the global nonprofit Educational Development Center (EDC), where she became widely known for using new digital technologies to help kids learn science and math. Eventually, she caught the attention of the NYSCI.

“I’d never worked in a museum,” Honey says. Yet, in a way, NYSCI was similar to the work Honey had done with the “Mimi” and other projects. Like many experts in learning design, she rejects the

The NYSCI’s teenage docents, called “Explainers” (at right, top), know almost as much about the museum as Honey (right, bottom). The NYSCI’s distinctive home in Queens, New York (below) was originally built for the 1964 World’s Fair.

idea of top-down “instruction” and “delivery” of material from a teacher to students. That’s not a productive means of education, she says. She believes that people — children, especially — need interactive, hands-on activities to help them connect with what they’re learning.

Because of her academic background and connections, Honey has brought vast resources to NYSCI. To create “Connected Worlds,” she assembled a team of consultants that counted among its ranks professors from Columbia’s Center for International Earth Science Information Network, Yale’s Cognitive Science Department, New York University’s Games for Learning Institute, the MIT Media Lab, and the Center for Collective Intelligence at MIT’s Sloan School of Management.

She also expanded the role of NYSCI’s Research, Exhibits, and Program department, a creative team that consists of 60 people, including 12 Ph.D.’s., education specialists, and science educators.

Besides its interactive exhibits, NYSCI has a Design Lab and a Maker Space, where children can experiment and tinker just as scientists and engineers do. They learn about physics by creating pathways on a pegboard with rubber bands and golf spikes, and rolling a ball down them to see in which direction it will head. They build structures out of PVC pipes, design prototypes that solve a problem, and learn how to use tools and write code.

“NO OTHER SCIENCE CENTER DOES WHAT NYSCI DOES, AND MARGARET LED US HERE.”

Honey is especially proud of NYSCI’s “Explainers” program, in which young-adult docents lead museum tours and give live-science demonstrations to visitors — such as demonstrating how hot-air balloons work by holding an inverted plastic bag over a hot plate and seeing it fill up and lift off. The Explainers program is the “heart and soul” of the institution, Honey says, bringing in youth from neighborhoods around the museum to serve as educators and role models for younger visitors.

Abraham Bautista has worked as an Explainer at NYSCI since 2014, when he was a student at Flushing High School in Queens. He now studies economics at Hunter College, but still likes his job “floating” among the museum’s learning areas, giving demonstrations and guiding visitors as they play and explore.

“I came here as a child, and I love watching kids at NYSCI learn just like I did. It’s like seeing the next generation of Explainers at work,” he says.

The museum has grown more firmly rooted in the local community, even as it draws visitors from across the New York metro area and beyond. Corona, like much of the borough, is known as one of the most international, multilingual areas of New York, and Honey sees it as the bedrock of the museum’s identity. “I love my job,” she says, “but what I’m most proud of is that NYSCI is known as a place that serves a diverse community.”

Honey has overseen the establishment of NYSCI’s preschool and after-school programs, and community events such as a neighborhood “block party” each June. She has also strengthened the bond between NYSCI and neighborhood schools, including the Leonardo Da Vinci Intermediate School 61. Assistant principal Stacey Burgoyne says that NYSCI’s classroom curriculum “has become more relevant than ever for our students.” The museum also offers professional development programs for the school’s teachers, and Burgoyne says that “having NYSCI open its doors after school

to the community affords students and parents the opportunity to experience an extension of the classroom work learners engage in each day.”

Melissa Vail, a co-chair of NYSCI’s board of directors, says, “We used to fight against the challenge of our Corona location because people didn’t want to travel here from other boroughs, especially Manhattan.” Honey changed all that. Now, Vail says, “no other science center does what we do, and Margaret led us here.” [NMH]

This story is from:
NMH Magazine 2018 Fall
by Northfield Mount Hermon