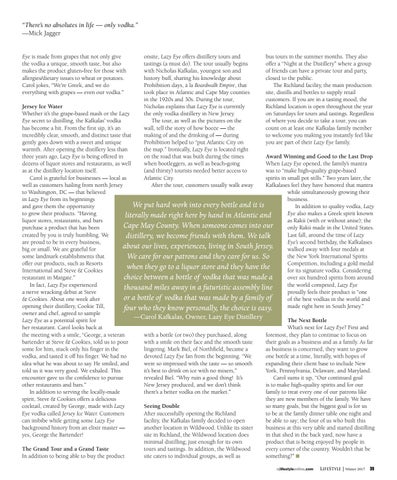 “There’s no absolutes in life — only vodka.” —Mick Jagger Eye is made from grapes that not only give the vodka a unique, smooth taste, but also makes the product gluten-free for those with allergies/dietary issues to wheat or potatoes. Carol jokes, “We’re Greek, and we do everything with grapes — even our vodka.”

onsite, Lazy Eye offers distillery tours and tastings (a must do). The tour usually begins with Nicholas Kafkalas, youngest son and history buff, sharing his knowledge about Prohibition days, à la Boardwalk Empire, that took place in Atlantic and Cape May counties in the 1920s and 30s. During the tour, Nicholas explains that Lazy Eye is currently the only vodka distillery in New Jersey. The tour, as well as the pictures on the wall, tell the story of how booze — the making of and the drinking of — during Prohibition helped to “put Atlantic City on the map.” Ironically, Lazy Eye is located right on the road that was built during the times when bootleggers, as well as beach-going (and thirsty) tourists needed better access to Atlantic City. After the tour, customers usually walk away

bus tours in the summer months. They also offer a “Night at the Distillery” where a group of friends can have a private tour and party, closed to the public. The Richland facility, the main production site, distills and bottles to supply retail customers. If you are in a tasting mood, the Richland location is open throughout the year on Saturdays for tours and tastings. Regardless of where you decide to take a tour, you can count on at least one Kafkalas family member to welcome you making you instantly feel like you are part of their Lazy Eye family.

Jersey Ice Water Whether it’s the grape-based mash or the Lazy Eye secret to distilling, the Kafkalas’ vodka has become a hit. From the first sip, it’s an incredibly clear, smooth, and distinct taste that gently goes down with a sweet and unique warmth. After opening the distillery less than three years ago, Lazy Eye is being offered in Award Winning and Good to the Last Drop dozens of liquor stores and restaurants, as well When Lazy Eye opened, the family’s mantra as at the distillery location itself. was to “make high-quality grape-based Carol is grateful for businesses — local as spirits in small pot stills.” Two years later, the well as customers hailing from north Jersey Kafkalases feel they have honored that mantra to Washington, DC — that believed while simultaneously growing their in Lazy Eye from its beginnings business. We put hard work into every bottle and it is and gave them the opportunity In addition to quality vodka, Lazy to grow their products. “Having Eye also makes a Greek spirit known literally made right here by hand in Atlantic and liquor stores, restaurants, and bars as Rakii (with or without anise); the Cape May County. When someone comes into our purchase a product that has been only Rakii made in the United States. created by you is truly humbling. We Last fall, around the time of Lazy distillery, we become friends with them. We talk are proud to be in every business, Eye’s second birthday, the Kafkalases about our lives, experiences, living in South Jersey. big or small. We are grateful for walked away with four medals at some landmark establishments that the New York International Spirits We care for our patrons and they care for us. So offer our products, such as Resorts Competition, including a gold medal when they go to a liquor store and they have the International and Steve & Cookies for its signature vodka. Considering choice between a bottle of vodka that was made a restaurant in Margate.” over six hundred spirits from around In fact, Lazy Eye experienced the world competed, Lazy Eye thousand miles away in a futuristic assembly line a nerve wracking debut at Steve proudly feels their product is “one or a bottle of vodka that was made by a family of & Cookies. About one week after of the best vodkas in the world and opening their distillery, Cookie Till, made right here in South Jersey.” four who they know personally, the choice is easy. owner and chef, agreed to sample —Carol Kafkalas, Owner, Lazy Eye Distillery Lazy Eye as a potential spirit for The Next Bottle her restaurant. Carol looks back at What’s next for Lazy Eye? First and the meeting with a smile, “George, a veteran with a bottle (or two) they purchased, along foremost, they plan to continue to focus on bartender at Steve & Cookies, told us to pour with a smile on their face and the smooth taste their goals as a business and as a family. As far some for him, stuck only his finger in the lingering. Mark Biel, of Northfield, became a as business is concerned, they want to grow vodka, and tasted it off his finger. We had no devoted Lazy Eye fan from the beginning. “We one bottle at a time, literally, with hopes of idea what he was about to say. He smiled, and were so impressed with the taste — so smooth expanding their client base to include New told us it was very good. We exhaled. This it’s best to drink on ice with no mixers,” York, Pennsylvania, Delaware, and Maryland. encounter gave us the confidence to pursue revealed Biel. “Why ruin a good thing! It’s Carol sums it up, “Our continued goal other restaurants and bars.” New Jersey produced, and we don’t think is to make high-quality spirits and for our In addition to serving the locally-made there’s a better vodka on the market.” family to treat every one of our patrons like spirit, Steve & Cookies offers a delicious they are new members of the family. We have cocktail, created by George, made with Lazy Seeing Double so many goals, but the biggest goal is for us Eye vodka called Jersey Ice Water. Customers After successfully opening the Richland to be at the family dinner table one night and can imbibe while getting some Lazy Eye facility, the Kafkalas family decided to open be able to say; the four of us who built this background history from an elixir master — another location in Wildwood. Unlike its sister business at this very table and started distilling yes, George the Bartender! site in Richland, the Wildwood location does in that shed in the back yard, now have a minimal distilling; just enough for its own product that is being enjoyed by people in The Grand Tour and a Grand Taste tours and tastings. In addition, the Wildwood every corner of the country. Wouldn’t that be In addition to being able to buy the product site caters to individual groups, as well as something?” n njlifestyleonline.com