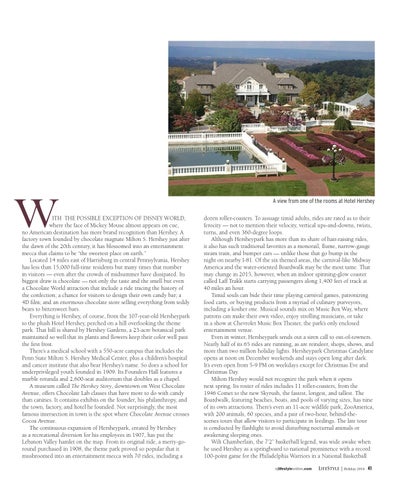 ITH THE POSSIBLE EXCEPTION OF DISNEY WORLD, where the face of Mickey Mouse almost appears on cue, no American destination has more brand recognition than Hershey. A factory town founded by chocolate magnate Milton S. Hershey just after the dawn of the 20th century, it has blossomed into an entertainment mecca that claims to be “the sweetest place on earth.” Located 14 miles east of Harrisburg in central Pennsylvania, Hershey has less than 15,000 full-time residents but many times that number in visitors — even after the crowds of midsummer have dissipated. Its biggest draw is chocolate — not only the taste and the smell but even a Chocolate World attraction that include a ride tracing the history of the confection; a chance for visitors to design their own candy bar; a 4D film; and an enormous chocolate store selling everything from teddy bears to bittersweet bars. Everything is Hershey, of course, from the 107-year-old Hersheypark to the plush Hotel Hershey, perched on a hill overlooking the theme park. That hill is shared by Hershey Gardens, a 23-acre botanical park maintained so well that its plants and flowers keep their color well past the first frost. There’s a medical school with a 550-acre campus that includes the Penn State Milton S. Hershey Medical Center, plus a children’s hospital and cancer institute that also bear Hershey’s name. So does a school for underprivileged youth founded in 1909. Its Founders Hall features a marble rotunda and 2,600-seat auditorium that doubles as a chapel. A museum called The Hershey Story, downtown on West Chocolate Avenue, offers Chocolate Lab classes that have more to do with candy than canines. It contains exhibits on the founder, his philanthropy, and the town, factory, and hotel he founded. Not surprisingly, the most famous intersection in town is the spot where Chocolate Avenue crosses Cocoa Avenue. The continuous expansion of Hersheypark, created by Hershey as a recreational diversion for his employees in 1907, has put the Lebanon Valley hamlet on the map. From its original ride, a merry-goround purchased in 1908, the theme park proved so popular that it mushroomed into an entertainment mecca with 70 rides, including a

A view from one of the rooms at Hotel Hershey dozen roller-coasters. To assuage timid adults, rides are rated as to their ferocity — not to mention their velocity, vertical ups-and-downs, twists, turns, and even 360-degree loops. Although Hersheypark has more than its share of hair-raising rides, it also has such traditional favorites as a monorail, flume, narrow-gauge steam train, and bumper cars — unlike those that go bump in the night on nearby I-81. Of the six themed areas, the carnival-like Midway America and the water-oriented Boardwalk may be the most tame. That may change in 2015, however, when an indoor spinning-glow coaster called Laff Trakk starts carrying passengers along 1,400 feet of track at 40 miles an hour. Timid souls can bide their time playing carnival games, patronizing food carts, or buying products from a myriad of culinary purveyors, including a kosher one. Musical sounds mix on Music Box Way, where patrons can make their own video, enjoy strolling musicians, or take in a show at Chevrolet Music Box Theater, the park’s only enclosed entertainment venue. Even in winter, Hersheypark sends out a siren call to out-of-towners. Nearly half of its 65 rides are running, as are reindeer, shops, shows, and more than two million holiday lights. Hersheypark Christmas Candylane opens at noon on December weekends and stays open long after dark. It’s even open from 5-9 PM on weekdays except for Christmas Eve and Christmas Day. Milton Hershey would not recognize the park when it opens next spring. Its roster of rides includes 11 roller-coasters, from the 1946 Comet to the new Skyrush, the fastest, longest, and tallest. The Boardwalk, featuring beaches, boats, and pools of varying sizes, has nine of its own attractions. There’s even an 11-acre wildlife park, ZooAmerica, with 200 animals, 60 species, and a pair of two-hour, behind-thescenes tours that allow visitors to participate in feedings. The late tour is conducted by flashlight to avoid disturbing nocturnal animals or awakening sleeping ones. Wilt Chamberlain, the 7’2” basketball legend, was wide awake when he used Hershey as a springboard to national prominence with a record 100-point game for the Philadelphia Warriors in a National Basketball njlifestyleonline.com