The Ormond House - Anything Goes 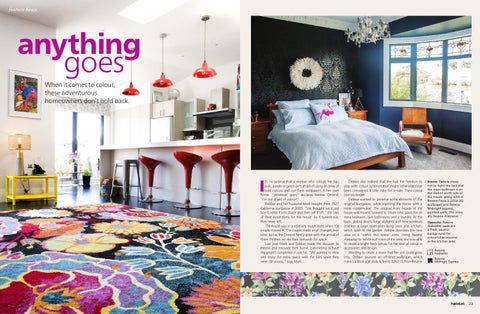 anything goes When it comes to colour, these adventurous homeowners don’t hold back.

t’s no surprise that a woman who colours her hair pink, purple or green isn’t afraid of using an array of bold colours and out-there wallpapers in her own home. “Whatever goes!’ declares Debbie Omond. “I’m not afraid of colour!” Debbie and her husband Mark bought their 1927 California bungalow in 2003. “We thought we’d just buy it, whip it into shape and then sell it off,” she says of their initial plans for the house. As it turned out, they never left. The house was in a relatively rough state when the couple moved in. The couple made small changes over time, but as the Omond family grew with the arrival of three children, so did their demands for space. Last year Mark and Debbie made the decision to extend and renovate their home, committing to have the project completed in one hit. “We wanted to relax and enjoy the extra space with the kids while they were still young,” says Mark.

Debbie also realised that she had the freedom to play with colour schemes that might otherwise have been considered a little risky for re-sale. Their colour journey began. Debbie wanted to preserve some elements of the original bungalow, while injecting the home with a more modern feel. The original front façade of the house was moved forward to create new space for an extra bedroom, two bathrooms and a laundry. At the back, sliding doors, large skylights and new windows envelop a large open-plan living area and kitchen, which open to the garden. Debbie describes this new area as a ‘watch this space’ zone. Using Resene Alabaster to ‘white out’ most of the area, she was able to create a bright fresh canvas for her love of colour in accessories and design. Wanting to create a room that her son could grow into, Debbie sourced an off-beat wallpaper, which mimics a brick wall (Kids &amp; Teens, 226713, from Resene

Left: Debbie carefully tore the edge of the Kids &amp; Teens wallpaper (226713) to give a deconstructed look to Dylan’s room. He chose the blue paint as much for its colour as the name: Resene Captain Cook. Below: Caleb’s room is a cool, genderneutral space painted in Resene Renew. Bottom: Amber now has her own room, gloriously painted in Resene Clementine Orange, a colour choice inspired by the spicy shades of India. Resene Captain Cook

Left and below: In one exuberant expression of colour, Debbie chose a Paradise wallpaper (Petula Black 98363) from Resene ColorShops for the living room, along with Resene Alabaster walls. The family are, from left, Dylan, Caleb, Debbie, Amber and Mark.

ColorShops). She meticulously tore the paper’s edge to create a gap-in-the-wall effect to merge with the painted surface beside it. Eight year-old Dylan felt it was important that the shade of blue he chose for his room had a good name; Resene Captain Cook made the final cut. A second bedroom was decorated for the couple’s two younger children, Amber and Caleb, to share. Debbie chose Resene Renew, describing the green as a gender-neutral but on-trend halfway point between the preferences of the two siblings. “I thought; we’ll go with batman-ey pops of bright yellow for Caleb and bright pink accessories for Amber.” The children, however, had their own views and were soon lobbying for their own rooms. Inspired by the traditions and colours of India, Debbie then converted a smaller playroom into a glowing hideaway for her daughter, using Resene Clementine Orange from the Karen Walker collection. “I looked at the other rooms and thought – what haven’t I tried?” A hot pink canopy bed was found to contrast beautifully with the vibrant orange walls. For the main bedroom, she chose to embrace rather than compensate for the south-facing orientation with dark colours. Her aim was to set the tone to moody, romantic and luxurious. Using features of the now demolished lounge as a reference point, she sourced a matching mould for the ceiling cornice, and had a new leadlight created from photographs of originals. A contemporary version of an original chandelier that hung in the lounge is set off by the dark lustre of the embossed Resene Flock 3 wallpaper (2554-26) and Resene Midnight Express painted walls.

At the back of the house, new sliding doors and wide-profile aluminium windows blend with the character of the house. The weatherboards are Resene Lumbersider tinted to Resene Quarter Silver Chalice and the trims are Resene Alabaster.

that if you want your own dramatic wall treatment and can’t find a wallpaper to suit, you can order a customised one using your own choice of image from www.resene.com/wallprint?

“Each of my rooms are a little bit of a shock of colour – and they’ve all got their own story to tell,” explains Debbie. The new and spacious hallway, also clad in Resene Alabaster, is hung with two large floral print lampshades, which link the jewel-box colours of the bedrooms to the living space beyond. The renovations were completed within six months and Debbie grins proudly when she comments that, as resident project manager, she was able to bring the work in $1000 under budget. Mark also praises their builder Brad Tautahi (of BT Building Projects) for his unfailing patience and willingness to take on the couple’s ideas. To soften the impact of new aluminium joinery used throughout the home, Debbie specified deep-set windowsills, both inside and out, and stood alongside as each sill was measured to her exacting standards. With a background in graphic design and project management, Debbie will soon complete an interior design degree and has recently launched her own design business, Compose Interiors. In future, there are plans for Mark’s converted freight-container office in the garden to become an outdoor den for the children as they move into their teens. For now though, the Omonds are happily enjoying the new-found space inside their home, where there is all the colour and drama to transport them to a perpetually sunny place without the need to even step outside the door. pictures and words Nicola Edmonds

turn the page for alternative looks for Dylan’s bedroom...

The Ormond House - Anything Goes

When it comes to colour, these adventurous homeowners don't hold back. Habitat Magazine