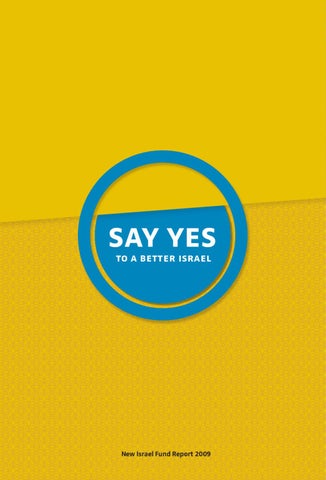 say yes to a better israel

New Israel Fund is the leading organization committed to equality and democracy for all Israelis.

Dear Friends, even as the global economic crisis is battering Israel’s civil society, NIF, Shatil and our family of grantees are proud to report significant progress to you, our donors and friends. Today, with your help, we are expanding efforts to increase opportunities for Arabs and Jews to live together in Israel’s mixed cities. We are organizing coalitions of long-time residents and new Israelis, secular and religious, social activists and businesspeople to reject extremism and ultra-nationalism. We are working overtime to assist Israel’s most critically-needed organizations survive the economic crisis so that they, in turn, can assist the underprivileged and marginalized who are most at risk. And we are defending Israeli democracy from the mindset that there is only one way to be “pro-Israel.”

Of course, NIF is not unaffected by the decrease in philanthropic dollars available in these difficult times. Consequently, we decided some months ago not to invest in a full-fledged annual report this year. Instead, we have prepared this midyear report, which provides current financial information and an update about some of our achievements on important issues of civil rights, social justice, and religious pluralism. Please join with the New Israel Fund to say yes to a better Israel. We know this is a difficult year for many people, but if you are in a position to increase your contribution, and even better to recruit your friends and family members to the New Israel Fund family, we will be especially grateful for your efforts. We’re counting on you to help us make a difference. Sincerely, Naomi Chazan Larry Garber Eliezer Yaari

NIF Mission: Our 30th Year the new israel fund (nif) is the leading organization advancing democracy and equality for all Israelis. We believe that Israel can live up to its founders’ vision of a state that ensures complete equality of social and political rights to all its inhabitants, without regard to religion, race, gender or national identity. Widely credited with building Israel’s progressive civil society from scratch, we have provided over $200 million to more than 800 cutting-edge organizations since our inception. We fight inequality, injustice and extremism because we understand that justice is the precondition for a successful democracy — and the only lasting road to peace. The New Israel Fund’s founders wanted to connect with Israel in a way that reflected their progressive values, and thousands of Israelis and Diaspora Jews have joined with us for that reason. Our supporters love Israel, and see it clearly as striving for an ideal not yet attained. Visit www.nif.org to learn more, and to join the growing community of progressive supporters of Israel who think for themselves about Israel’s future. 4

nif is at philanthropy’s cutting

edge thanks in large part to Shatil, the New Israel Fund’s Initiative for Social Change. NIF founded Shatil in 1982 to complement its grant-making and provide NIF grantees and other social change organizations with hands-on assistance, training, resources and workshops on various aspects of nonprofit management. Shatil employs more than 100 ethnically diverse professionals, support staff and interns, with offices in Jerusalem, Haifa, Be’er Sheva, Lod, Baqa Algharbiya and Rosh Pinah, serving nearly 1,400 organizations. Shatil has gained international respect for its innovative work and official UN recognition as an NGO advancing issues of interest to the UN. Shatil’s work brings together organizations in large coalitions to accomplish what no single group can achieve on its own. It also carries out special projects to foster citizen action on issues and among population groups neglected by other institutions. Today, Shatil takes the initiative in spearheading national advocacy and emergency campaigns.

After a Supreme Court petition by Palestinian residents and Bimkom — Planners for Planning Rights, the Israeli government decided to re-route the planned Security Barrier southeast of Jerusalem. Under the rejected plan, some 1,000 acres of Palestinian land would have been placed on the Israeli side of the Fence, making it inaccessible to Palestinian villagers. Following the 2007 protests by Follow-Up Committee for Arab Education, the Education Ministry began implementing a NIS 1.1 billion plan to build nearly 10,000 new classrooms in Israeli Arab schools by 2012.

justice is the precondition for a successful democracy – and the only lasting road to peace.

women’s rights An amendment to the Spouses Property Law will put an end to a husband’s ability to demand all the couple’s assets before agreeing to a divorce. The International Coalition for Agunah Rights formulated and lobbied for the new policy.

religious pluralism The Center for Women’s Justice appealed to Israel’s High Court against the Rabbinical Court of Appeals decision to nullify thousands of Orthodox conversions performed by the Israeli government’s Conversion Authority. In the wake of the annulment controversy, NIF worked to expand liberal Orthodox organizations and empower coalitions working against religious coercion and extremism.

For current coverage of NIF’s activities and accomplishments, please visit our website, www.nif.org and sign up to receive our weekly e-newsletter.

Defending Democracy israel’s democracy is vibrant and spirited, but sustaining it takes hard work and commitment from both progressive Israelis and their supporters around the world. This year saw the formation of a coalition government that includes extremist, ultra-nationalist parties who call for loyalty oaths for Arab citizens and the potential denationalization of at least a portion of Israel’s Arab population. Last winter’s Gaza war created an atmosphere in which dissent was repressed, the press was prevented access to the war zone, and post-war investigations compromised or rejected. Israel’s High Court, the last line of defense for human and civil rights, is still at risk of the politicization of its critically-

needed judicial independence. The inclusion of religious parties in the governing coalition continues the severe infringement of religious and personal freedom for the vast majority of Israelis. No one organization can tackle these threats alone, and that is why the New Israel Fund is so necessary. The coalitions we build, the organizations we empower, the activists we train, and the spectrum of skills and views we represent guarantee democracy in a still-young nation without a Constitution or Bill of Rights. From promoting transparency in Israel’s byzantine budget process to providing innovative civics education in Israeli schools, the NIF commitment to democratic values in action is demonstrated by 30 years of significant achievement.

hitting Israel’s most disadvantaged communities hard. Since Israel privatized many social programs more than a decade ago, NGOs have taken a larger role in providing a social safety net for the most vulnerable population groups in Israel. But those NGOs, too, are at risk — including the 100 or so organizations currently supported by the New Israel Fund. At the onset of the crisis last fall, NIF presented an action plan to the Knesset Finance Committee, outlining the need for government assistance to civil society. Among other measures, the plan called for the establishment of a $60 million emergency fund to award grants and bridging loans to organizations facing difficulties. In February, the government approved many measures suggested by the NIF plan.

nif works on the root causes of poverty – giving a voice to the voiceless.

Additionally, putting its 30 years of experience to work, NIF/Shatil began an immediate response effort to ensure that our organizations will survive the risk of contraction or even closure. Between Shatil’s consulting and training, and emergency funding and infrastructure assistance from NIF, many organizations have received the assistance they need to stay afloat in a challenging environment. So at a time of increasing unemployment, social justice organizations are playing watchdog on a right-wing government, ensuring that benefits are not reduced when they are most needed. After hatemongers incited tension in Israeli Arab cities, NIF, its partners and programs brought messages of co-existence and mutual respect. And with the political left in disarray, progressive civil society remains the most important voice advocating for justice and equality for all Israelis.

Joint Living the 2008 yom kippur riots in akko were a wakeup call for everyone concerned about Jewish-Arab relations within Israel. In one of Israel’s five mixed Jewish-Arab cities, the Akko riots reflected the strained relations between the two peoples throughout the country. An emphasis on joint living and what this means in theory and practice is now a top priority for the New Israel Fund. Rising tides of separatism in both Jewish and Arab communities further threaten Israel’s future as a multicultural and democratic society. According to a 2008 poll, 76% of Israeli Jews expressed support for Foreign Minister Avigdor Lieberman’s plan to “transfer” areas heavily populated by Israeli Arabs to a future Palestinian state. The war in Gaza further exacerbated tensions between the communities.

Since 2003, NIF/Shatil’s widely acclaimed Mixed Cities Project has been active in promoting equality in Israel’s mixed cities. As the only major organization with a significant focus and presence in all of Israel’s mixed cities, NIF/Shatil knows that tackling these societal divides are imperative to the health of Israeli democracy. Since its establishment, the Project has successfully frozen home demolition orders, established neighborhood residential forums promoting housing and education rights, and lobbied for fair allotment of public funding and services for all residents. Another joint living issue is addressed by NIF’s Kick it Out Israel program, which has helped reduce anti-Arab outbursts, and punish offenders, in Israel’s soccer stadiums. And in areas with large Arab and Bedouin populations, including the Triangle and Be’er Sheva in the Negev, Shatil’s offices are the ‘address’ for empowering community residents to work for their legal, social and economic rights.

civil, human and economic rights for israeli arabs is an issue crucial to the long-term survival of the state

Vision. For a better Israel Values. for social justice Impact. Because you can make a difference support NIF.

nif board of directors

For the year ended December 31, 2008 with summarized financial information for 2007

Change in net assets before other item

Net assets at beginning of year

NET ASSETS AT END OF YEAR

OTHER ITEM Transfer of assets Change in net assets

for more financial information and for a list of nif donors, visit www.nif.org