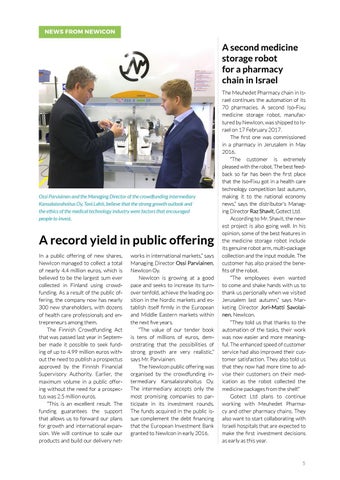 A second medicine storage robot for a pharmacy chain in Israel

Ossi Parviainen and the Managing Director of the crowdfunding intermediary Kansalaisrahoitus Oy, Toni Lahti, believe that the strong growth outlook and the ethics of the medical technology industry were factors that encouraged people to invest.

A record yield in public offering In a public offering of new shares, NewIcon managed to collect a total of nearly 4.4 million euros, which is believed to be the largest sum ever collected in Finland using crowdfunding. As a result of the public offering, the company now has nearly 300 new shareholders, with dozens of health care professionals and entrepreneurs among them. The Finnish Crowdfunding Act that was passed last year in September made it possible to seek funding of up to 4.99 million euros without the need to publish a prospectus approved by the Finnish Financial Supervisory Authority. Earlier, the maximum volume in a public offering without the need for a prospectus was 2.5 million euros. “This is an excellent result. The funding guarantees the support that allows us to forward our plans for growth and international expansion. We will continue to scale our products and build our delivery net-

works in international markets,” says Managing Director Ossi Parviainen, New­Icon Oy. NewIcon is growing at a good pace and seeks to increase its turnover tenfold, achieve the leading position in the Nordic markets and establish itself firmly in the European and Middle Eastern markets within the next five years. “The value of our tender book is tens of millions of euros, demonstrating that the possibilities of strong growth are very realistic,” says Mr. Parviainen. The NewIcon public offering was organised by the crowdfunding intermediary Kansalaisrahoitus Oy. The intermediary accepts only the most promising companies to participate in its investment rounds. The funds acquired in the public issue complement the debt financing that the European Investment Bank granted to NewIcon in early 2016.

The Meuhedet Pharmacy chain in Israel continues the automation of its 70 pharmacies. A second Iso-Fixu medicine storage robot, manufactured by NewIcon, was shipped to Israel on 17 February 2017. The first one was commissioned in a pharmacy in Jerusalem in May 2016. “The customer is extremely pleased with the robot. The best feedback so far has been the first place that the Iso-Fixu got in a health care technology competition last autumn, making it to the national economy news,” says the distributor’s Managing Director Raz Shavit, Gotect Ltd. According to Mr. Shavit, the newest project is also going well. In his opinion, some of the best features in the medicine storage robot include its genuine robot arm, multi-package collection and the input module. The customer has also praised the benefits of the robot. “The employees even wanted to come and shake hands with us to thank us personally when we visited Jerusalem last autumn,” says Marketing Director Jori-Matti Savolai­ nen, NewIcon. “They told us that thanks to the automation of the tasks, their work was now easier and more meaningful. The enhanced speed of customer service had also improved their customer satisfaction. They also told us that they now had more time to advise their customers on their medication as the robot collected the medicine packages from the shelf.” Gotect Ltd plans to continue working with Meuhedet Pharmacy and other pharmacy chains. They also want to start collaborating with Israeli hospitals that are expected to make the first investment decisions as early as this year.